Armed with plenty of water, bug spray, and a dog, Hannah and I set off up the steep initial climb of the Hell Canyon trail. There was only one other vehicle at the trail head parking lot, so it would be a quiet hike. 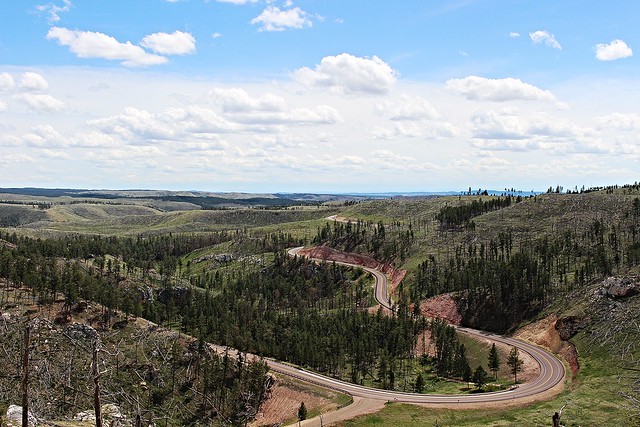 The Hell Canyon loop is a little under 6 miles and we took it at an enjoyable pace, stopping aplenty to revel in the beauty of the trail.  Within ten minutes of setting out, I spotted a cutleaf anemone, which I had never seen before except in pictures, and a little further ahead we started seeing rock clematis, another new one for me. A cluster of pasqueflowers caught the light, blooming later in the higher elevations west of Custer. 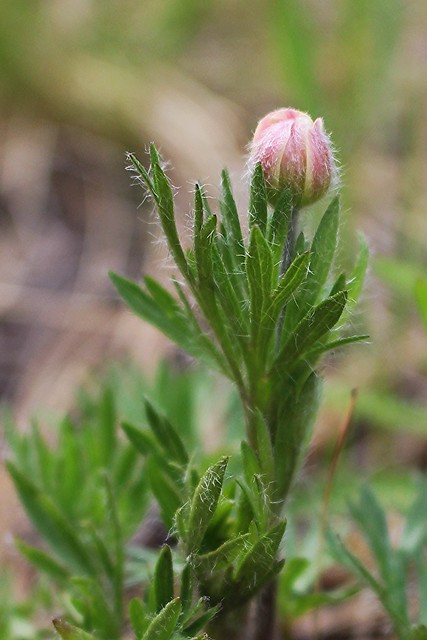 I pointed our a few more flowers, thrilled to be seeing such different flowers from my hikes on our ranch. “Those are some great flower names you’re making up,” Hannah teased. So the next new flower I saw, I asked, “Do you want to know what this one is called?” 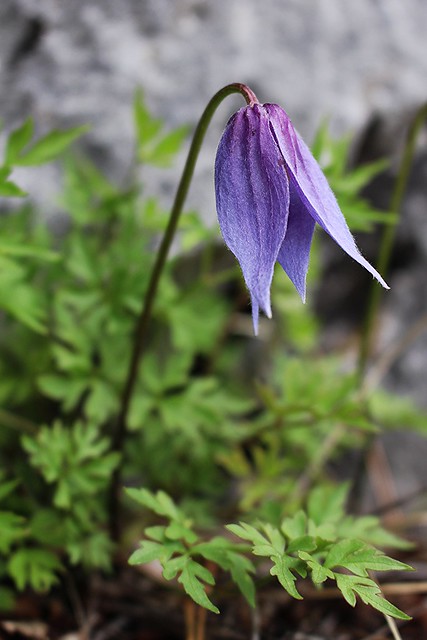 The remoteness of Hell Canyon is exhilarating. Hiking along the rim, we enjoyed the soaring vistas and plummeting slopes into the canyon’s center, the towering rock formations and the narrow trail, the silence and tranquility of the middle of nowhere. Remnants of once-great ponderosa pine trees evidenced the former thriving forest of Hell Canyon, stripped and desolate from past fires. 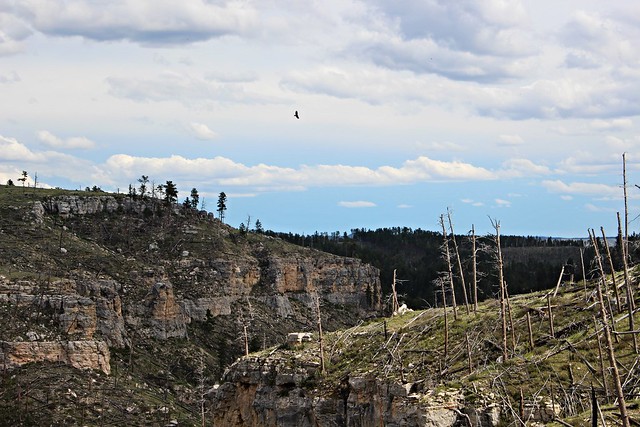 The dead and denuded ponderosa trunks still towered high, and the hillsides and canyon walls were covered with deadfall. Stumps were still black with soot. But Hannah pointed out an old burned-out tree stump, where last year there had been a black-eyed Susan growing out of the center. Deep and steep ravines were growing back full of of aspens, their pale green leaves bright in the sunlight. The wildflowers thrived, bearberry and phlox and prairie goldenpea, rock clematis and anemone and longspur violets, Nuttall’s violets and white milkwort and prairie smoke, and a single early stem of wild blue flax. Life from death. 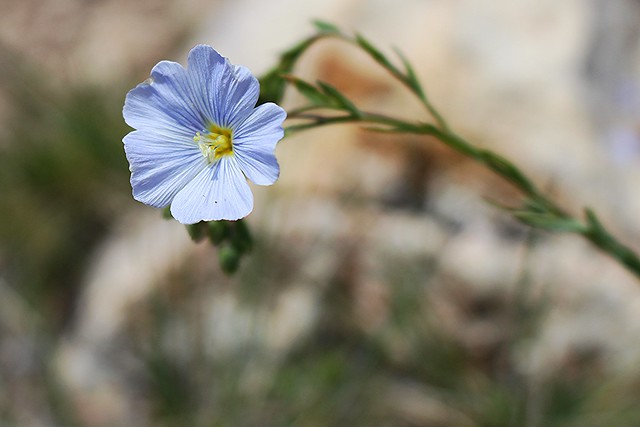 Ezekiel 36:26 says: “And I will give you a new heart, and a new spirit I will put within you. And I will remove the heart of stone from your flesh and give you a heart of flesh.” God takes our hearts of corruption and death and He renews them, breathes life into them. He takes our souls destined for the fires of Hell and cleanses them, purifies them, sanctifies us. Life from death. 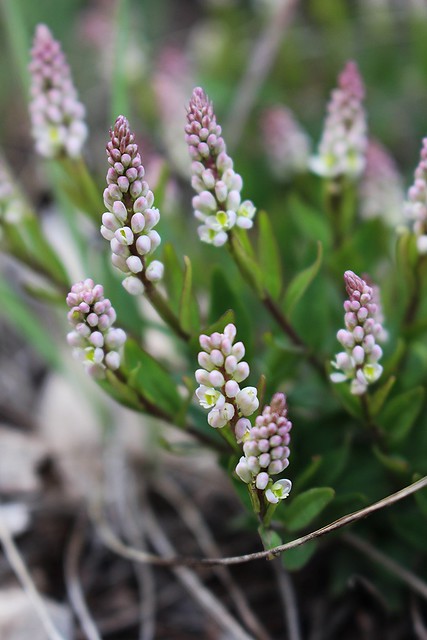 The trail traced along the rim of Hell Canyon, and then gradually dropped down into the greenness of the canyon itself. Down in the cool and shade, with carpets of longspur violets and Canada violets and rich, tall grass, it was hard to believe a fire had ever desolated the canyon. The ability God gives to His wonderful Creation to rejuvenate and regrow is astounding. 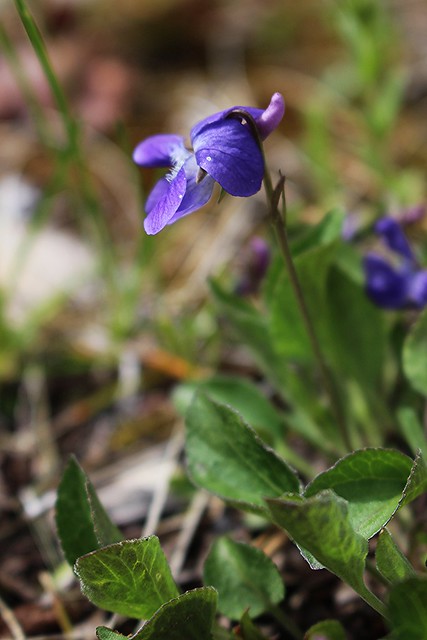 Chokecherry trees, larger than I had ever seen, lined a portion of the trail. A spring-fed ephemeral stream crisscrossed the trail a handful of times, eventually disappearing underground. The peace was sweet. It was like walking through a garden where God alone is the caretaker, undisturbed except for the faint foot-worn trail. Seeing the untouched, undefiled reaches of Creation, the sorrow and turmoil and suspense and violence of the world fade into the background – It is just about impossible to worry when deep in the woods, with trees and cliffs and blue sky soaring overhead, with the silence and joy bursts of birdsong, the chuckle of the creek, a soft breeze, and the companionship of a sister in Christ. Perhaps it is because I’m constantly being reminded of Someone far greater than myself, and being drawn out of my own selfish thoughts into the light of God’s goodness and majesty, revealed in His Creation. 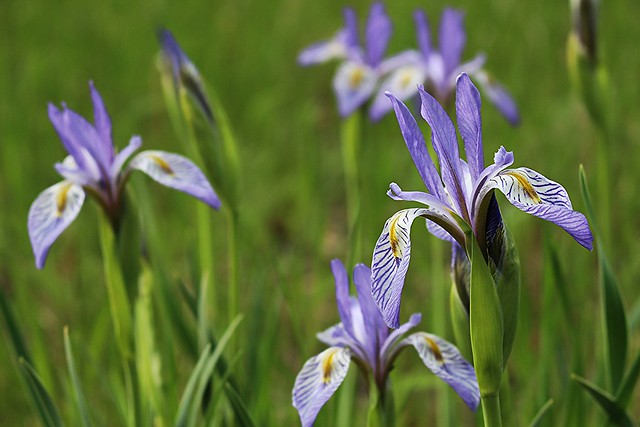 In Luke 12:25-28, Jesus exhorted His disciples: “And which of you by being anxious can add a single hour to his span of life? 26 If then you are not able to do as small a thing as that, why are you anxious about the rest? 27 Consider the lilies, how they grow: they neither toil nor spin, yet I tell you, even Solomon in all his glory was not arrayed like one of these. 28 But if God so clothes the grass, which is alive in the field today, and tomorrow is thrown into the oven, how much more will he clothe you, O you of little faith!”

One thought on “Hiking | Hell Canyon”