Okay, there’s another cat in the family…Actually, there are three, since Kashka had another litter of kittens back in April and somehow we ended up keeping all three. I have to say, it has been a delight. And Anna further delighted me by gifting me one of that litter. Ember was the first, a year and a half ago, and then this little adorable devil kitten was gifted to me just a few weeks ago or so. I almost refused her, but she snagged my affections pretty hard. 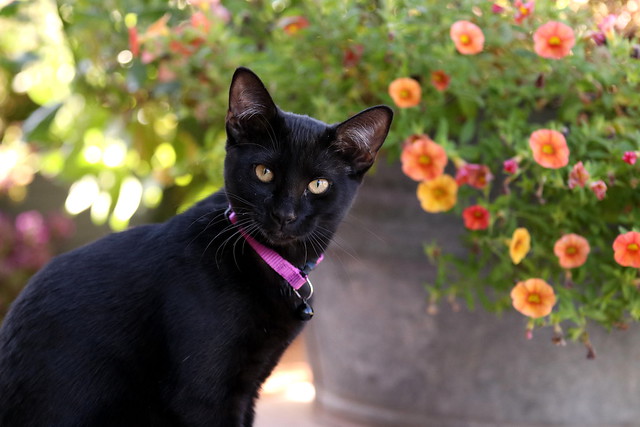 Of all the cats we have had, this one thrives on physical affection the most. We’ve never had a cat that would cuddle (and I mean cuddle) and submit to being held for a half hour or more at a time. I love it. She is terribly affectionate, purrs like a motorboat when I so much as look at her, attacks me while I sleep (one of her not so nice characteristics), and literally has climbed our walls. She’s hilarious.

I’m not generally an advocate for cat collars, unless, of course, they’re town cats and tend to be “about town” cats. However, we now have three black cats (Kashka isn’t very creative with the colors of kittens she has), and two of them are virtually identical, except one is a boy and Cinders is a girl. It is a little awkward to have to “check” each time I want to identify one from the other. Thence, the collar. Makes it a lot easier.

As a teenager, I would occasionally joke about one day being the crazy cat lady (I’ve always loved cats), always attaching it to a hypothetical future day when I was “old and single”, old at that time being 30. I never really thought it would happen since I was allergic to cats at that time, and I really didn’t think I’d still be single that far in the future. It was just something funny I’d say to get a reaction or something, when I was 16 or so and 30 seemed a loooong ways away. Well, I’m no longer allergic (to our cats, at any rate), and I’m “pushing 30”, as a dear relative reminded me more than a year ago. So I think I can say I’ve reached the status of crazy cat lady, especially when I wake up in the morning with two cats in my twin sized bed with me. It makes me smile.

I’ve said this before and I’ll say it again: God was so good to bless us with animals. So much was wrecked after Adam and Eve and their sin destroyed the purity and perfection of Creation. But God in His goodness has left so much beauty and joy and delight to cause us to wonder and marvel and praise Him. Little tastes of Eden.

We’ve had our share of rattlesnake encounters over the past few years, including three that our dad has killed up by my grandma’s house. So sorry, to anyone who might be offended by that. But Dad can’t hear the rattle, so it really is a matter of safety, and our uncle’s dog got bitten by one two years ago, so we’re inclined to have a little animosity towards the critters. But I digress. When I got home last night and saw one of the kittens headed towards something darkly colored and mottled and narrow lying in the grass, I had a little panic moment. I kind of love our cats. But when it didn’t strike them (and when I got more than a quarter-second impression and reaction), I inspected the critter closer and found this ugly cute salamander. 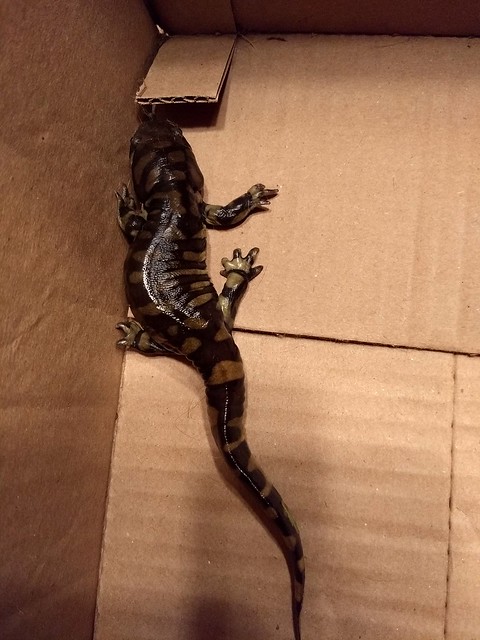 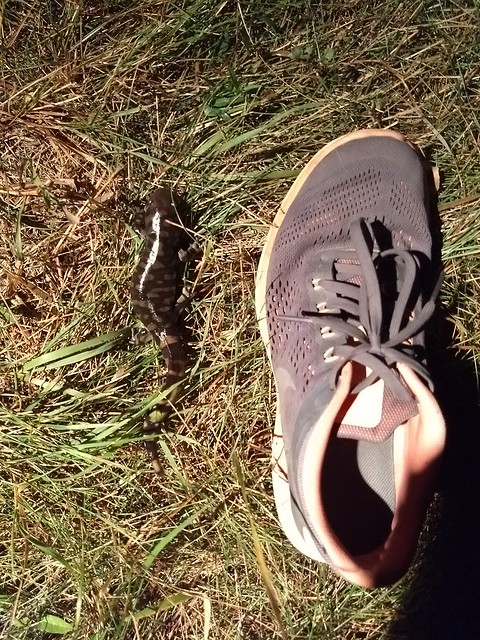 He was a large variety (the shoe is for scale), and wasn’t too happy the kittens were inspecting him. We’ve never really encountered these out here at our place, since there isn’t ever really any permanent moist-ness, but there he was. I scooped him into a box and deposited him a ways away, since I read that salamanders, including the western tiger salamander (this guy) are toxic to a certain extent and figured I’d get him out of the cats’ reach. I’d be more than happy for some input from anyone who knows more than the internet on this matter, especially since my experience is that the internet tends to exaggerate. For instance, I read that aloe is poisonous to cats, but I have a friend who had an aloe plant, until her cat ate it. The cat was fine.

Anyway, what a strange neighbor. 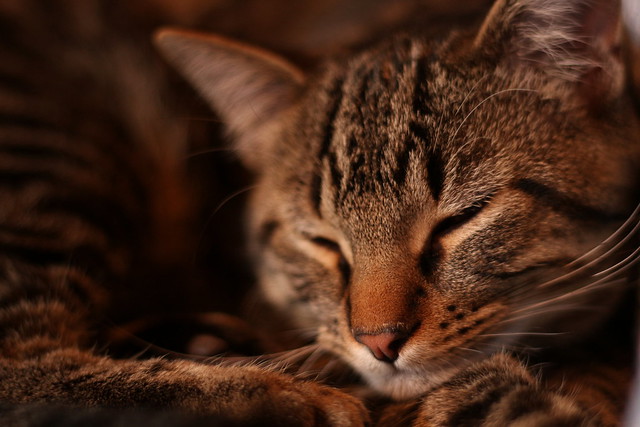 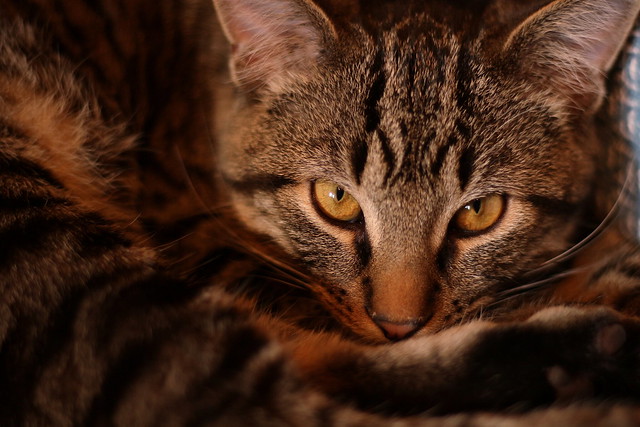 It always hurts to lose something you love, or someone, even if that someone is “just” a cat. I think we will all shed tears over this little critter, publicly or privately, and each miss him in our own way. He was Anna’s special cat, but all of us loved him. Even Dad, who always puts on a pretense of thinking that the critters are “just” critters and relatively useless ones at that, will miss Luna. Luna seemed like he was doing better day-before-yesterday, and seemed to be responding to our attempts to nurse him back to health, but he took a turn for the worse yesterday morning and fell asleep for good sometime this morning. We’ll miss his quirks and his cuddles.

We had Luna for 2 years, and his personality has always amused and delighted and befuddled us. His looks were like a scientific illustration of a cat – he was perfect, with a long, thick tail, a perfectly proportioned body, and beautiful pale eyes. But aside from his looks, nothing else was dignified about him. He’s the cat who, even when quite full-grown, would curl himself up ridiculously to “nurse” on his own belly fur, a habit that he caught on to doing when his sister, Koshka, apparently missing their mother, started sucking on his belly when they were just 2-month-old kittens. Koshka eventually grew out of the habit, but not Luna. He’s the one who fell in love with Jess’s dog who was here for the first 9 months that we lived in the Hills.  The two of them would love on each other, with Luna allowing Baby to groom him from head to tail. He’s the one we babied when he managed to get part of his tail degloved this winter when he got his tail closed in the front door, and he put up with our clumsy doctoring and his poor cone very patiently and sweetly. He was a forgiving cat.  He’s the one who would taunt the dogs, then turn on them, claws unsheathed, and send the dogs scattering hilariously. Luna always strutted around like he was some hotshot, and then would go do something stupid. It is kind of hard to believe that crazy, beautiful cat is gone. 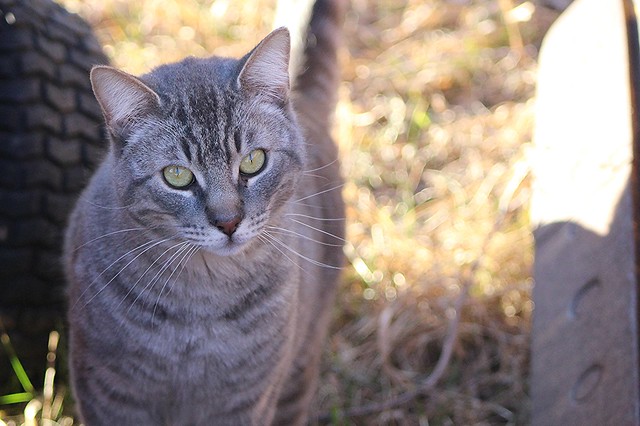 We all loved him.

Anna’s poor Luna-cat is sick. He is the big, beautiful boy who lost part of his tail this winter and who always seems to be getting into scrapes. A few days ago, he started acting funny, but given that he is kind of a weird cat already, he didn’t seem much weirder than usual. But it became clear he was not just weird but sick, so Anna and Mom took him to the vet yesterday, and it turns out he has kidney stones, which for a cat can be a pretty big deal. 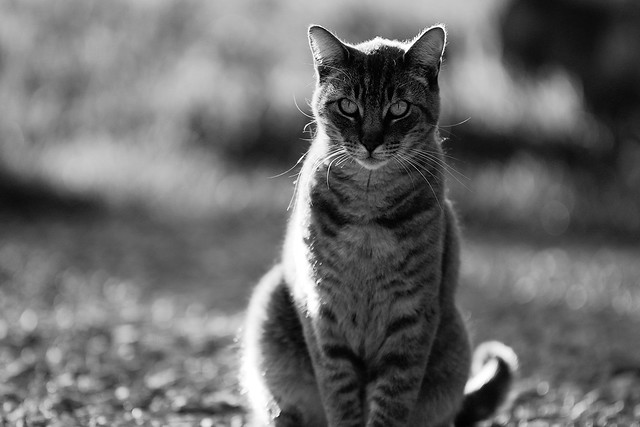 I don’t know what you think about praying for critters, but I believe that the God who created animals does care about those same critters. If not even a sparrow can fall to the ground outside the will of the Father, then I also know that poor Luna is seen by God, and that God cares. So when our critters are sick, they are in my prayers. But more than that, if you pray to Jesus, send up a little prayer for Anna, since Luna is her particular favorite and I know she’ll be really sad if she has to put him down. Unfortunately, veterinary costs of hundreds of dollars for a cat are just plain not something we can do (maybe…won’t do? They’re animals, not people. Great, now PETA will come and arrest me and PETA’s minions will excoriate me for being cruel and inhumane). If Luna doesn’t start showing some improvement in the next few days, Anna might have an unpleasant choice to make. The poor cat obviously doesn’t feel good, but he isn’t suffering right now, so we’ll see how he does over the next few days.

Pets are one of those multifaceted gifts that God gives, that kind of leave me bewildered. They bring such joy (and sadness at times), and there really is no explaining it. When I see the uniqueness of each of our critters, or cuddle a purring cat, or feel Ember pouncing my feet the nights I let her sleep inside (that’s supposed to be a secret, by the way), I wonder at God’s goodness and winsomeness in providing these not-so-simple joys. What is simple about the exquisite beauty of God’s handiwork? The God who created the planets and the universe also created the cat’s purr and the dog’s loyalty. What a great God. He didn’t need to do any of that. But He did.

Well, we’ve gotten pretty good at cat-doctoring, particularly with Luna degloving his tail back in December, so I’m hoping our doctoring will set him right. We’ll see, I guess.

Literally. Opal took herself on an adventure a few days ago, and showed back up 20 minutes later looking like this:

What can you do? Sarah wasn’t here, and I didn’t feel like trying to give Opal a bath without help (she’s not my dog, so why would I try, right?), so I just let her dry into a muddy fuzzball. She didn’t seem to care, so I didn’t either. Oh, the fun of mud in the bottom of the stock dam…