Everybody needs a friend who will just listen, without disagreeing or trying to “fix” everything. Poor Trixie is at that stage in life where she hears “no” and “no” and “no” more often than she hears anything else. But while our friends were out of town for a night and a day, Trixie had just the buddy she needed. 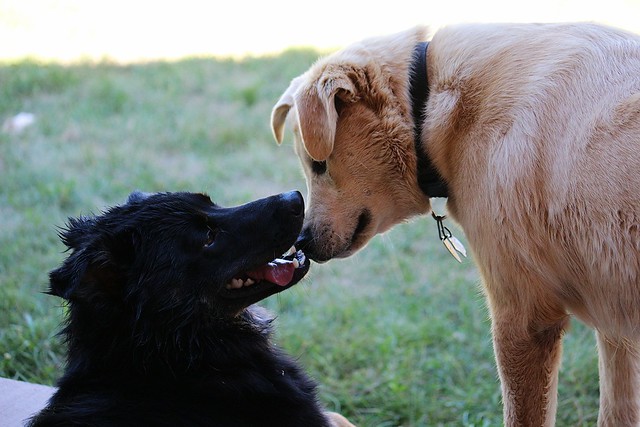 Cleo is a mature critter, compared with Ditsy Trixie, and actually kept Trixie in line for a day. Usually Trixie takes off at the first opportunity (or the first hint of boredom) and hightails it to a cabin-sized brushpile where rabbits live. Yesterday, though, she only ran off once, even though she was off leash for hours. I was impressed. 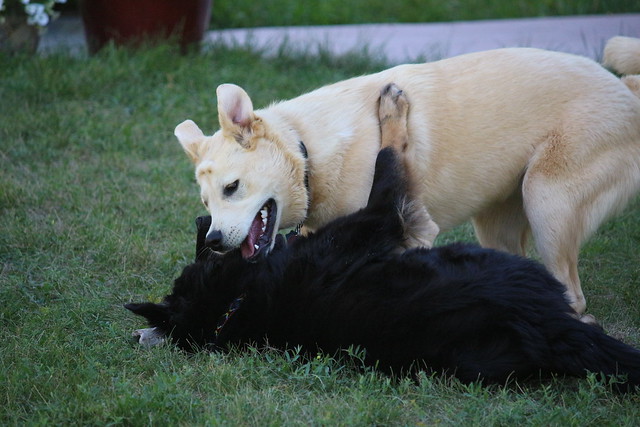 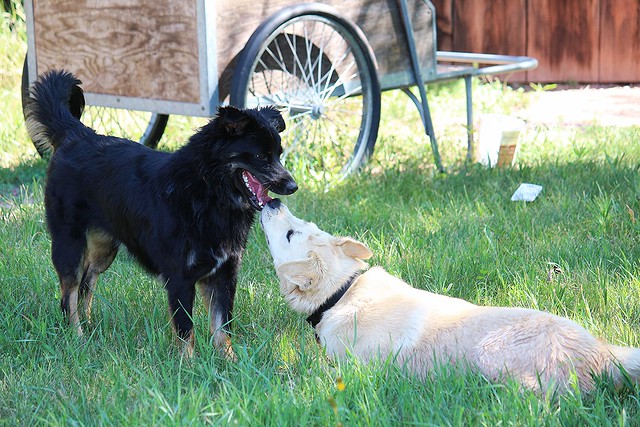 Those two pups were a hoot to watch. They ran pretty much without ceasing for probably two hours, stopping occasionally for a short breather, plopping down exhausted and panting, until Trixie would pester and Cleo would bolt. Then the games would resume. If they weren’t running, they were tussling, nipping at each other’s faces and feet and jumping all over each other. 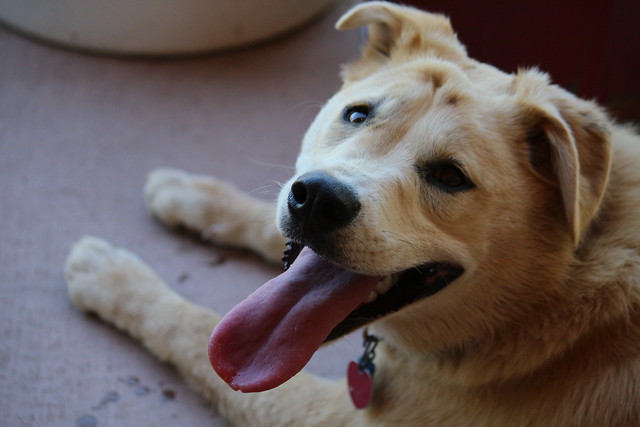 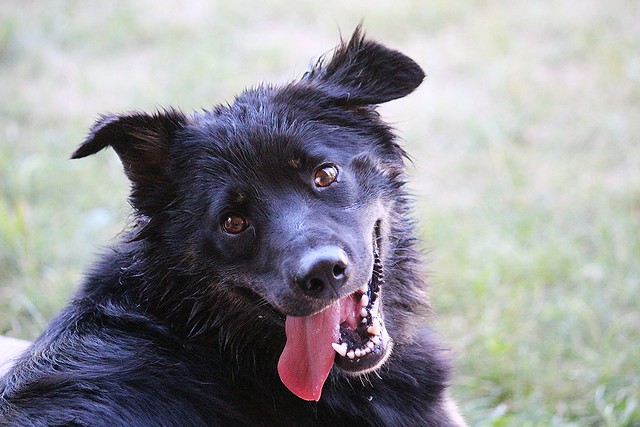 One good thing we learned is that Trixie has almost no territorial instinct. While it would be nice to have a dog with some guard-dog tendencies, it is nice to know that she is entirely unaggressive. Our old dog, Baby, would actively protect her space. Somehow, Trixie has no space. Or no personal space. Or both. 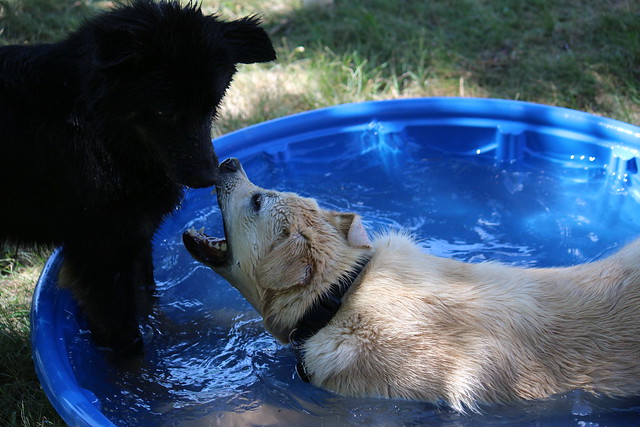 The temperature was reading in the 90s, and those girls were still zipping around the yard, sometimes stopping for a dip in the pool, then dashing off again. Trixie plunged her whole self into her pool, submerging her face and blowing bubbles. Cleo was much more dainty and ladylike. 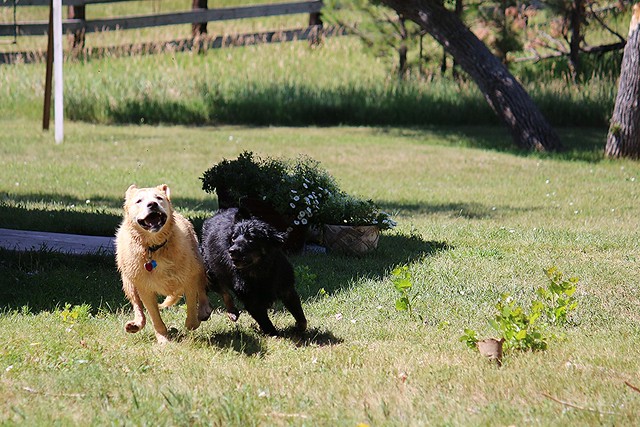 During one of their “breathers,” I got this series of photos where they look like they are laughing uproariously. Every time I look at the pictures, I can’t help but giggle! 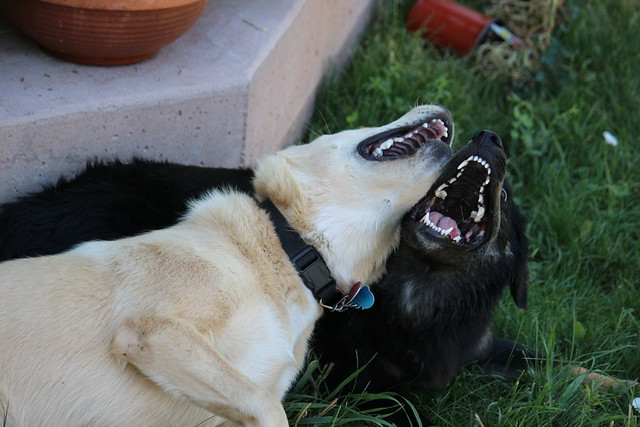 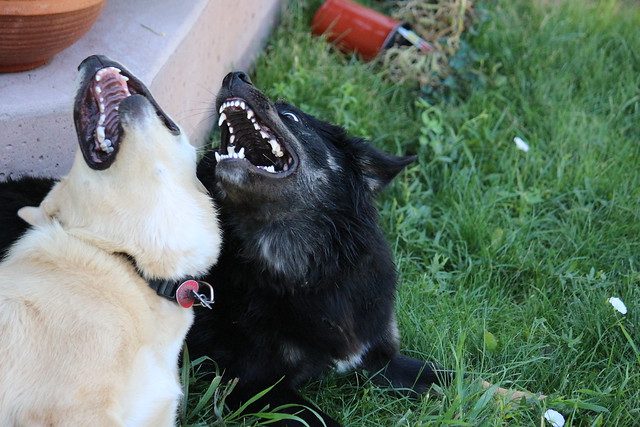 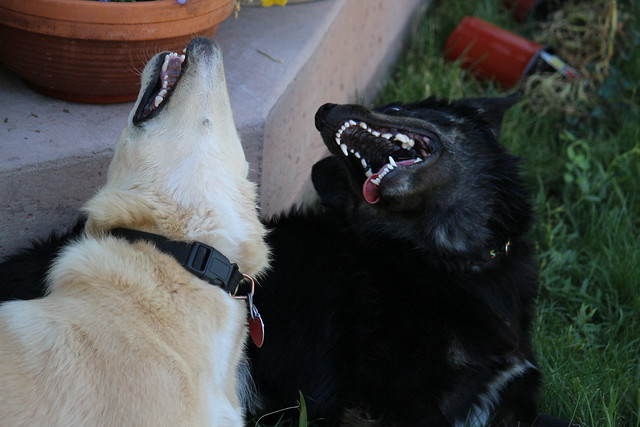 I always enjoy watching animals interact with one another. Whether it is watching calves playing on dirt piles, or horses frisking around a pasture, or laughing at the dog and cats as they try to work out their differences, or watching these two pups tear around the yard, I love seeing the interactions of God’s creatures. What a marvelous Creation God has placed us in!