One of the best things about Black Hills weather is the coolness of the summer evenings. Even a day that reaches into the 90s and 100s will cool down to a comfortable temperature by night. We’ve gotten into the habit of eating dinner outside, because by dinnertime it is often much cooler outside than inside the house. How lovely to watch the evening settle, to have our dog nearby, to watch for the cats coming prowling in from the pastures and sheds where they doze away their days, to see and hear the bluebirds and kingbirds and cicadas. 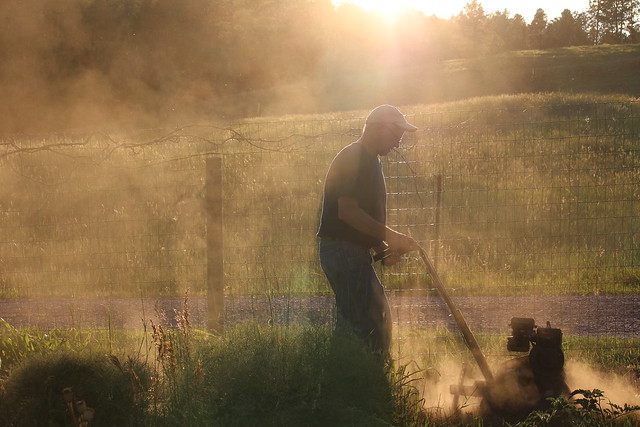 After dinner, we worked in the garden, pulling weeds, tilling, and watering. It is terribly dry in all of South Dakota, but the Black Hills region in particular is in a state of severe drought. Forest and grass fires are a significant risk right now, and ranchers are feeling the effects of the lack of rainfall. Hay crops have been a fraction of what they are in a good year, and gardens are hard to keep watered. There isn’t much of a happy medium in this part of the country. Either we’re getting hailed out and flooded, or we’re dry as a bare-picked bone. 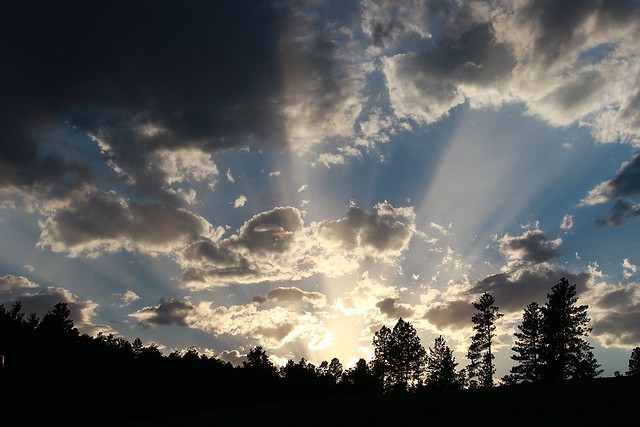 The sun set in a blaze of glories and we began to head towards the house. I was inside doing dishes when Mom called to me. “There’s a bat colony in the Miner’s Cabin!” she called. We had suspected as much about a month ago, but hadn’t verified this. I ran outside as fast as my sprained ankle would let me. She had already counted twelve bats leaving the Cabin attic, and we watched eight or nine more leave. What a sight! We could see them away over the stock dam, and high above our heads. We could hear them scrabbling softly before they emerged from the gable, and I could hear the tiniest, highest little vocal pitches of these amazing creatures as they wriggled out of their roost and swooped noiselessly into the evening. Judging by the number of bats we saw leave, we could have a maternity colony of fifty or more bats, including babies! We’ll have quite the project this fall making the Miner’s Cabin bat-proof. If there weren’t health risks associated with leaving bats in the attic, my vote would be to leave them. I love bats. Fascinating, beautiful little creatures.

Sarah and I watched Master and Commander this evening while I picked over chokecherries. Hopefully we’ll be making jelly on Saturday!