While on our way back from Bozeman, MT, mom, the girls, and I stopped in Lovell, WY, for two nights, and explored Bighorn Canyon National Recreation Area. Definitely a worthwhile exploration. So early on the first morning we were there, Sarah and I decided to go on a sunrise drive, stopping at a gas station for coffee while it was still dark, driving along a remote highway until we found a place to see the sunrise, watching as the sky gradually grew silver, then rosy, watching as the landscape emerged from shadows. I love how expansive the landscape is, and how desert-like. 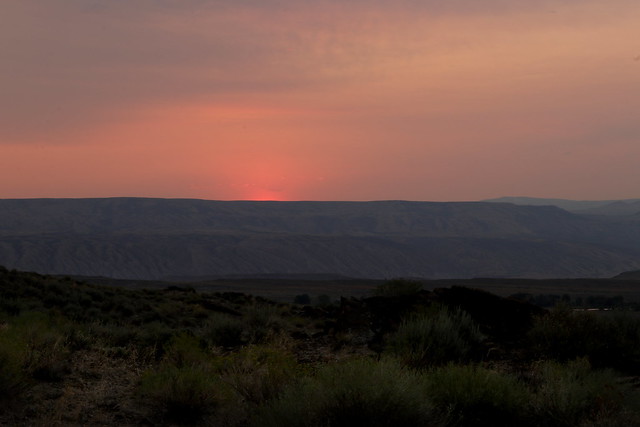 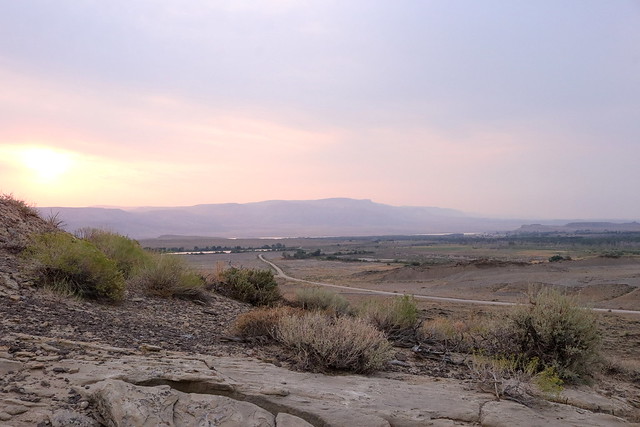 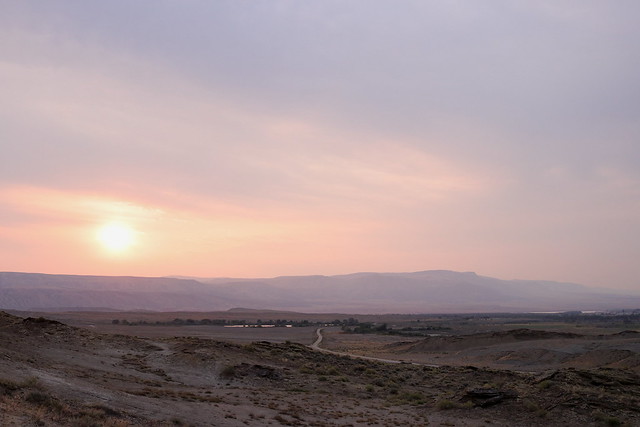 The sunrise colors were beautiful and pale, muted by the atmospheric smoke, but bringing out all the pale loveliness of the landscape, the pastel hues, pale greens and mauves and golds. Being a lover of growing things, I always delight in the differences in flora from one region to the next, and something about the low-growing, scrubby vegetation sparkles in my imagination, as unremarkable as it is. It is the landscape of the west, of the novels and history that have captured my mind for so many years…and now it is the landscape and flora of home.

The beauty of the west.

I love heading west. Even just crossing the South Dakota state line into Wyoming is thrilling.

Earlier this month, my mom, sisters, and I took a road trip to Bozeman, MT, to attend a Biblical Counseling Training Conference at a church up there, and on the way home took an extra day and a half to sight see and enjoy the beauties of our neighbor states. We stayed in a little town in Wyoming named Lovell on the edge of the Bighorn Mountains and spent a good part of Sunday exploring and reveling in the Pryor Mountains and Bighorn Canyon National Recreation Area. 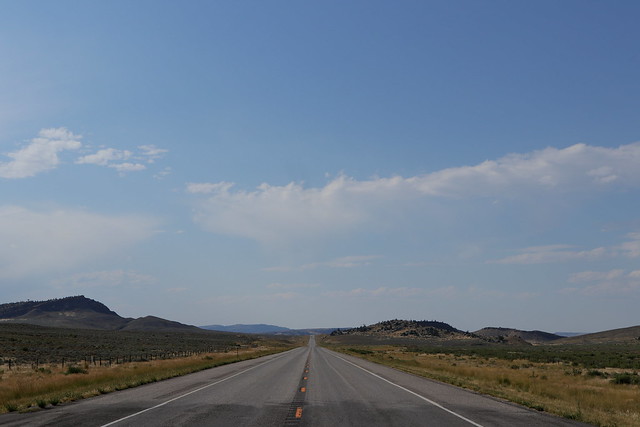 More and more, I’m drawn to the towering mountains and open skies and racing horizons of the West, amazed by their beauty, drawn to the sheer magnitude of their loveliness. I relish driving from a plains region to a mountainous region and watching the mountains, hazy in the distance, rise up out of the horizon, then grow taller, and deeper, and more, until layer upon layer disappears into the distance. I love the feeling of smallness when faced with a mountain range or canyon that seems larger than life. What a good God who has the scope of creative majesty to have thought up and placed all the beauty we see in the world around us!

I’m trying to catch up on pictures from that trip (there were many!), and I’m looking forward to sharing them! 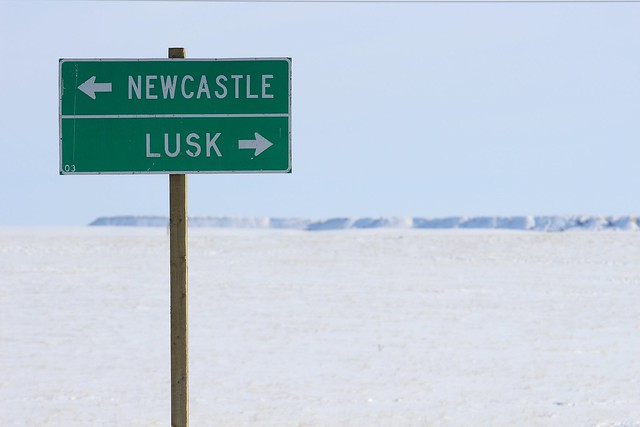 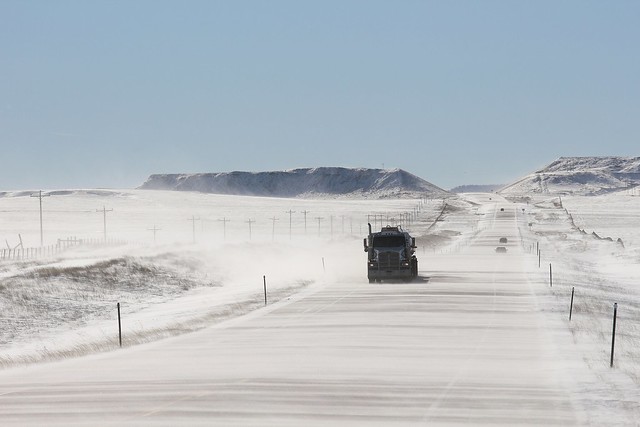 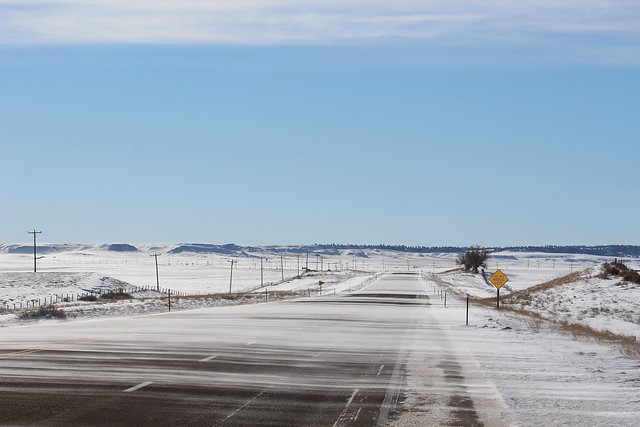 With not a mountain in sight, Lusk sits at just above 5000 feet above sea level. The beauty of the high plains. And that region is glorious. I’m a forest and mountains person, so I wouldn’t choose to live in the Lusk area over, say, the Buffalo area, but that area is beautiful, breathtaking country. Literally breathtaking, today, with the famous Wyoming wind whipping the snow into a flurry, streaming it across the highway, billowing from drifts and hilltops, working its magic upon the landscape. 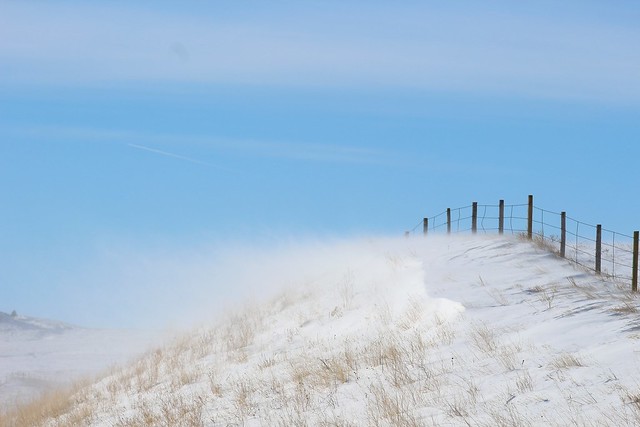 Even a day drive to Lusk and back to pick up a friend is a wonderful opportunity to marvel at God’s creative powers. I find that they are best viewed in the middle of nowhere.

Got back yesterday afternoon from a four-day trip to vaccinate calves and pregnancy check cattle. In total, we worked nearly 1000 cattle between Friday morning and yesterday evening, and we covered a lot of ground! I drove out to the permit west of Custer with Penny (Jack’s wife) on Thursday night to join the rest of the crew, and we were in the saddle by 7:30 the next morning.

It took a good couple of hours to round up the cattle, with a crew of about ten on horseback, a plane, and a Jeep, and once we had them in the corrals, sorting took another hour, and then four of us had to move about 50 yearlings to another part of the permit. Pretty sure I didn’t climb down off that horse until about 1:30 that afternoon. I haven’t ridden much at all lately, so I rediscovered some muscle groups I’d forgotten that I had…

Everything went quicker than expected Friday, so Saturday was a pretty easy day, packing up camp and heading to Wyoming, where Jack leases from a rancher over there. The heifer group (cows with heifer calves) were all out in Wyoming, 226 pair, and to get things going for Sunday, we brought in the herd Saturday afternoon. It was hot, dry, dusty, and we were ready to be done when we finished, let me tell you. It was a little stormy on the horizon, and we could see smoke from a couple of fires in the distance, from lightning strikes we assumed. But the cattle came in without incident, sorted nicely the next morning, and we were able to finish up another small group of cattle yesterday in the early afternoon. A good weekend’s work.

Working with ranchers and cowboys, I appreciate the gentleness with which they treat God’s creatures. We may just be getting steers ready for the meat market, or getting heifers ready to be bred, or preg checking a bunch of cows, but there is a gentleness and respect for the animals, and a desire to cause them the least trauma or discomfort. Rounding them up, running them through a chute, sticking them with needles, all that causes some level of stress to the animals, but the job is done quickly and efficiently. There is visible distress in the voices and on the faces of the crew when there is an animal suffering–A calf died at the permit, a “respiratory calf” that had a form of pneumonia, and the sober attitude had nothing to do with money lost on the calf, but everything to do with the little creature’s suffering. It is refreshing to see such gentleness towards God’s creatures–That gentleness is, I think, a sign of real strength.

The visit to Wyoming was eye-opening. I’d never been to Wyoming before, and it is some beautiful, desolate country. Green this year, but just so big–So much of it! And so open. The things that seemed to thrive were sunflowers, rattlesnakes, horned toads, and rabbits–Lots and lots of rabbits.

Being on horseback isn’t conducive to taking pictures, but I managed to sneak just a few. I missed one really fantastic photo opportunity, with the sun coming up over the corrals, and the dust rising like mist around the cattle, sifting through the fences, and partially obscuring the cowboys sorting the herd. It was really beautiful. But the dust was really awful.

I leave tomorrow morning around 5:30 to head to Nebraska for more vaccinating and preg checking, and I’ll get back on Thursday evening. Good to be back in the saddle, even if only for a week and a half.