Wow, already this has been a great year for hiking. I’m pretty excited to see where all we end up exploring this year! 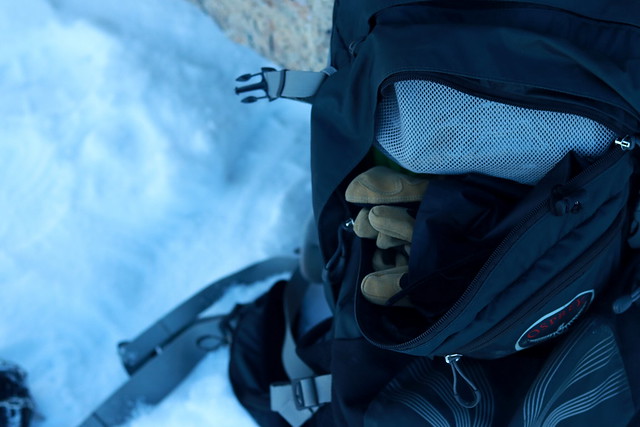 On January 5, we took a trip up to Sylvan Lake to hike one of the Black Hills’ legendary hikes, Sunday Gulch. Apparently this trail is closed in the winter. Oh, well. We weren’t the first to shrug our way around the gate… 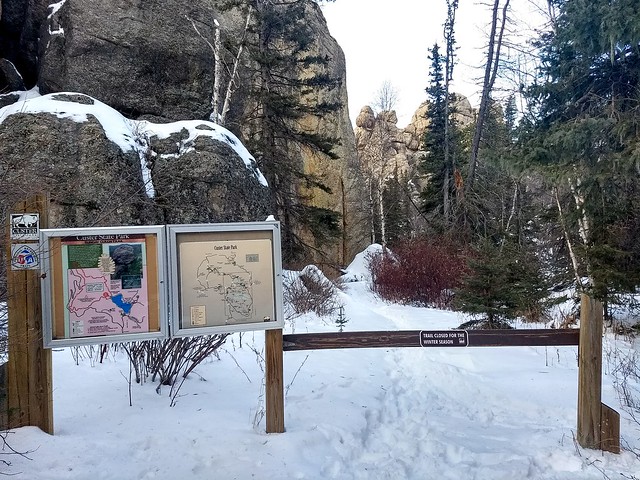 This hike was gorgeous when we did it in the late summer. It was even more amazing drifted over in snow! The higher elevations of the Hills, including around Sylvan Lake, get more snow and less of it melts off, so it piles up pretty fast. In places, drifts were well above the knee! 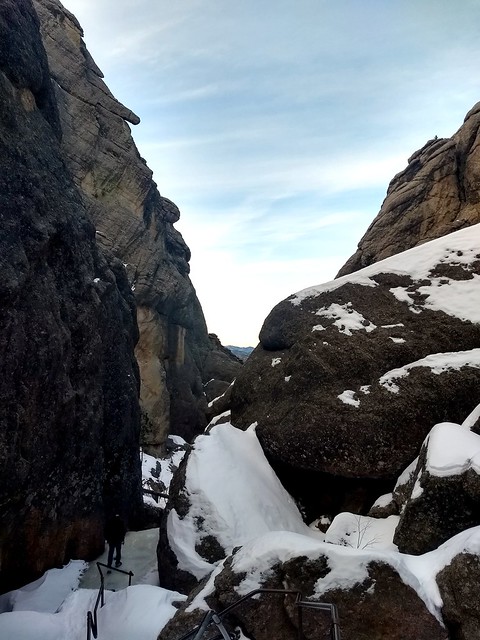 Cleats were a must for this hike. We only went down the creekbed to the gulch and came back the same way, rather than doing the whole loop. The downward part was the most fun. The trail winds its way through a steep boulder field and is marked by a pair of parallel metal handrails, making descent exceptionally easy. Simply place a hand on each rail and jump, if your gloves are slick enough. You sail down sections quite effortlessly, and I’m sure we looked ridiculous. 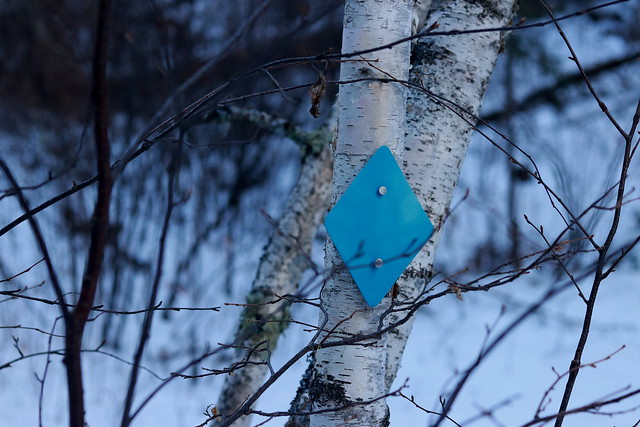 The gulch itself was enchanting, with the creek frozen and still flowing beneath the ice, and snow mounded up in soft contours out of the way of wind. It was beautiful. It looked so different with the snow cover, and the late afternoon light was gentle and cold. 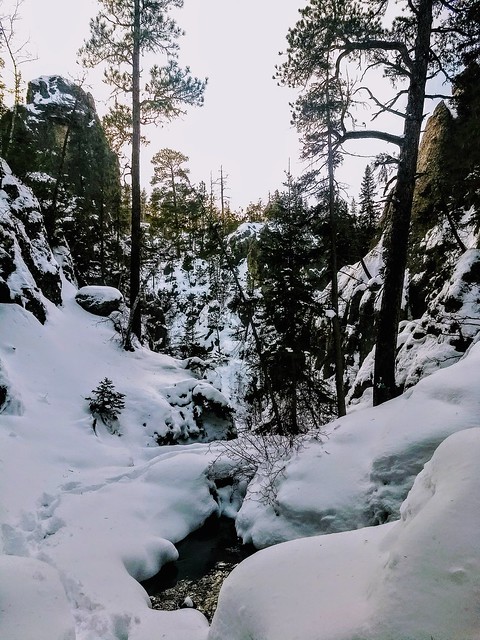 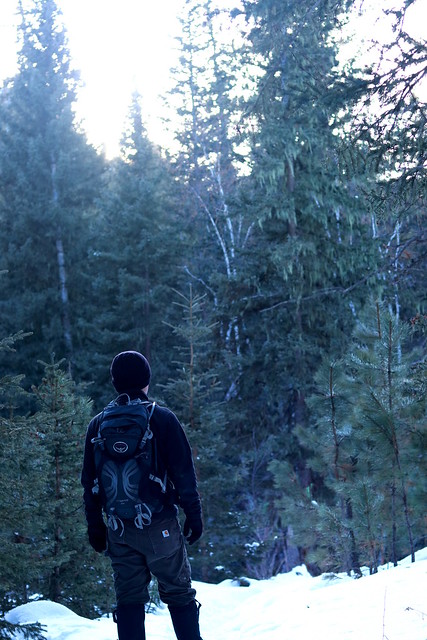 Nothing like some brisk, strenuous hiking on a chilly January day!

The Needles Highway, one of the famous scenic routes in the Black Hills, takes on a new character in its winter isolation. The gates close late in the fall, not to open again until spring, but a handful of hikers, skiers, and snowshoers take to the highway to enjoy the beauty of the spires and sprawling landscape. Sarah and I decided to add ourselves to that number and hike the Needles Highway, gate to gate. 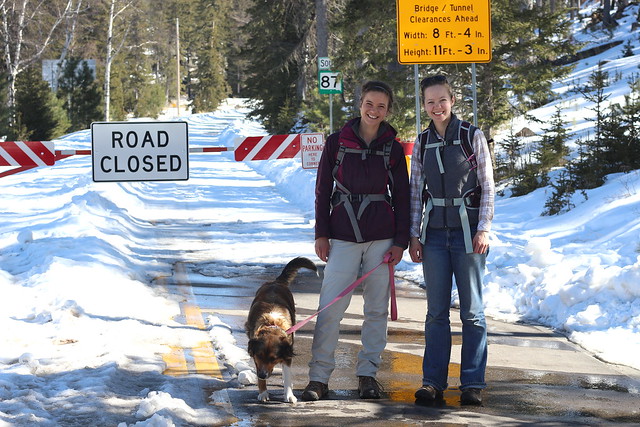 We set off after church. Our mom dropped us off at Sylvan Lake, and we would then hike to our truck, which our loving family left for us at the other end of the highway on their way home. 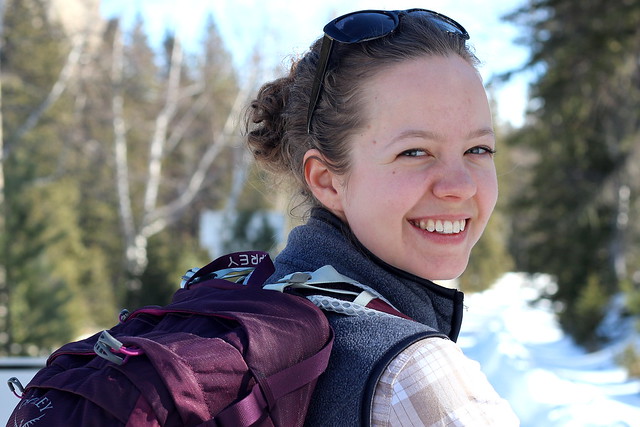 We were set. We had plenty of water, food, an extra layer, and a whole bunch of enthusiasm. I was only too excited to get to try out my brand new Osprey Sirrus 24 backpack, which I had bought with Christmas money from my Uncle Jim. An 8 mile hike in springlike weather would be heavenly. And it sure was, to start with. The blue sky was overwhelming, the sunlight was almost too warm and the trail was a gradual uphill climb to the Needles Eye lookout and tunnel. Stunning. Pristine. We chatted and laughed and walked quickly, making pretty good time, stopping occasionally for pictures and enjoying the views. 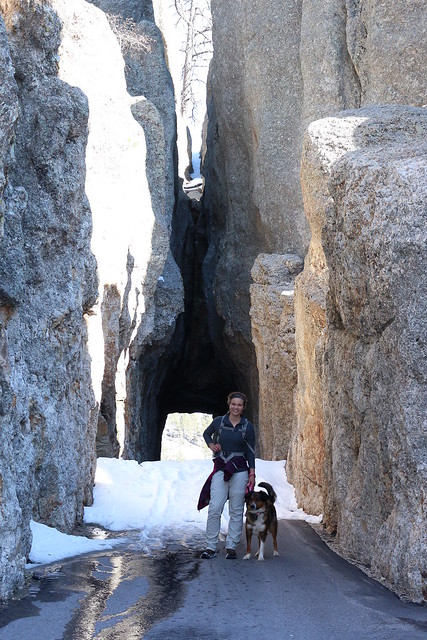 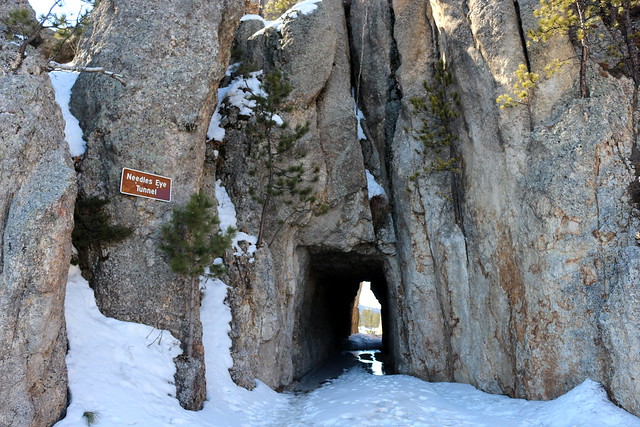 Then we got past the Needles Eye. For about another mile, things went swimmingly. But we had made a handful of miscalculations and we were starting to realize it. 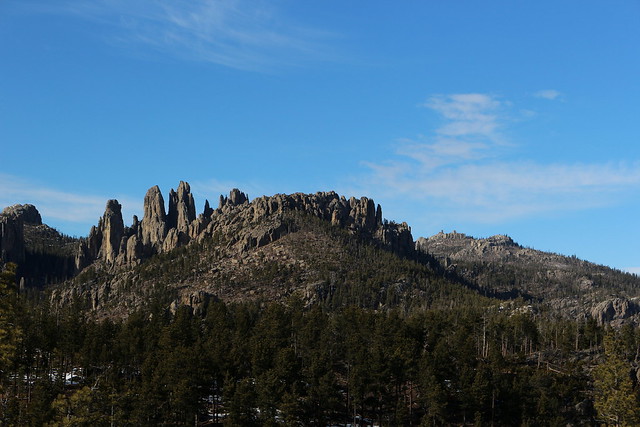 First (Call us ignorant. Or naive. Either works.), since we hadn’t had any snow in two weeks, we made the mistake of assuming that there wouldn’t be “that much” snow on the highway. I mean, look at this pictures of the spires! It sure doesn’t look like there’d be “that much.” Well, there was. However much we imagined “that much” to be, there was that, and more.  Starting about a mile past the Needles Eye, the real snow began. At times, we hiked in just a few inches, but other times we stumbled into almost knee-high drifts that continued on for way too long. Eight miles had seemed easy. But 8 miles in heavy and sometimes deep snow? Talk about a workout. By mile 2 or so, our tracks were the only tracks on the highway (all the smart people had turned around), except for a very faint, lonely set of ski tracks. Another fresher set of ski tracks showed up around mile 5.5 and we accompanied those the rest of the way out. 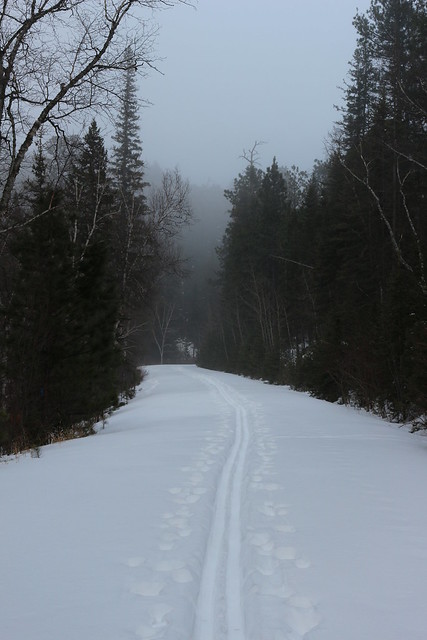 Second, we had assumed a hiking time based on little snow. Let’s just say it is a good thing we headed out on the trail when we did, and didn’t dawdle at church any longer.

Third, we assumed weather based on Custer’s weather. But the problem is, when your hike takes you over a mountain range to the other side of said mountains, even modest mountains like the Black Hills, even a relatively short hike, weather patterns change. Not because the weather actually changed, but because you leave one hemisphere and enter another hemisphere. At about mile 5.5, we left all the beautiful sun and blue sky behind us on the other side of the Hills and entered into a damp, dark, cheerless fog bank. It was great fun.

By mile 6, our boots had soaked through, the sun was gone behind the hills, the fog was eerily clinging to the trees, our protein bars were frozen, my hip was aching, we were constantly in snow up over the top of our hiking boots, and our hiking time was suffering. Sunset and our exit time were starting to overlap in our minds to an uncomfortable degree. We had lights, but still…Then we started to see very large mountain lion tracks. Our hiking time magically improved. Amazing. Although I’m by no means a mountain lion expert, I’ve seen mountain lion tracks on a number of occasions, and these absolutely dwarfed the others I’ve seen. The spread of that cat’s toes was impressive. Since we were getting a little jumpy in the fog and the failing sunlight, we failed to get a comparison shot, with our hand or something next to the paw print for reference. So for all you know, our brains blew up the size of the print in our minds and what you’re looking at is really a little old bobcat print, or even a wandering house cat. Meow. 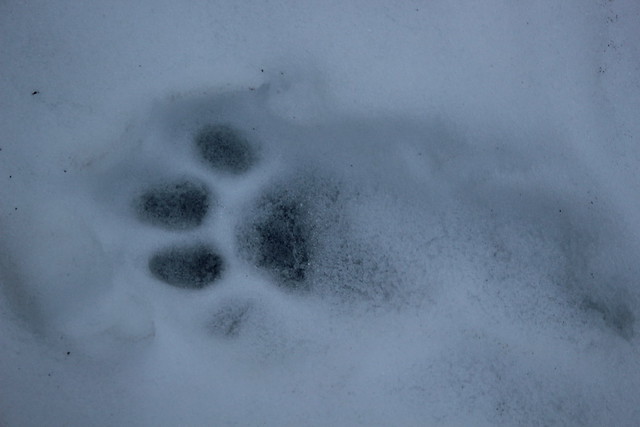 In summary – A lot of things could have gone wrong in those 8 miles, but they didn’t. In spite of some lack of planning, the hike was fantastic, the views were beautiful, and the memory is a fun one. The Sirrus backpack was fantastic – I never even felt it on my shoulders. Snowshoes would have been nice. Winterized hiking boots would have been nice as well. Wool socks are amazing. My socks were damp probably by mile 2.5 (to the point of leaving wet prints on the occasional patches of dry asphalt when I stopped to shake snow out of my boots), but my feet felt dry until about mile 5 or 6. But even then my feet never actually felt cold. Sloshy, yes. Cold, no. The sight of our truck at the end of the highway was a welcome sight, I have to say. 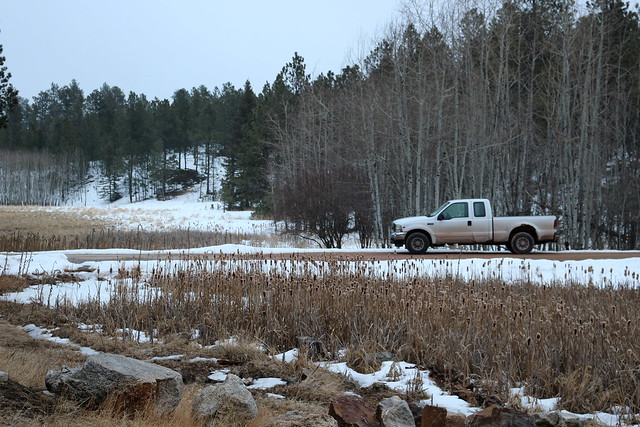 What a hike. A great start to the hiking season! 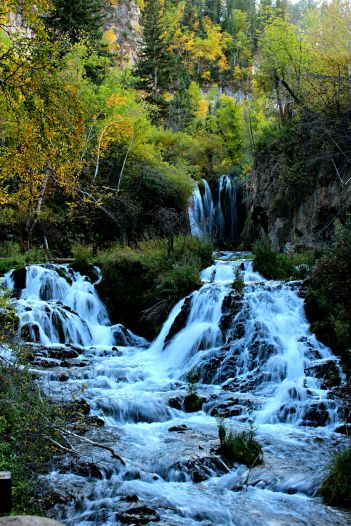