So if you want an actual hiking review on Mount Baldy, check out this article from earlier this year, when we actually made it to the top. This hike was a little different. It just is, when you’re driving up to the trailhead and there is ice on the trees and a miserable “winter mix” is actively falling. It became much more snow-like the higher in elevation I drove, and when I arrived at the trailhead, there was no mix about it. It was snow. Which is so much better than “winter mix” for hiking in, by the way. It was colder than I had expected, but both of us were very well prepared with rain resistant gear and plenty of warm layers. 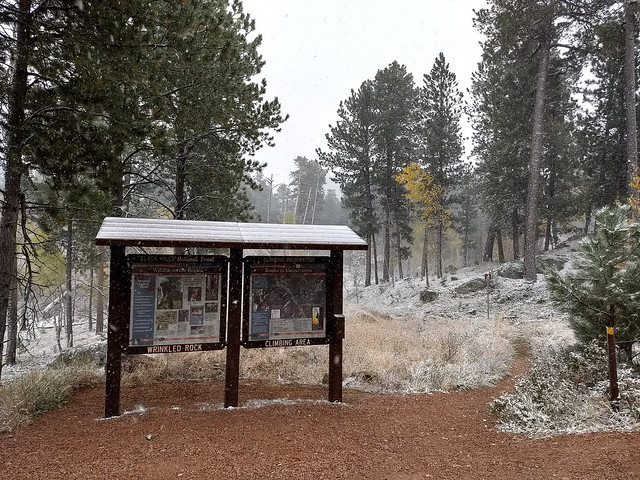 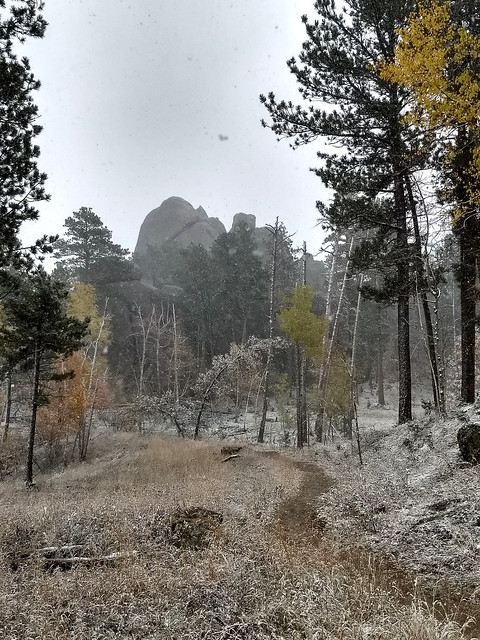 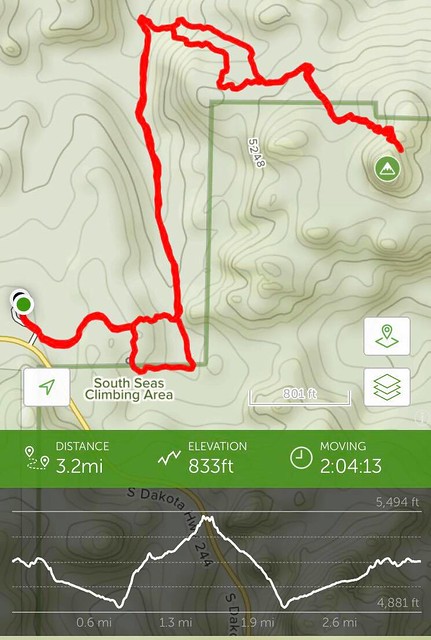 Out we went, into a world of gentle snowfall. The snow creates a profound and expectant silence, as little sounds are muffled and you become more aware of the sound of your own footfalls or your sleeve brushing against brittle tree leaves. 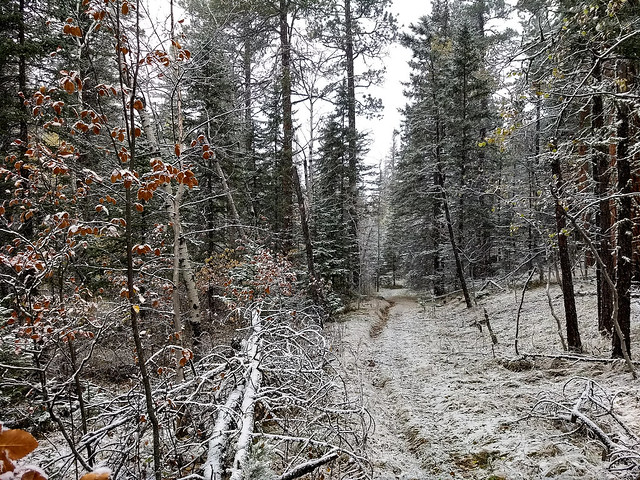 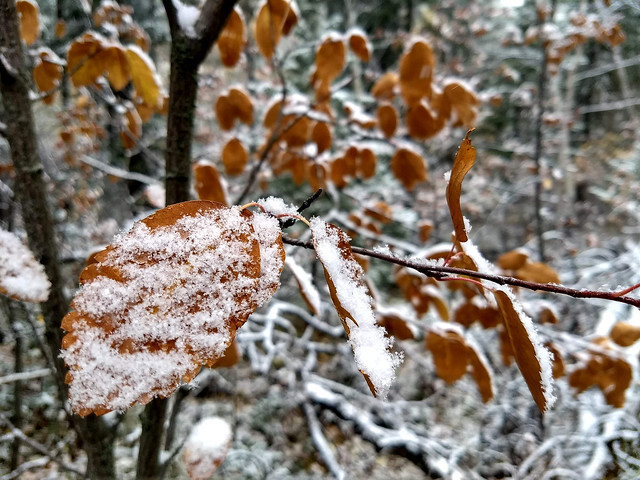 And it was beautiful. I mean, absolutely gorgeous. The snow was enchanting, and the little bit of autumn still clinging to the aspens and birches shone out from under the layer of snow. Fallen leaves were covered thickly with shimmering water droplets, not cold enough yet to freeze. 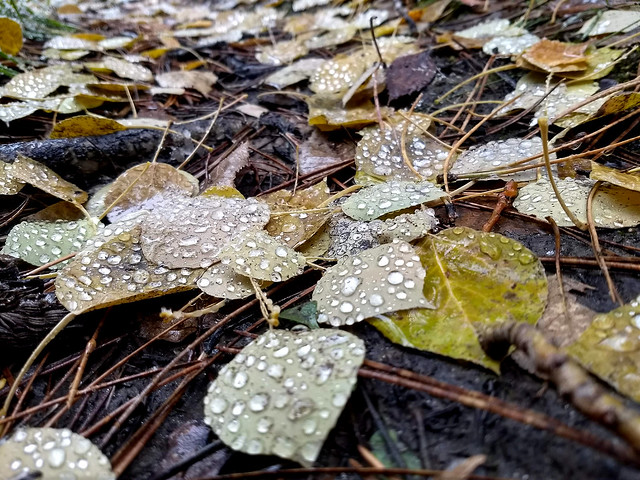 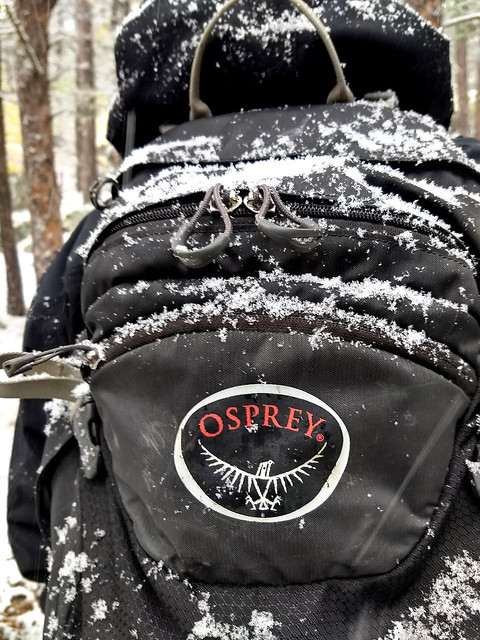 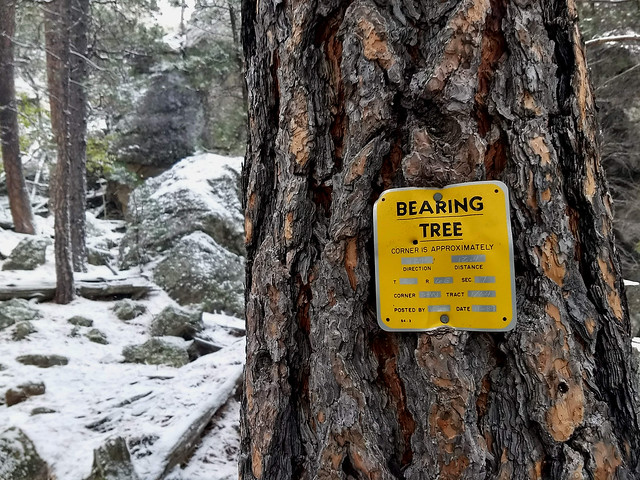 We lost the trail for a bit when we headed up the mountain, but Baldy is an easy hike as long as you keep looking up. If you can still go higher, you’re not there yet. We rambled and wandered, both pretty familiar with the area, picking our way through deadfall and patches of juniper and old burned trees and massive boulders, eventually emerging at the base of the boulder field which begins the true ascent up Mount Baldy. In the summer time, the ascent is a challenge but very doable. But not so on this hike. Icicles sparkling on the edges of higher boulders suggested some inclement conditions, and we cautiously worked our way higher, the thrill of a challenge before us. 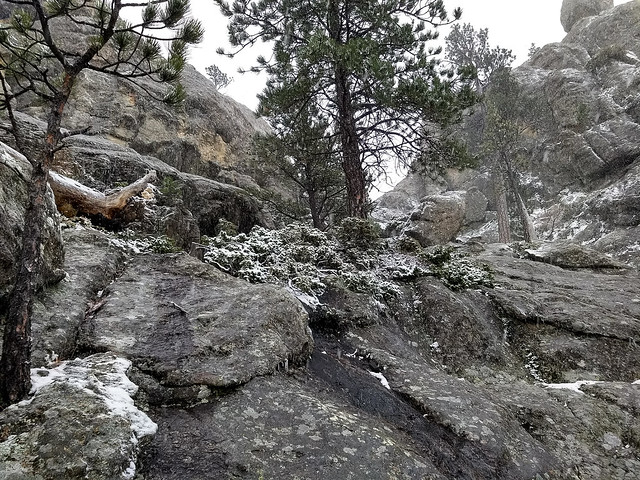 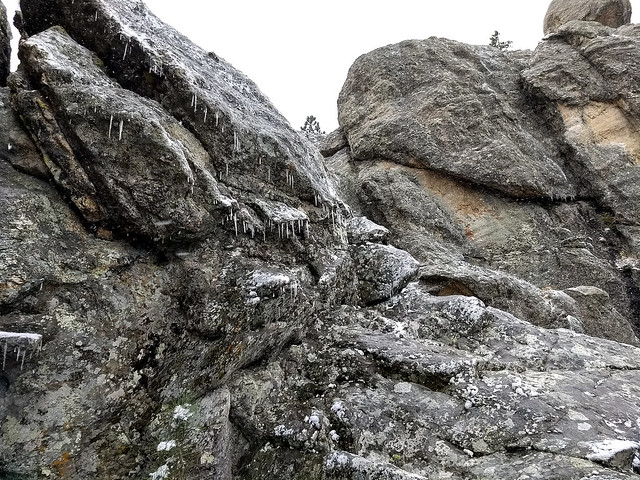 And it was a blast. Definitely an adrenaline rush, but we were extremely careful and moved slowly, making sure of good footing and good handholds. We finally arrived at a point where we knew we could probably make it up higher, but would definitely have a hard time getting back down. Both of us are first responders, and the prospect of getting ourselves into a situation and having to call people we know and the subsequent embarrassment is a good deterrent for stupidity. Probably a good thing. 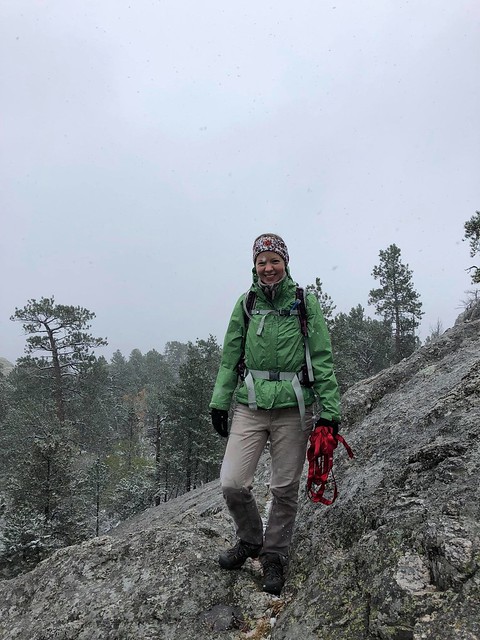 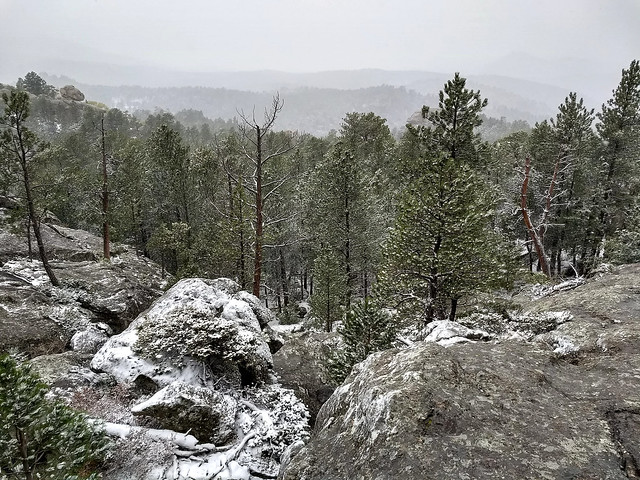 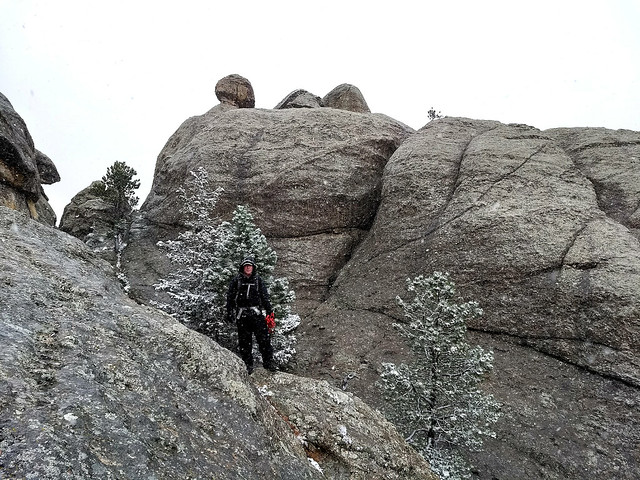 We headed back down, glad to get off the boulders and back onto somewhat more stable footing. If you can call snow-covered pine needles on a slope stable footing. The scenery was getting prettier by the minute, and the trail was dramatically changed from when we had hiked up. Tangled places were now a tangle of white, and the trail mud was covered over. It was a winter wonderland. I could feel ice on my eyelashes, but the rest of me was toasty warm, except for where my pants were wet from sliding and crawling on wet rocks. Mount Baldy really is a great cold-weather hike, since it is strenuous enough you warm right up! 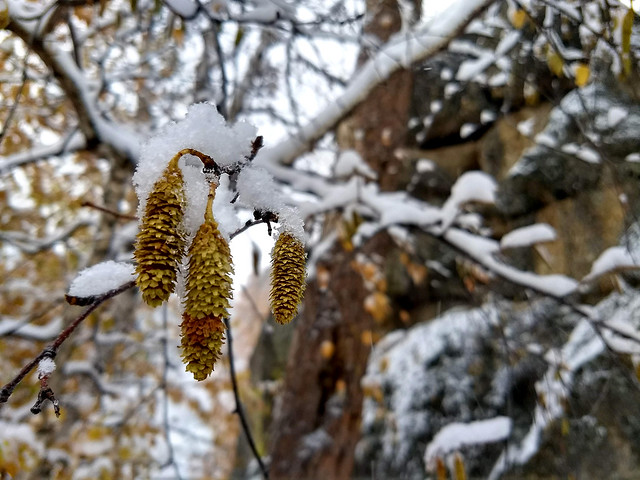 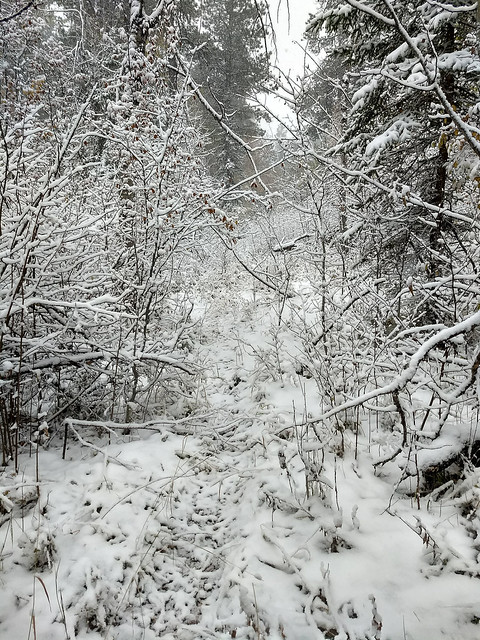 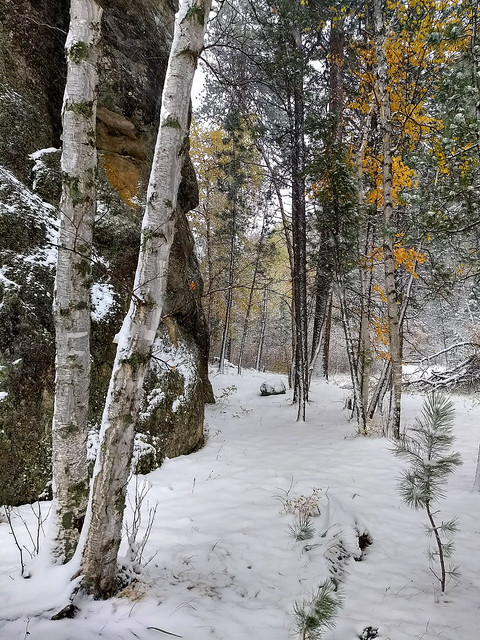 What we didn’t realize as we hiked back down is that while we were hiking, a surprise winter weather advisory was issued and warnings were going out all over the place. There we were up in the snow and ice, happy as larks, somehow not really thinking of the fact that the snow actually was accumulating a little and falling a little harder. But it just wasn’t very much. Our mistake. (In our defense, everyone in the area was surprised.) Here’s a view from the parking lot on our return, where Baldy should have been easily visible somewhere behind those trees and falling snow! 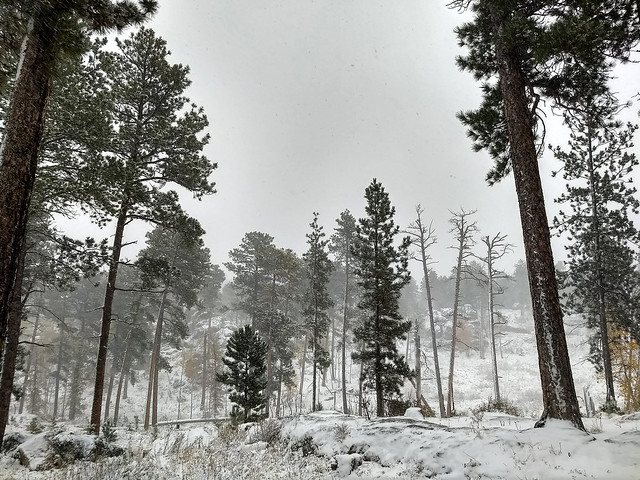 And our day wasn’t over. When we arrived back at our vehicles and I went to start my (actually, my sister’s) truck, there wasn’t even a click. The engine was dead. Axel had jumper cables so we successfully jumped the truck. Hooray! But our trouble was only just starting. See, the entire time we were hiking, the snow wasn’t just laying down snow. It was laying down a treacherous layer of ice. After managing to get out of the parking lot with a lot of slipping and sliding and several attempts due to rear wheel drive, I fishtailed 100 yards down the desolate highway, looking in the rear view mirror just in time to miss seeing Axel’s car slide right off the highway into a ditch. With the amount of fishtailing I was doing at only 5-10 miles per hour and the road a steady incline for the next mile or two, I knew there was no way the truck was making it out (I really dislike 2-wheel-drive vehicles), and Axel’s car was stuck hard. Fortunately, a nice DOT guy drove past and we managed to hitchhike with him down to the fire station in Keystone. (That makes that the second time I’ve shown up at the Keystone fire station because of a vehicle-related issue. The last time was because I locked my keys and my phone in my truck at the gas station on the other side of town on my way to work. So I ran across town, borrowed a truck and went home for spare keys.) The rest of the saga doesn’t bear repeating, but let’s just say we had a jolly night driving back and forth on worsening roads with Sarah and her friend Luke (who had to rescue us again, the first time because I locked my keys in Axel’s car on the other end of French Creek Natural Area. There’s a scary pattern in all this.) to get Axel’s car towed out, and towed another person on the way home at the foot of Hayward Hill, which is something of a local legend and landmark. We topped off the night with hot chocolate and popcorn back at my Grandma’s house. 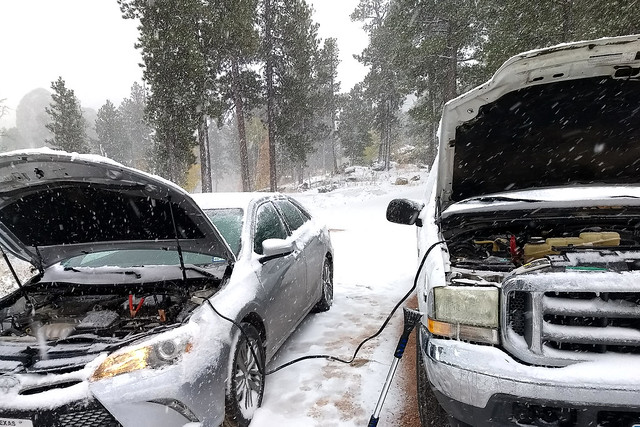 Yet another in the series of Hiking Misadventures.