Finally! Fruit processing season has been here for a few weeks now, and I am thrilled to report a few new recipes that have been added to my recipe collection. This recipe for crabapple syrup is adapted from one I found on the Backyard Forager website – here is the original article and recipe. I have my own method of juice extraction, but I needed the sugar-to-juice ratio and the cooking and processing time. It is a wonderfully tangy syrup, and I look forward to using it on or in a number of things – yogurt, pancakes, icecream or sorbet, lemonade or iced tea…The list could be endless. 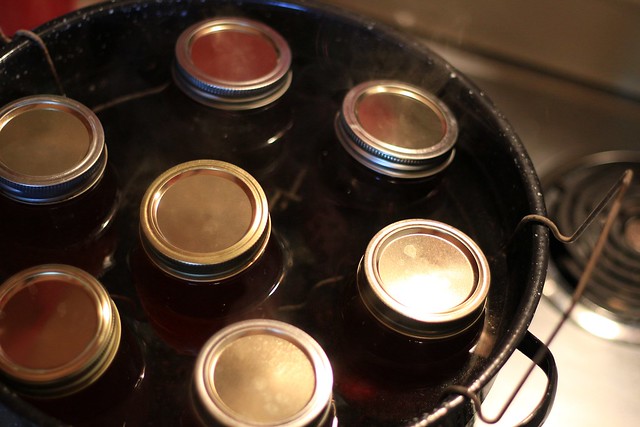 Method – Combine all ingredients in a large pot. Heat the mixture to boiling and simmer for 5 minutes, stirring constantly. Remove from heat and allow to cool slightly. Skim foam off the top and save the skimmings for a taster. Pour syrup into sterile jars. Clean rims and threads, and seal with two-piece canning lids. Processes for 1o minutes in a boiling water bath, or adjust for altitude. I processed the jars for 15 minutes, since we are at ~3600 feet above sea level. Yields about 7 pint jars. 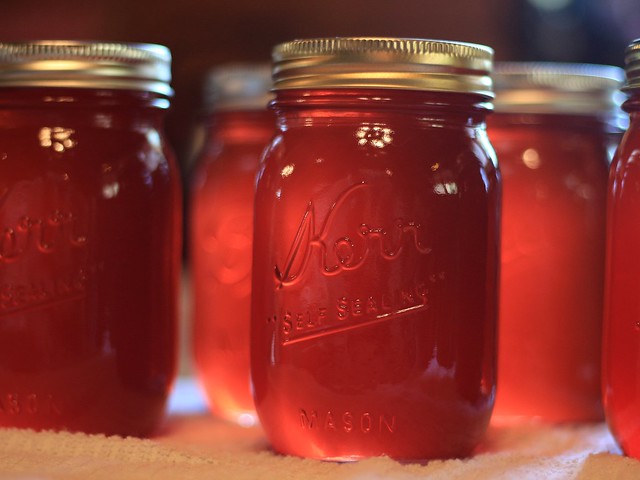 Notes – I added the pectin in the hopes of thickening the syrup a little. The original recipe doesn’t include any pectin. The chokecherry syrup I made last year was very runny, even though it included pectin, and I liked the consistency even though other family members didn’t. Crabapples have a fair amount of natural pectin, so I was hesitant to add too much pectin and end up with jelly rather than syrup! However, the 1.5 tablespoons didn’t really do anything. After thinking about it, I realized it was kind of a joke that I even thought that little pectin would do anything at all to that quantity of juice and sugar, but math and ratios (yes, simple math, I know) are not my strong suit. They aren’t even my weak suit. They just aren’t. Period. I also added a splash of lemon juice, and could have added more (go back to math not being my strong suit). As far as the headspace, I left about a half inch of headspace, which might be a little much, but I don’t think it will matter. I probably could have gone with 1/4 inch.

There is something exceedingly satisfactory about the process of home canning. I’m so glad it is that time of year!