When Jenny and I headed out on the fourwheeler at 9pm last night, we had kind of expected a more leisurely spin. I’d never done any fourwheeling, so anything would have been fun for me! The trails we intended to ride on were reported to be in good condition and to have been recently repaired, to some extent. A fifteen minute drive got us to the old Glen Highway, and another ten minutes got us out into the real off-roading. 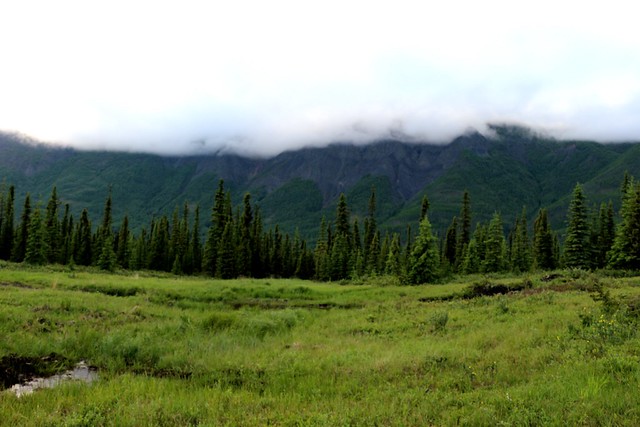 The area was beautiful. The landscape, a boggy tangle of spongy moss and lichen and slender spruce, sprawled to the mountains, the tops of which were buried in clouds. The trail became more mountainous as we climbed towards the pass, crossing a few streams, taking alternate routes around the largest puddles, some of which were deceptively deep – we found out the hard way. On a number of occasions, we almost ended up stuck, which at a minimum would have been very embarrassing. A couple of the bad spots almost made us turn around, but then the road would get better so we’d keep on trucking! It was a gorgeous evening. Why turn around? 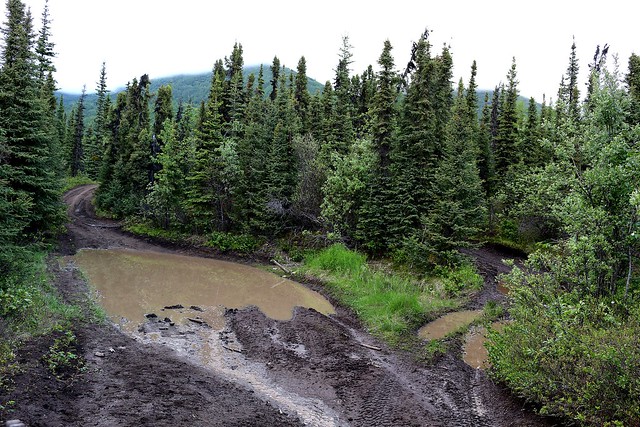 We were never quite deterred until we got to a particularly steep spot requiring some tricky maneuvering. I hopped off to make the maneuvering easier for Jenny, and as I did, I got a whiff of that unmistakable smell of something big definitely dead. I mean, it wasn’t just a dead rabbit close by. “Jenny, do you smell that?” I asked uneasily, as the stench got stronger, at the time that she was processing the same thing. We both had the “Let’s turn around now” feeling, and did so as quickly as she could get the fourwheeler turned around on the muddy slope. We had a tense couple of minutes there on the slick, steep, rutted slope, with pretty thick brush and uneven terrain on either side of us, and poor visibility as a result. The turn around was challenging enough, but if we’d gone on any further, Jenny said we wouldn’t have been able to turn around until we reached the top of the trail. With a persistent creepy feeling, we headed back down the trail. That stench sticks with you, particularly when there’s a good chance the stench was from a grizzly cache. We would have felt at least a little better if we had brought a bigger gun.

I wasn’t quite able to shake the creepy feeling until we got back home at 11pm and warmed up with some hot tea. Nothing like that to get your heart pumping!