The hike today to the well-kept secret of the Community Caves in Spearfish Canyon just took its place as the most exciting hike I’ve ever done. Sarah, Jake and I were discussing this on our way back down, and “foolhardy” was the choice word we selected for this hike. In all fairness, none of us had tried this hike before so we didn’t have a perspective on what it would be like in the winter and (just to be sure, I googled Community Caves while writing this review) other hiking reviews don’t say much about winter conditions, other than that it is beautiful and crampons are recommended. So this hiking review comes with some serious conditions applied to it. Please read to the end. 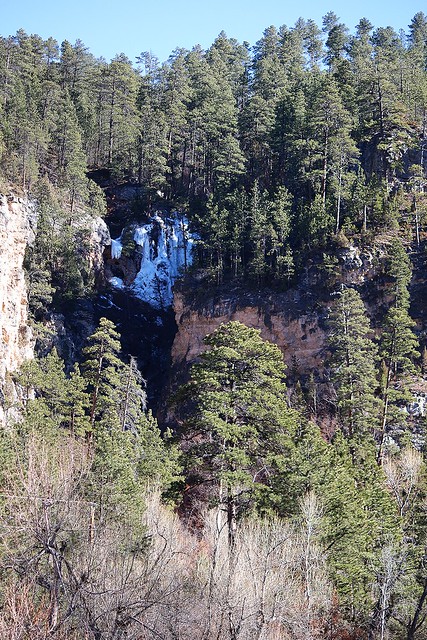 The Community Caves are located off the Spearfish Canyon Scenic Byway, 2.7 miles south of Spearfish. In the winter, the ice formations can be seen from the road and look deceptively small. Parking is at a pullout just after mile marker 13. The trailhead is across the road from the pullout and crosses Spearfish Creek. 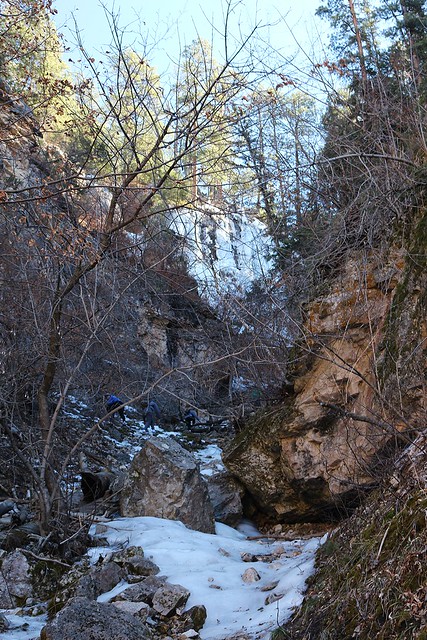 The hike is short, no more than a half mile from the trailhead to the caves, but if anyone tells you it is an easy hike, they are pulling your leg or haven’t ever hiked it before. Granted, it would be a lot easier in the summer without a sheet of ice for a trail, but this still is a strenuous, though short, hike in. The brunt of the trail is up what appeared to be a gravel and boulder slide, a very steep creekbed, and the last 20 feet or so is even steeper and muddy. It isn’t a hike. It is a scramble. Even in the summer, this would not be recommended for children. Some reviews suggest hesitantly that it might not be good for children, but unless you have hiked it already and know your kids can handle it, do not try it. Or be prepared to turn around. I also wouldn’t recommend you try taking a dog on this hike, for that matter. 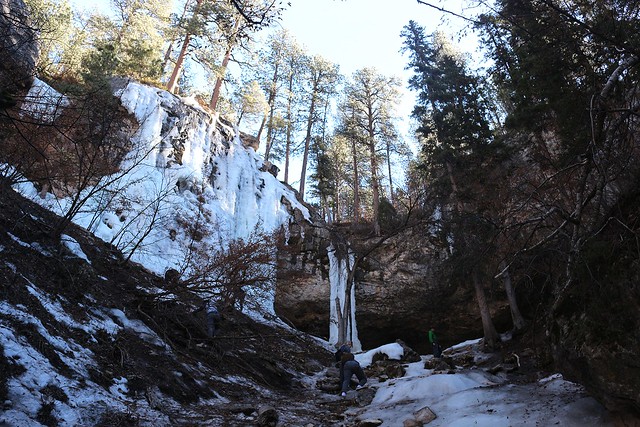 Perhaps the sheet of ice for a trail should have deterred us, but one doesn’t drive 2 hours to get to a trailhead only to turn back because of ice. I mean, its winter – What do you expect? The trail got steeper and slicker, but the ice formations loomed above us and there were other climbers ahead of us, so it couldn’t be too bad, right? 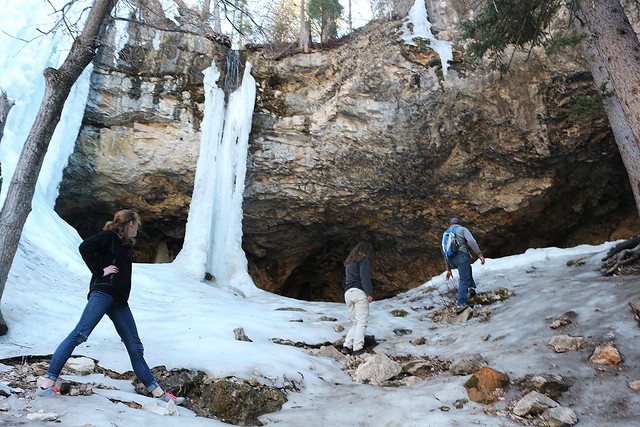 Fortunately, the little tops of rocks sticking above the ice actually made decent footholds, but one wrong step and it would have been a bumpy slide to the bottom…So we plowed on ahead and made it to within 20 feet of the top before we were stopped by the ice. The patch where Jake is standing in the above picture is the furthest we could get going straight up. Jake’s handy rope got us across the icy stretch and we scrambled up the muddy slope into the shadow of the Cave chamber. It was incredible. 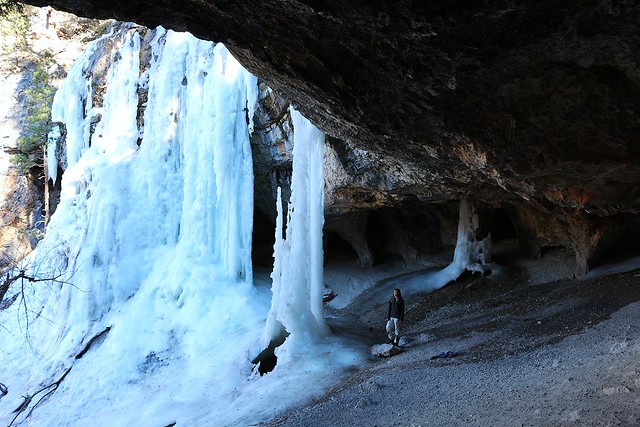 I had heard that it was beautiful, but pictures don’t do it justice. That much ice really does appear blue in the shadows! Pigeons chortled to themselves in the recesses of the cave, and ice pillars fed by trickles of water grew on the back wall of the cave. There were remnants of a campfire. A massive wall of ice enclosed one end of the cave, forming a dim, blue chamber. It really was stunning. 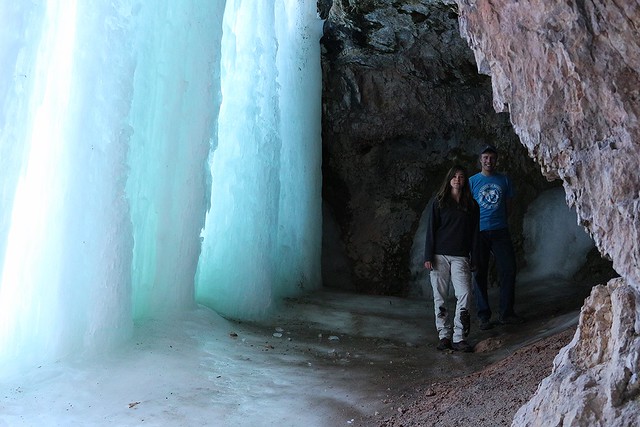 Although the entire hike is slick, the main danger issue isn’t the ice on the ground – That just requires caution, careful footing, and being very deliberate about where you put your feet. The main issue was the ice up in the air, supposedly attached to the canyon wall. The hike back down went pretty well until we heard a giant crack and basketball-sized clumps of ice came flying right at us. There was a whole ravine of area that the clumps could have flown at, but of course they flew right at our three selves, and we were in enough of a precarious position that we couldn’t duck or move. I took one on the leg and another square between my shoulder blades, and Sarah spent the next five minutes fishing a clump of mud out of her eye. Miraculously, no one was hurt! We quit dawdling (if we even had been at that point) and got down as quickly as we safely (?) could.

1) Do not hike this after a period of thaw. While this seems rather obvious in hindsight, it wasn’t so obvious going in, but melting giant pillars of ice  become crashing boulders of ice when the temperatures rise. Who would’a thought…

2) Take some rope. Jake actually left his rope tied to a tree, and there was already another one there, so we were able to get back down the worst part. But do yourself a favor and take some rope anyway, just in case.

3) Take gloves, even if the weather is nice (but refer back to #1. If it is nice enough to go without gloves in the winter, it is too nice to do the hike anyway). Gloves, because of #2.

4) Seriously, wear good shoes. There were some other young people up there today in completely inappropriate footwear. Even in the summer, wear good hiking boots. In the winter, take crampons or YakTrax or something. We didn’t.

5) Don’t hike alone. Although generally not recommended to hike solo, for this it really would be foolish to hike it alone. 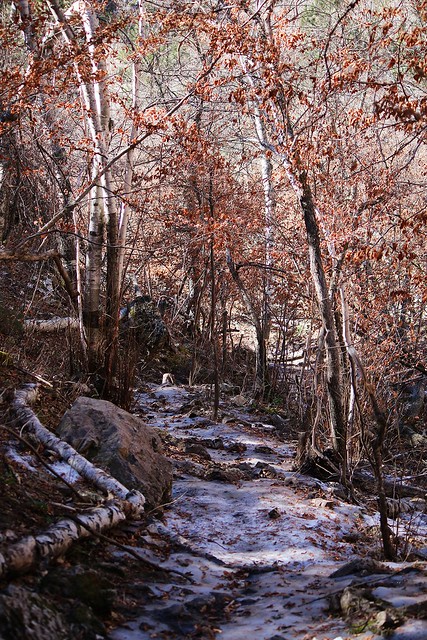 In spite of the foolhardy nature of this hike, we made it out alive and have great pictures to show for it. Coming down was (surprisingly) the easy part, given how slick it was. We all were picturing sliding the whole way on our rear ends. We made it down without incident and very relieved. No broken bones or heads. It is worth the scramble to see it. Just please don’t do it after a thaw.

One thought on “Hiking | Community Caves”