As soon as I heard that there were wild horses up at Theodore Roosevelt National Park in North Dakota, I knew I wanted to make a trip up there. It turned out that we could make the trip while our sister Jess was here visiting for a week from Illinois, so we dug out our camping equipment, made hasty plans, and piled everything into the pickup, ready to camp in the South Unit of the Park. 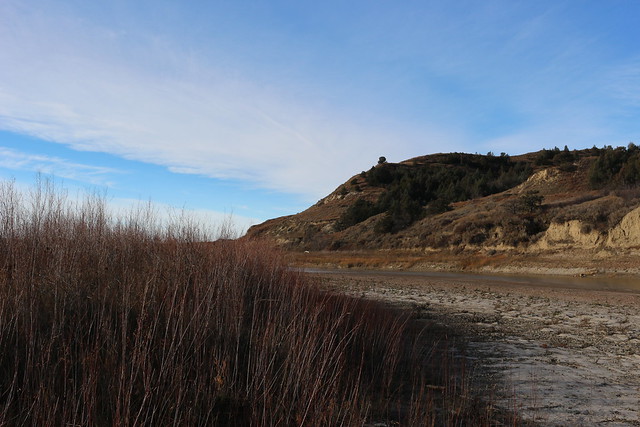 Half of the pickup bed was filled with bedding, since it was supposed to be in the 30s the night we were up there. It took about five hours to make the drive, due to high winds, and we arrived after dark at the Cottonwood campsite. We set our tent up by the light of the truck headlights, since we failed to bring a working lantern with us; we splinted a broken tent pole with an extra tent stake and duct tape, since we’d managed to let the tent blow down the night before when we were “airing it out.” Of course, it started to sprinkle, which is par for the course on an Adrian camping trip, and we made a tiny fire in the campsite grill, enough to heat up some soup. We finally piled into the tent, and huddled in our blankets to play cards, listening to the wind and rain picking up and wondering if the tent would blow over again. 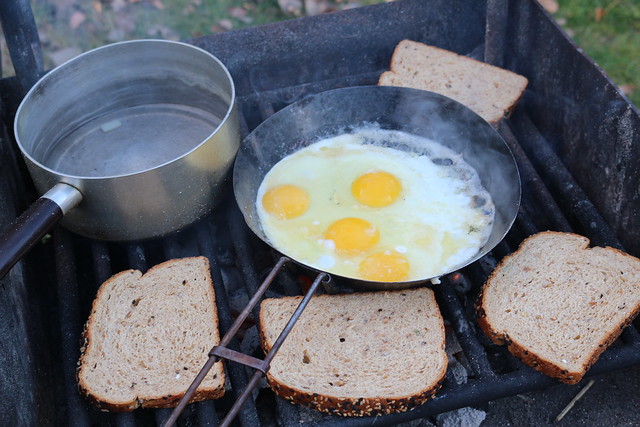 It didn’t. After a chilly night, we rolled out of our blankets the next morning, ready to tackle the day. Jess and Sarah whipped up some breakfast while Anna and I packed up our tent, and we all headed out to see the sights of the Park. 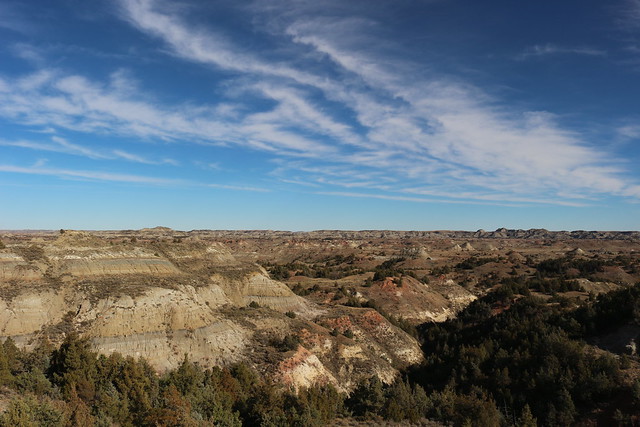 The 70,000 acres of Theodore Roosevelt National Park are home to abundant wildlife, including feral horses, buffalo, antelope, and deer, with the Little Missouri River crisscrossing the badlands. Theodore Roosevelt lived out there in the 1880s, and the breathtaking beauty makes one wonder why he ever left. Unlike the South Dakota badlands, which are bare and treeless, the North Dakota badlands are thickly covered with juniper trees and scrub juniper and other coarse foliage. The November landscape was muted, but still colorful with the hues of the autumn grasslands and the brilliant sky. The views were spectacular! We drove the 36-mile scenic loop, stopping at just about every pullout and walking where we could. We wanted to hike, but we had Jess’s dog with us, and dogs aren’t allowed on trails in the park. So be forewarned. 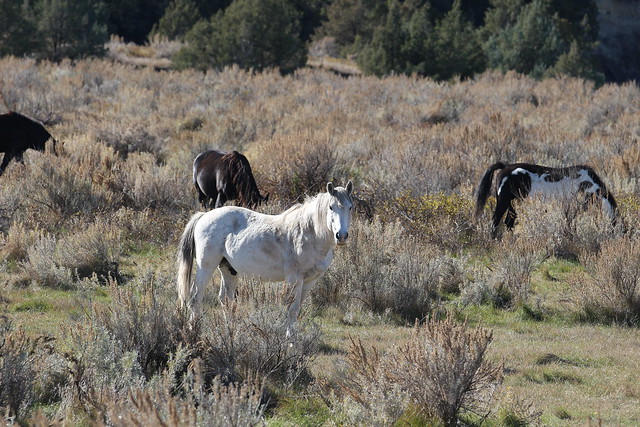 After probably 10 miles of seeing no wildlife, we started to wonder if we’d leave without ever seeing the horses, but we came around a bend in the road and in a sprawling valley, still faintly green, there were five or six beauties grazing quietly. We only saw one other small bunch, but it was worth it. 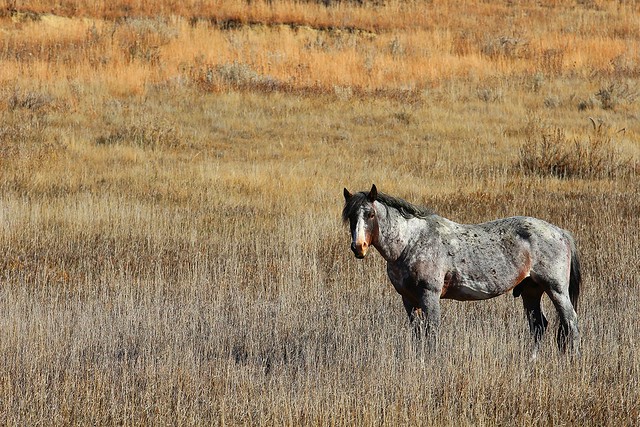 History lingers on up there. The ranch house for the Peaceful Valley Ranch is stalwart in the sagebrush, and the various structures surrounding the house seem to have been born of the prairie. Fingerprints of the settlers and ranchers still leave their impression on the landscape, in the subtle way of the Old West. 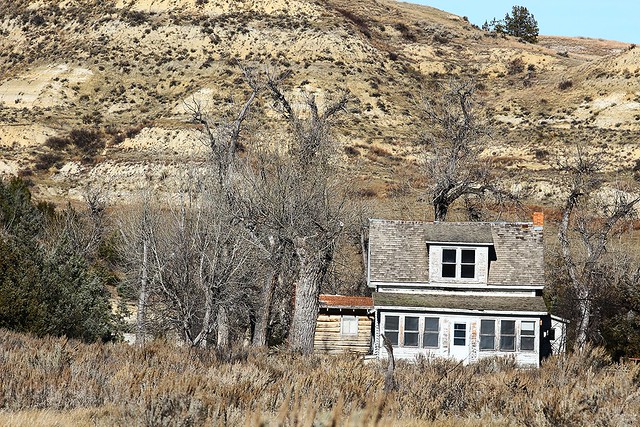 We picnicked just south of Medora at Sully Creek State Park, and were able to do some hiking there along the Maah Daah Hey trail with the dog. The trail spans some 100 miles of North Dakota, and we enjoyed a couple of miles of it overlooking the Little Missouri and farms and ranches nestled in the valleys. 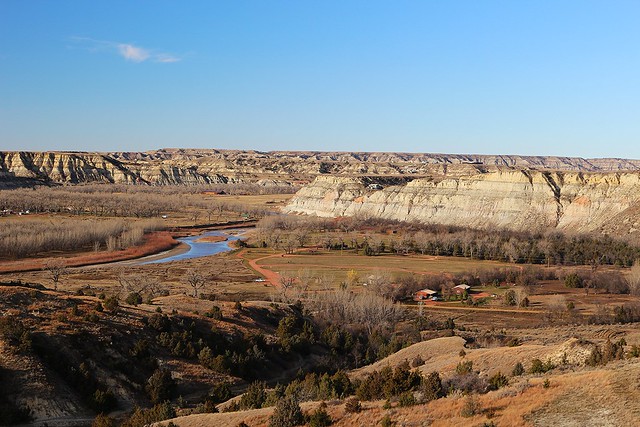 The soil was loose and sandy, and the rocks were so different from the rocks in the Hills. In the sunlight, trails in the Black Hills are dazzling, sparkling with quartz and mica and other minerals. In North Dakota, the soil was sandy and dull, without a glimmer of quartz or mica. We followed the trail in and out of the wind, from sheltered ravine to exposed hilltop. Again, the views were stunning. 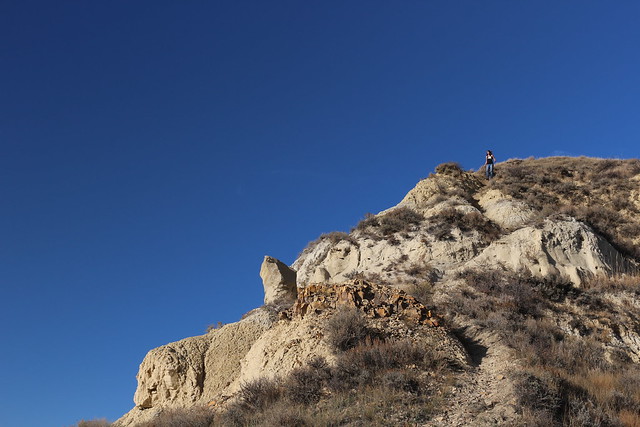 The wilderness of North Dakota is otherworldly, with the pale jutting ridges of the Badlands, the strange forests of juniper, the sandy soil, and the quiet of emptiness, but an emptiness so full, it sings.