Fourteen miles down. Ten to go. And there was Phantom Ranch! 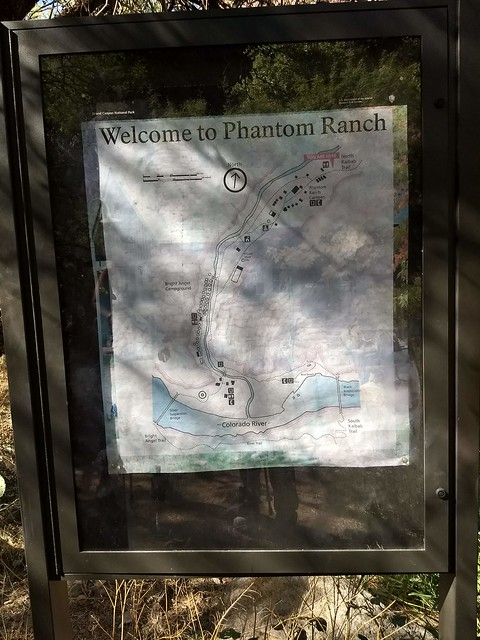 We arrived gratefully at Phantom Ranch around 10am (we made really good time!), and took a lovely lunch break. We took time to change socks, rehydrate, and mail postcards from the canteen, which were stamped with the words “Delivered by Mule.” We visited with other hikers and runners, and finally got back on the trail, right into the heat.

The sun was high by now. And we three poor northern girls were definitely missing the cool of the morning. But we slathered on sunscreen, sported our brimmed hats and chugged plenty of water and electrolytes. We were good to go. The distance between Phantom Ranch and River Resthouse passed quickly, and we enjoyed the long views up and down the Colorado as we crossed the long span of the Silver Bridge, and a bighorn sheep posing beautifully for us next to the trail. 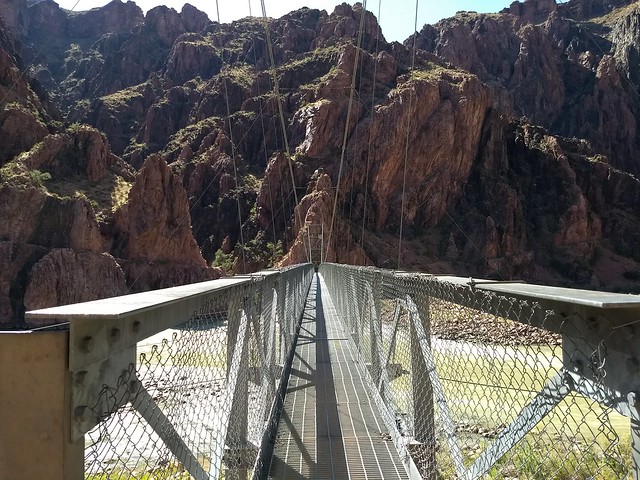 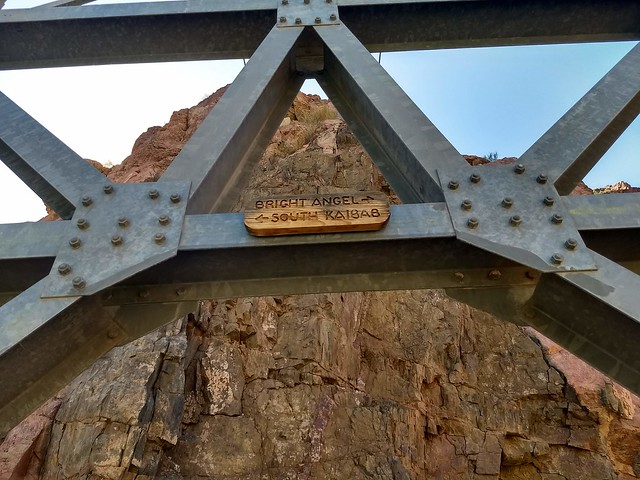 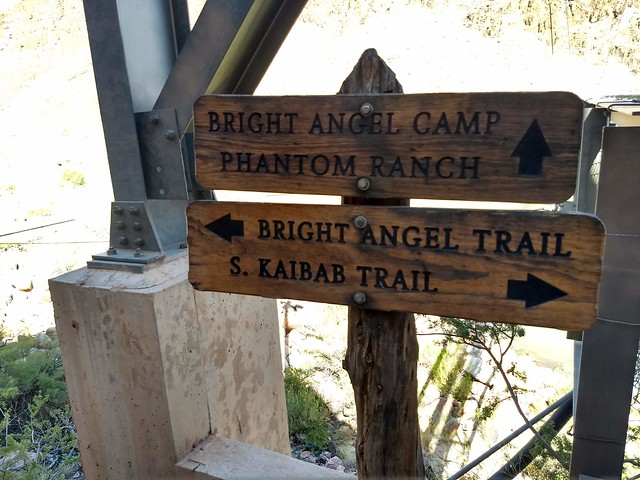 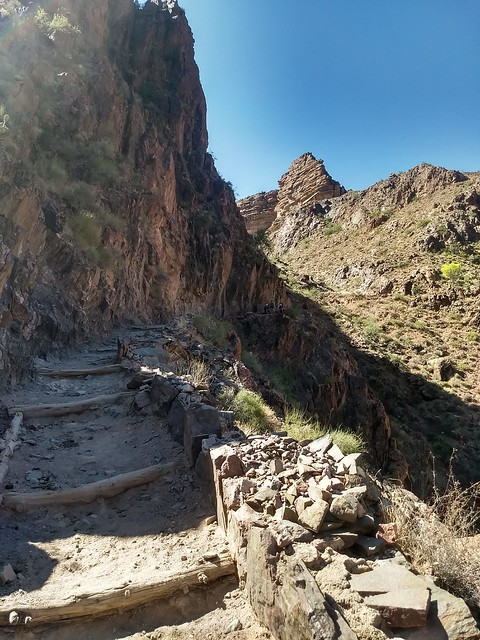 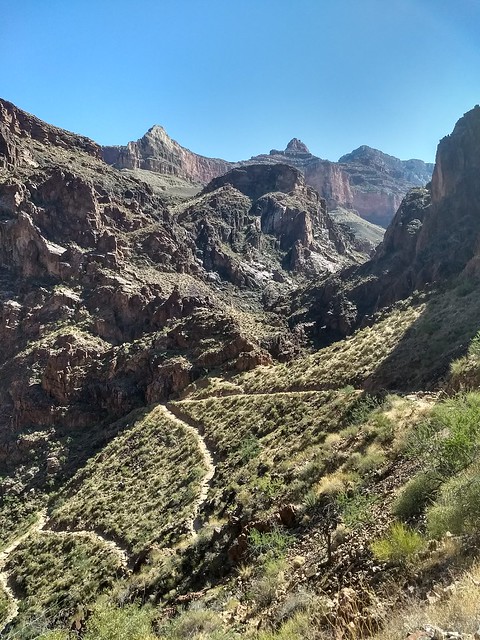 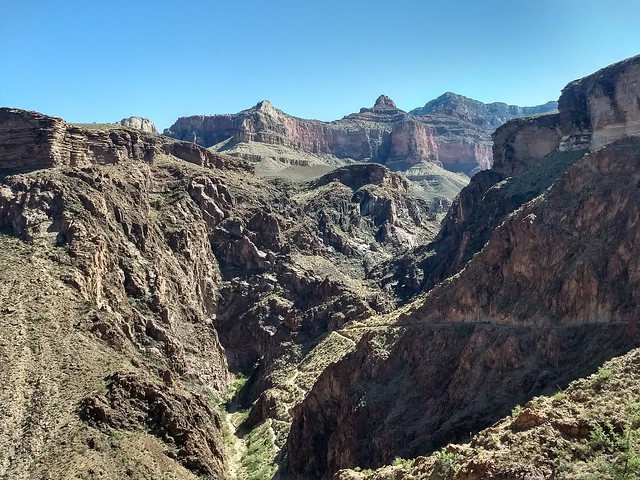 The Corkscrew is an intimidating series of bigger and bigger switchbacks, bringing you out of a small canyon up into a larger one. The switchbacks seemed endless, and now we were hiking in the sun and the heat. It took forever to reach Indian Garden Resthouse, and then we had four and a half miles to go, with 3-Mile Resthouse and 1 1/2 Mile Resthouse splitting up the rest of the distance. 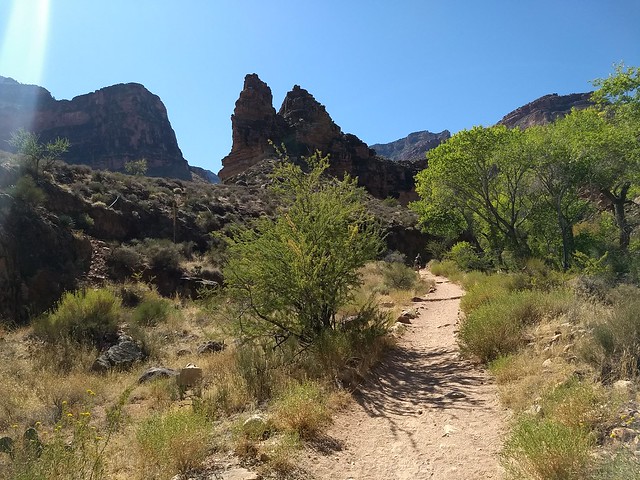 Indian Garden was memorable. They were doing construction of some sort and had a crazy helicopter thing bringing in equipment and taking stuff out. When we finished and were looking down into the canyon, we could still see it, 3000 feet below. Amazing. 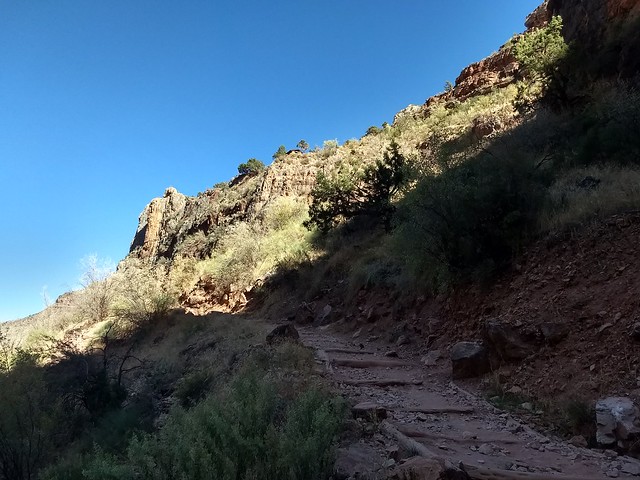 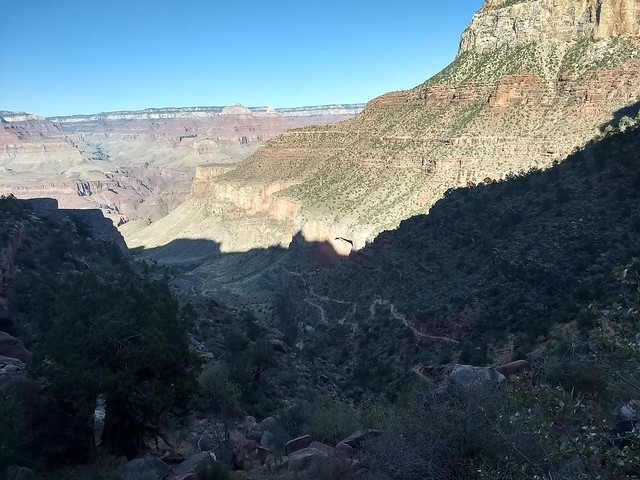 The last three miles were the toughest of all, and possibly the most beautiful. The sun was dipping lower and a shadow was spreading over the trail, so the heat was no longer as much of an issue. But by now, we had already hiked 21 miles. With the whole canyon spread out behind us, and with us slowly creeping our way up the precarious side of the canyon, the bigness of the canyon was overwhelming and awesome.

We could catch glimpses of the next resthouses, or glimpses of the Rim, and we could see trail and switchbacks that we were aiming towards way in the distance or way overhead, hundreds or thousands of feet up. If we looked hard, we could barely make out other hikers, looking as small as fleas. I’ve never felt so small in my life. At Indian Garden, there still is 3000 feet of vertical gain left. At 3-Mile, there is 2100 feet left. And at 1 1/2 Mile, there is 1100 feet left. We knew we were getting closer, but until you’re done, the hiking is just plain hard. 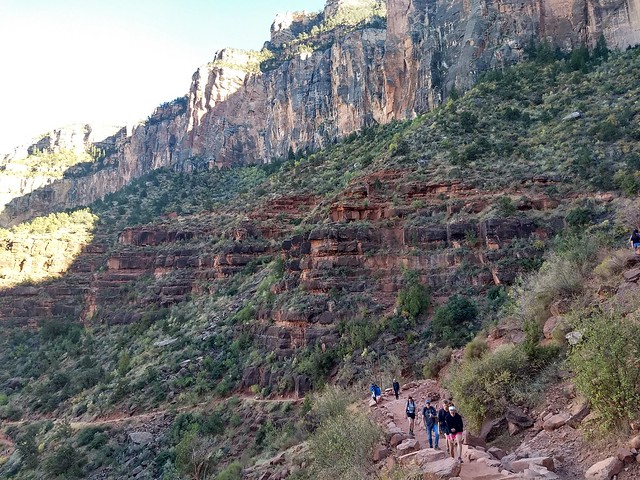 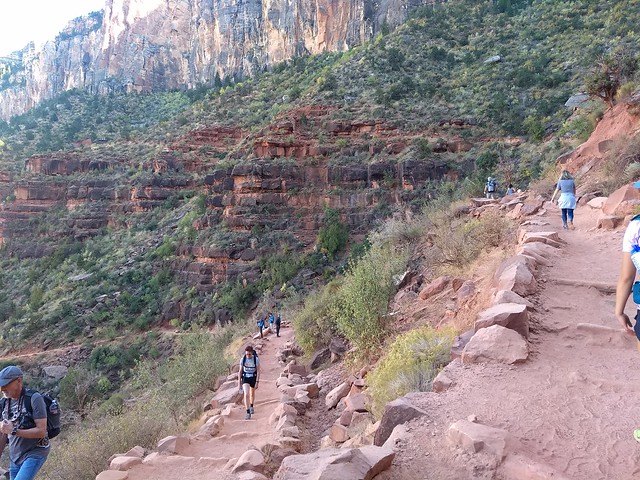 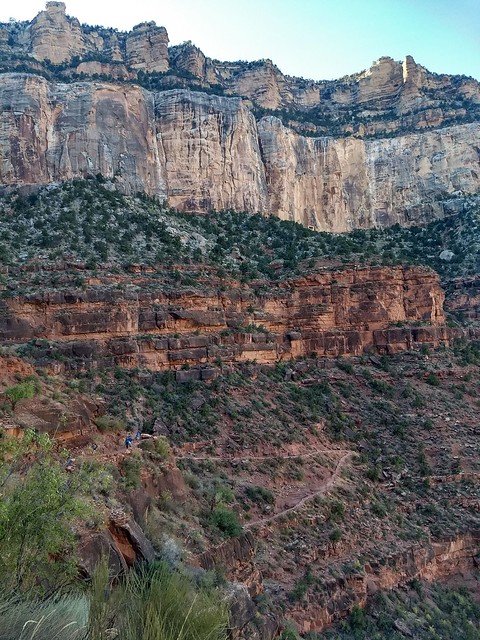 From here on out, certain groups looked tireder and tireder, while others looked fresher and fresher (and less equipped, fit, or able. Flip-flops, for instance, 1500 feet below the rim). It was easy to pick out the day hikers from the Rim-to-Rim hikers. But Sarah and Jenny both commented on (and we all laughed at) the pitying, “judge-y” looks we received from clean, fresh-looking hikers who clearly were wondering how we could be so tired and worn-out looking so close to the South Rim.

And then we could see the end of the trail, and those last few hundred yards felt everlasting. We emerged at Bright Angel Trailhead shortly after 5pm, for a Rim-to-Rim time of just under 13 hours. 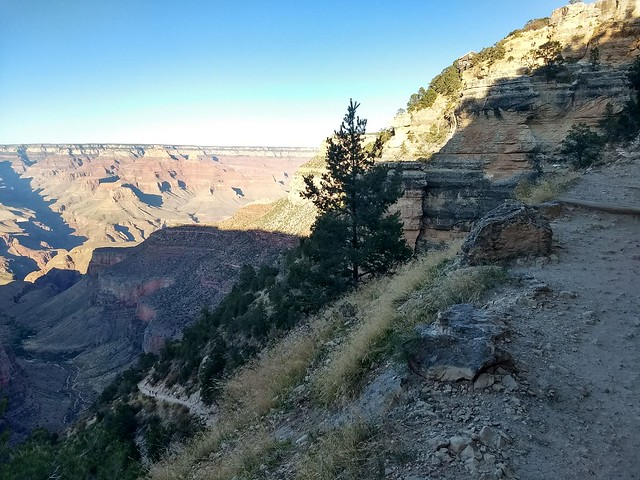 It was awesome. And terrifying. And exhilarating. And beautiful in ways I never expected. 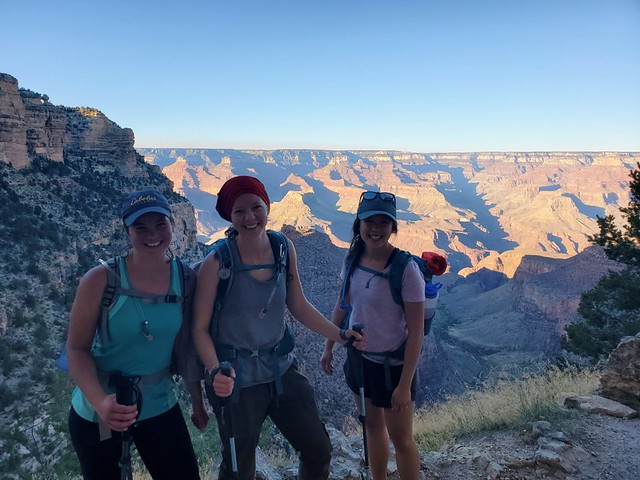 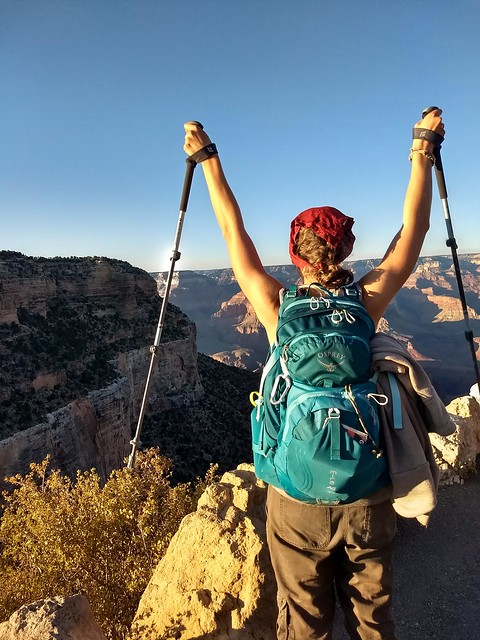 And I would do it again in a heartbeat.

Finally!! This post series has been much anticipated and at last is ready to publish! Easily the highlight adventure of this whole year was training for and hiking a one-day Rim-to-Rim at the Grand Canyon in early October, with roughly 2 months of training hikes leading up to our trek. As a hike that makes it into the Backpacker Magazine list of top ten most dangerous hikes due to the heat in the summer, this is one I highly anticipated, and is the first hike of this caliber I’d ever done. What an adventure!

The Rim-to-Rim is a 24 mile hike boasting roughly 5000 feet of elevation gain (as well as 6000 feet of descent), exposed trail, amazing views, and the exuberance at the end of finishing such a monumental hike. The recommended time to take for this hike is 2-3 days according to the official literature, and the beginning of the Bright Angel Trail (the end of the trail for us) sports this lovely, inviting sign of a poor sunburned guy vomiting: 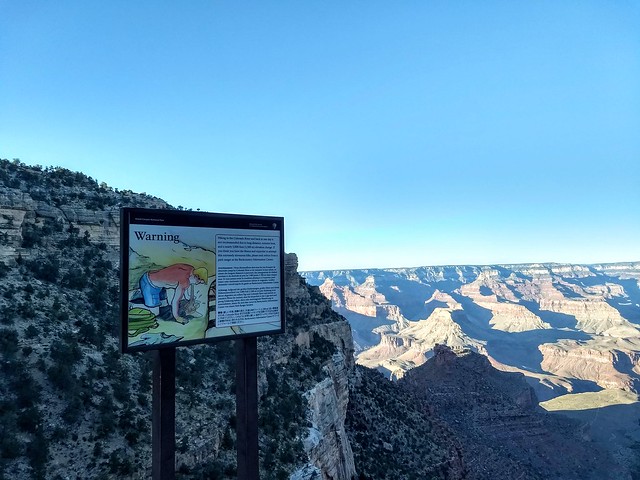 There were lots of reasons for us choosing to do it in one day, but probably the biggest reason was the challenge. Just the challenge. It didn’t disappoint.

We got started in the wee hours of the morning on Monday, October 7. We had slept (sort of) for three hours or so in our car on the North Rim at the North Kaibab trailhead. We were all so excited, I’m not sure how much we actually slept. Then in the cold and dark, we got ready, bundling up against the winterish 27 degrees, excitedly greeted another group of early morning hikers in hushed tones, and with the adrenaline waking us up fast, set the first foot on the North Kaibab trailhead.

It was pitch dark at 4:20am, and the beams from our headlamps illuminated a sandy trail and heavy brush and trees on either side. The walking quickly became rather hypnotic. Walking in the dark is a strange feeling, without the changing scenery of the daytime, either for interest or perspective. We couldn’t see depth or distance, or the steepness of the terrain, or the switchbacks below us. We didn’t get far in before we realized we were not alone on the trail, and could see headlamps bobbing behind us and before us. What a strange sight, stories and stories below, headlamps bobbing along in the dark.

The trail wound along the canyon walls in series of switchbacks, until we could look back up and see again a trail of headlamps. How pleasant, and how strange. For an hour and more, that was all the perspective we got of the bigness of the canyon, the distance and closeness, both, of the headlamps in the dark.

Then the light. Our eyes were dazzled in the pale, dim light by the heights, and dropoffs, the winding trail clinging precariously to the sheer canyon sides, the color, and the signs of beautiful desert life. Prickly pear, huge and with large purple fruits, other strange cactus plants with towering spires 15 feet tall, plants that looked like yucca or mangave relatives. All beautiful and strange. 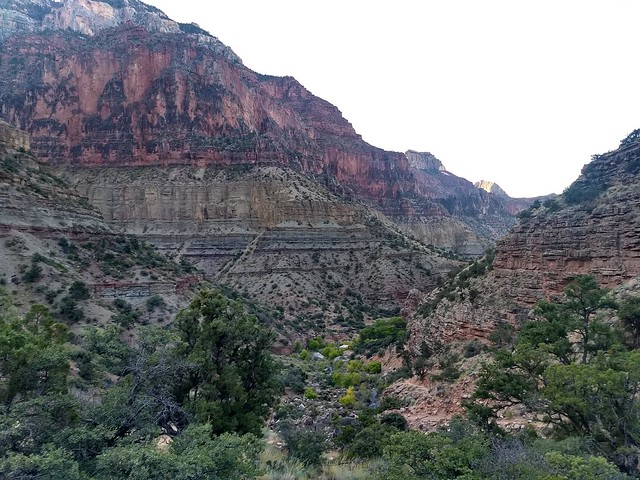 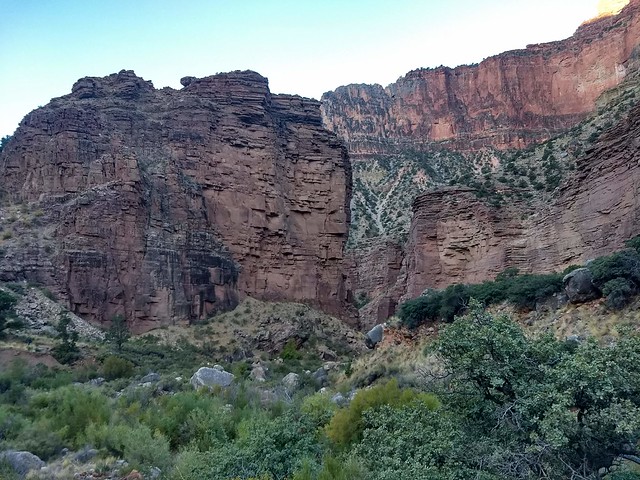 One of the best parts of this hike was the trail camaraderie, which began early on. One hiker in particular is a special memory, as we leapfrogged with him and his hiking partner for the first 14 miles. Mark encouraged and cheered us on, as a veteran Grand Canyon hiker, which was a huge boost to the morale of our little group. 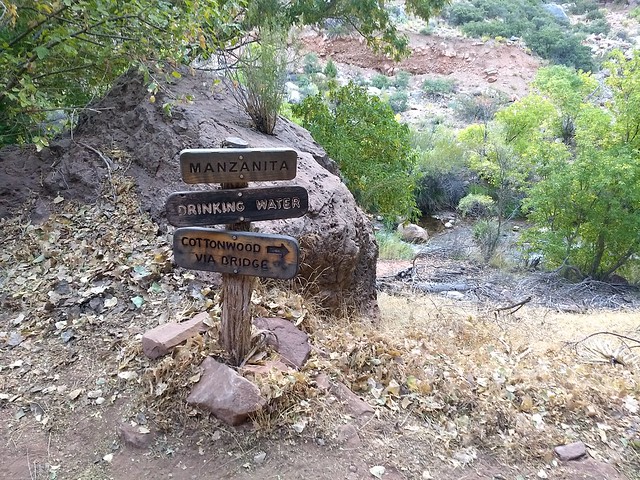 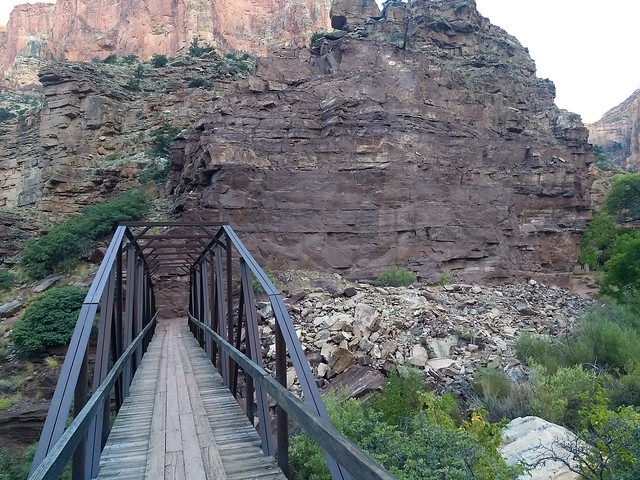 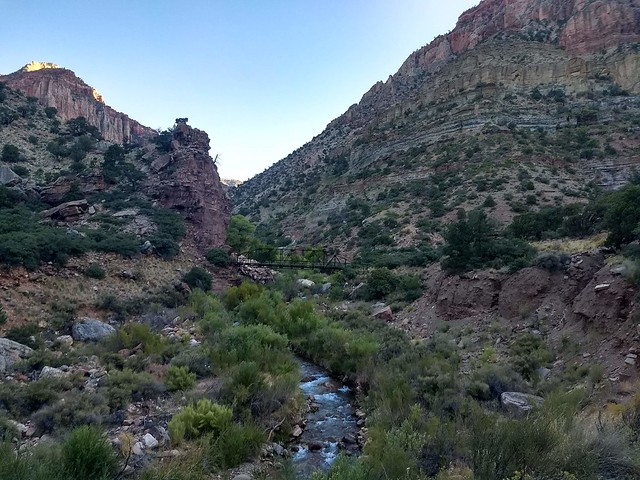 About 6 miles in, we had our first view of the South Rim, hazy and indistinct in the distance: 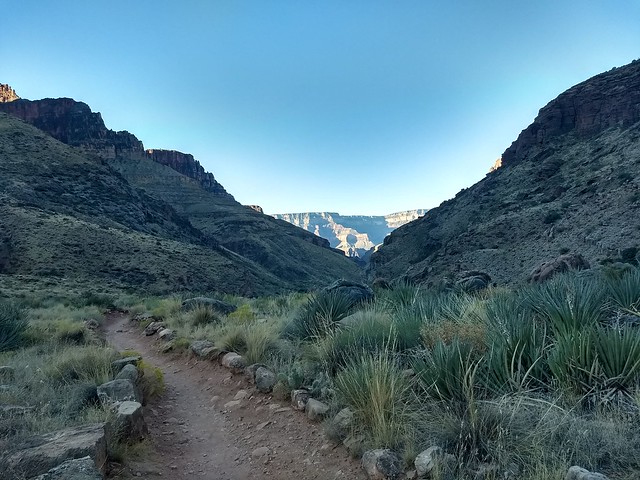 It was exhilarating and rather terrifying and beautiful and awe-inspiring. It was so far away, so small in the distance, and so high up. That was where we were going. And at this point in the trail, we felt great. The trail was easy, temps were cool, we weren’t yet sore or tired, other than some knee pain I had anticipated and was managing with soft braces and Ace wraps on both knees (this was preventative, since I’d been having knee pain leading up to the hike), and a sturdy hinged knee brace for my right knee for the descent. I looked gimpy, but who cares?

I was surprised at how green and lush the canyon was. The trail follows a creek nearly the whole way, and the moist smell of water loving plants was unexpected. It was deliciously cool and fresh.

It was all a countdown to Phantom Ranch, which, though not the true halfway point, feels like a halfway point. But first, the Box. 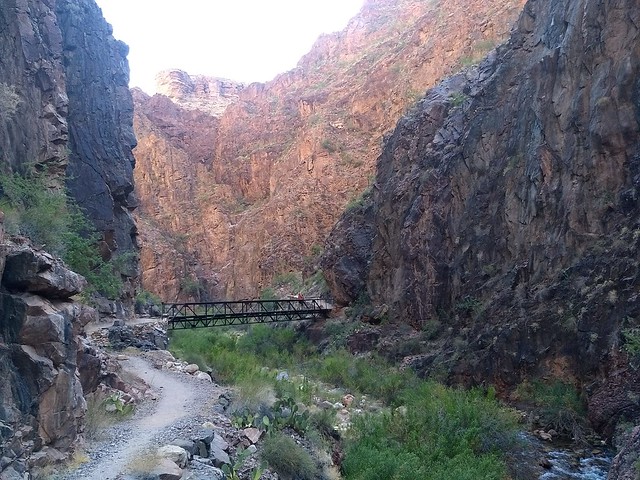 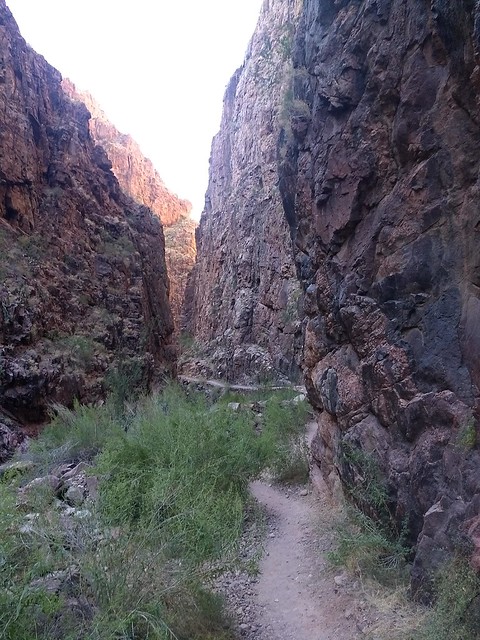 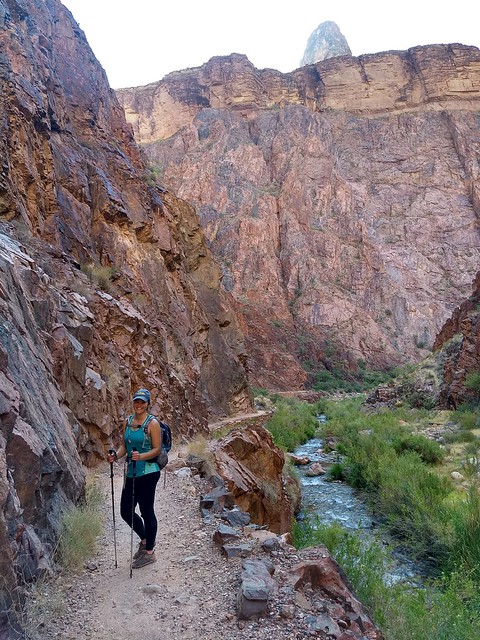 We got to the infamous Box before the sun had even touched it, one of the most dangerous parts of the hike if you don’t get through it before the sun hits it. The narrow, steep sides of this four-mile stretch of canyon are dark stone which soaks up the heat, causing dangerous temperatures reaching well into the triple digits. 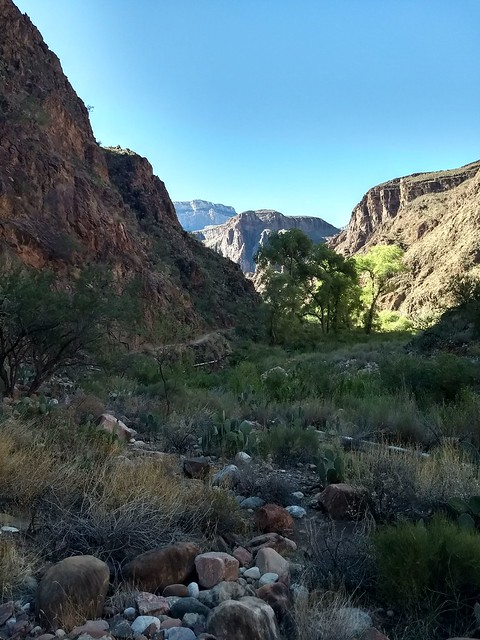 At last the Box was behind us and Phantom Ranch wasn’t far beyond. And it was starting to get warm!