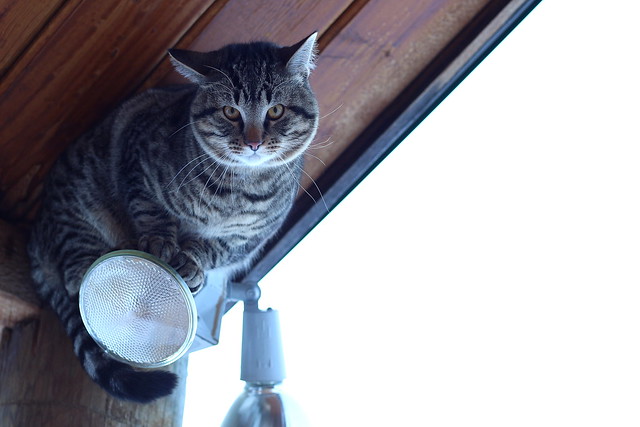 Sometimes it is the old trails that really are the best trails. There’s always something to keep them from seeming redundant. In the case of the Hole-in-the-Wall trail, part of my love of it is pure convenience – I can tumble out the door and be walking along the trail in 5 minutes, remote, away from anybody, in the quiet of the trees. Part of it is nostalgia, memories, and the sheer beauty of this region. The Hole-in-the-Wall road winds along through ravines and low places, often overlooking or crossing an old nameless, boulder-strewn creekbed that eventually joins up with Battle Creek. This has been a favorite trail since I was a kid – because Hole-in-the-Wall has always been a favorite destination. I’ve written about Hole-in-the-Wall a handful of times before, that it is the site of an old mining camp, that the miners diverted Battle Creek straight through a ridge, creating what we now know as Hole-in-the-Wall. Something about this place is comforting to me, and not long goes by before I get the hunger to hike to it, the same familiar trail, the same trees and rocks and sandy, rocky streambeds. Since I am leaving the country at the end of this week for a month, I wanted to hike to Hole-in-the-Wall again. Mom and Dad were the only ones home, and they agreed to tag along. Off we went, with both of the dogs tearing around, having the time of their lives. 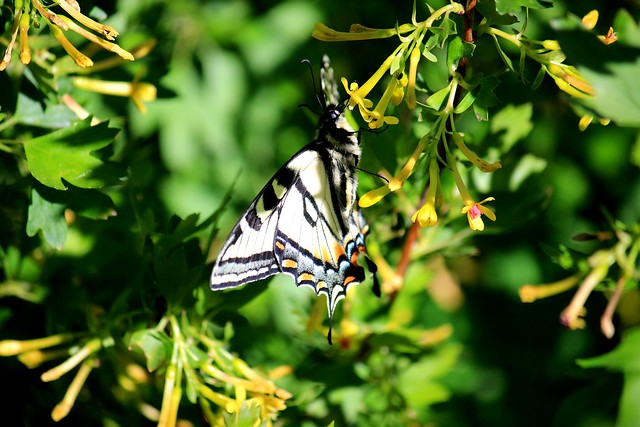 We were chatting, watching for fossils and flowers and critters, talking to the dogs casually. I had been down in the creekbed looking for fossils and had just come back onto the trail. Opal, in her play and curiosity, headed down the bank, underneath a still-flowering golden currant bush. We called to her and continued walking, and Mom mused, “I wonder if we’ll lose any dogs to snakebite this summer.” It is just something you think about when you live in rattlesnake country, and this is the time of year they start showing up. Talk about a well-timed comment. No sooner had those words left Mom’s lips, than that unmistakable sound burst from underneath the currant bush – a rattlesnake. The sound is one of those you never forget, unless, of course, you’re my Dad and you can’t hear the snake’s rattle, which is a little unnerving. Well, Opal came tearing up the bank around the other side of the currant bush, apparently unhurt (“Good,” I’m thinking. “How in the world would I have broken the news to Sarah?”). Both dogs were immediately captivated by the strange sound, and then immediately got yelled at.  Trixie, the silly thing, actually responded to verbal commands and getting swatted in the face with a ballcap, which surprised me, since I always assumed Trixie’s first rattlesnake would also be her last. In the next few chaotic seconds we got the dogs by the collars and suddenly felt a little calmer. 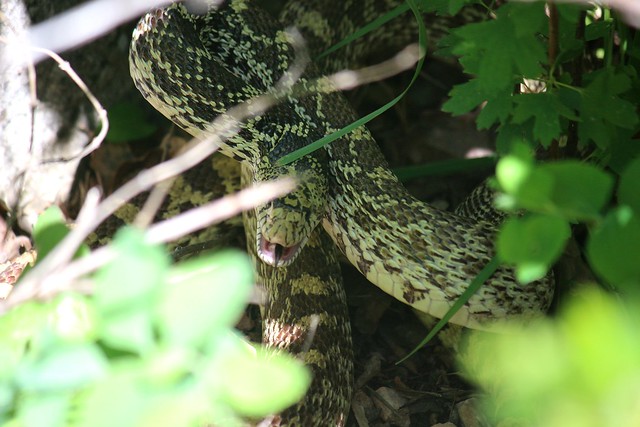 It’s no fun hearing the snake but not being able to see it. Once the dogs were under control, we got a good look at the rattler, and he was a big one, hunkered down beneath the currant bush in a shaded spot. I honestly have no idea how Opal didn’t get bitten, except to say that God didn’t let her get bitten. Where the snake was coiled was right where Opal had jumped. He was thick and angry-looking, and we watched him for a couple of minutes before continuing our hike, with the dogs leashed this time. Once you see one rattlesnake at such close quarters, suddenly you’re convinced there are snakes in every clump of tall grass, under every fallen log, and in every pile of rocks. A little irrational, but that’s just what happens. Just like when you find one tick, suddenly you’re crawling with imaginary ticks. 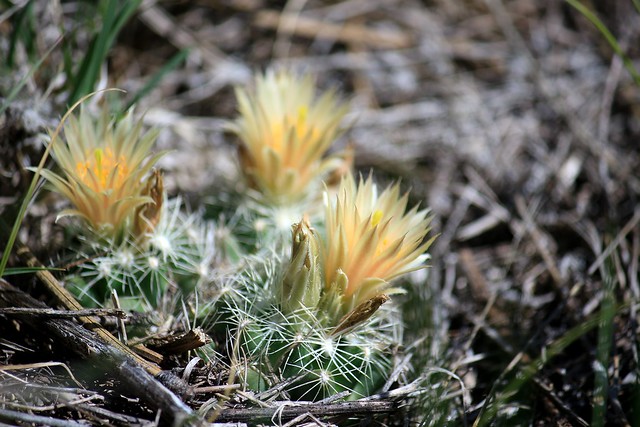 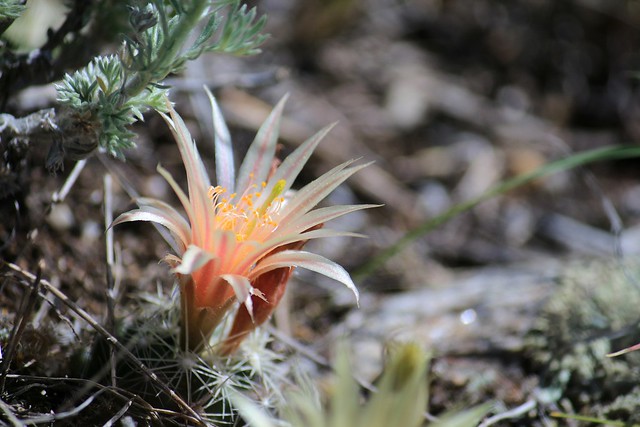 We made it to Hole-in-the-Wall without meeting anymore snakes, and enjoyed the flora in the meadow  there. Particularly the Missouri pincushion cactus. We found a whole colony, with little families of cacti all growing in groups, and some beautiful solitary ones with picture-perfect blossoms. Shades of yellow to shades of peach, glimmering and gleaming in the sun. I had never seen so many. 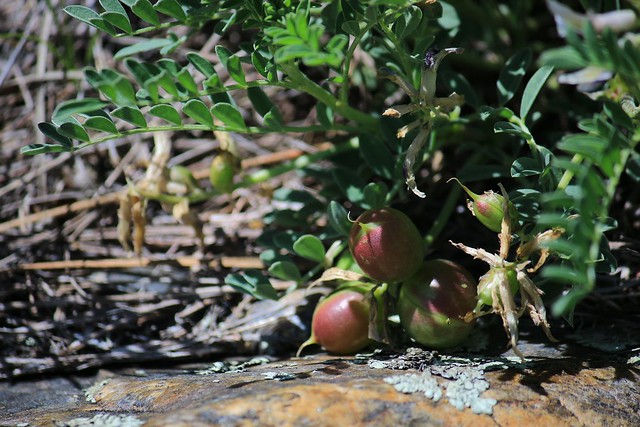 There was plenty of dame’s rocket, violet woodsorrel, larkspur and larkspur violets, and even a groundplum milkvetch with its cute little fruits. On the way back, we checked under that same golden currant bush for Mr. Rattlesnake. We tossed a few rocks down the bank into the bush to see if we could stir him up a little bit. He had moved on. Smart snake.

Sometimes it really is the old trails that are the best. Because they’re the ones with all the many, many memories. And I’m really glad we still have our dogs.

What a full Sunday! After a morning of worship and fellowship with our brothers and sisters at church, my family drove out to Pactola Reservoir to picnic and kayak. What with all of us being employed, Anna still being in highschool, and Dad in seminary, our “just for fun, the whole family together” time has been somewhat rarer than it used to be. So we remedied that with our picnic at Pactola Reservoir. 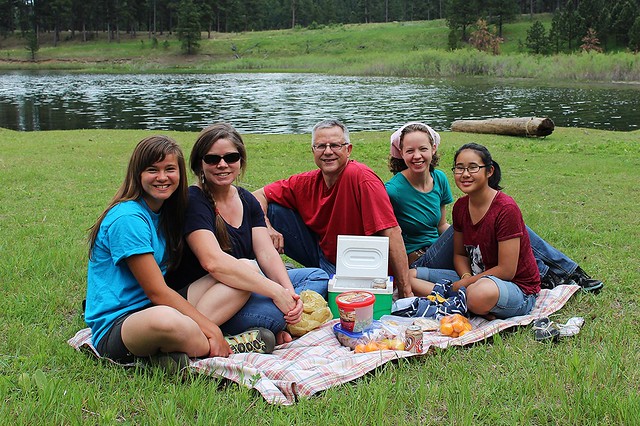 Beautiful weather and very little wind made for a nice kayaking excursion across the lake. Pennington County sheriff’s deputies were cruising around in a speed boat, checking fishing licenses and looking like they were enjoying their job – I loved seeing that. With all the vitriol directed at our public servants, it was fun seeing them doing something like that. I can’t imagine cruising around in a speed boat is much of a chore! I wanted to flag them down and ask if they would make wakes for us to kayak in, but they got away too fast. 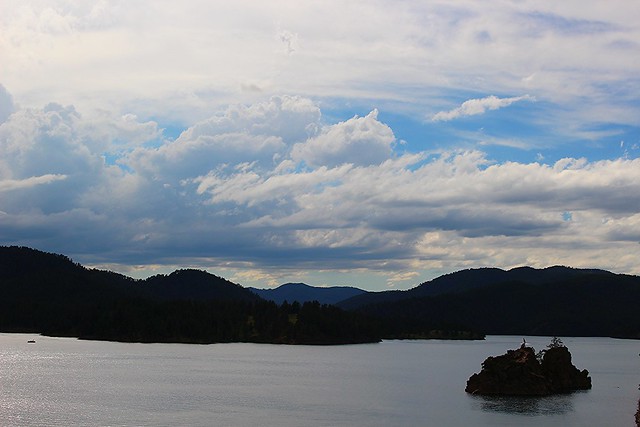 And finally – finally! – we drove home via Rapid City and picked up the newest addition of the Adrian household! Meet Trixie. I think it was love at first sight for all of us, even for Dad, who tends to be a little more reasonable about this kind of thing. 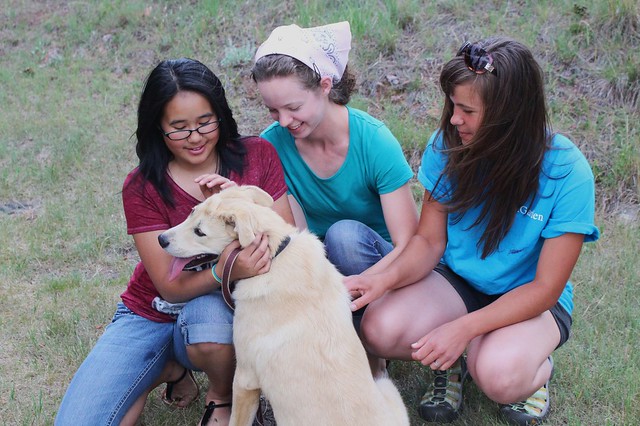 Trixie is a husky-golden retriever mix, or at least that is what we were told – She has all the grovelling sweetness of a golden, and at the age of seven months she still has all of her puppy energy. She was so excited and playful, to the point that she just about mauled each of us this evening, and she thinks she is small enough to curl up in a lap. Trixie already is treating us like “her people,” and she was determined to make herself at home – inside the cabin. That was a big “no”, but she is sleeping in her crate right now, and seems content. 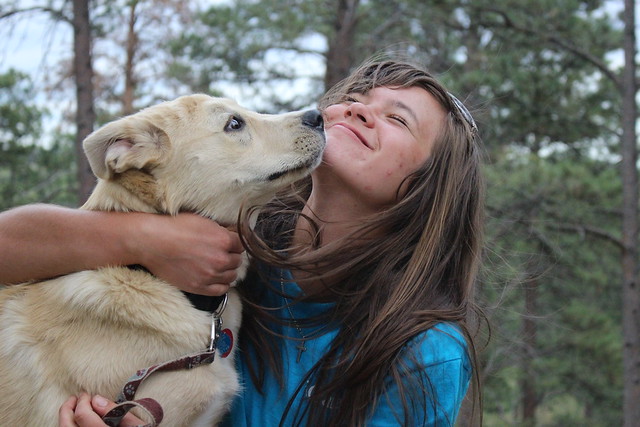 Needless to say, she was a little freaked out and overwhelmed, but she has the sweetest disposition and already seems to be settling in. The cats and she haven’t yet had a chance to come to a truce, but I’m sure they will in time. The cats had Baby, our sister’s dog, very well trained and it didn’t take long for them to train her. They kept their distance this evening, hungry for attention as usual, but uncertain of the intruder. I felt kind of bad, but they’ll figure it out. 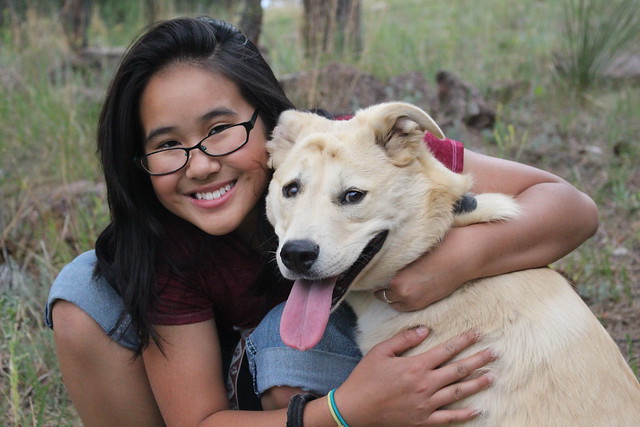 We spent the 45 minutes before dinner playing with Trixie and taking pictures. Of course, we all wanted pictures with our new pup. I can already tell she’ll be a good fit. It has been seven months since we had a dog, and I think we were all very ready to have a ready-made hiking buddy, company when home alone, and just the delight a dog can bring to a household. 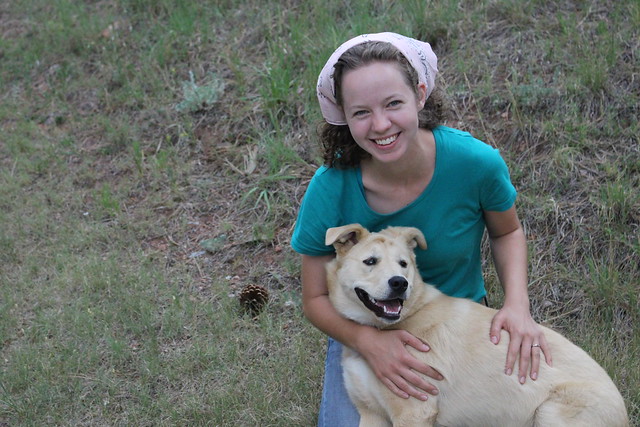 Our pets always remind me of the loving, good God that I serve, who created such an amazing world for us to live in, for us to enjoy, for humanity to have dominion over with gentleness and wisdom. God created this world to glorify Himself, and although humanity is the crowning piece of that creation and we all, Believer or not, bear the mark of our God, I do believe He takes delight in all of His creatures, even those not made in His likeness.

Welcome to the family, Trixie!