Any time spent away from home leaves me hungry to search out my favorite places, as if to check on them, or remind myself that they are real, and are not just a product of my imagination. After a week in Illinois (I got back last week), I sought out what has become a favorite drive of mine, the Custer State Park Wildlife Loop. Now, it is far from a favorite of mine in the middle of the day, in the middle of the tourist season. But at dawn, before almost anyone else is up, it is heavenly, peaceful, serene, and gloriously empty, yet full, so full. This particular morning, my hope of capturing the sunrise was thwarted, but I was gifted instead the coziness of glowering clouds and drifting fog and shrouds of mist. In spite of the rain and wet, the meadowlarks were singing as loudly as ever, and the buffalo calves were frisky and ridiculous. The landscape was unbelievably green. It truly is incredible how beautiful the new grass looks when the dead brown grass has been burned away. With the mist and the rolling hills, the tops of which were obscured in fog, the landscape looked somewhat as I imagine Ireland must look. Occasionally, the sun would briefly break through and light would dance on the slopes, before being shrouded once again. 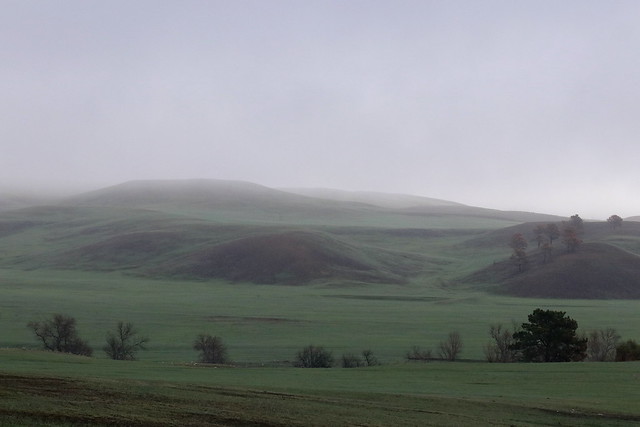 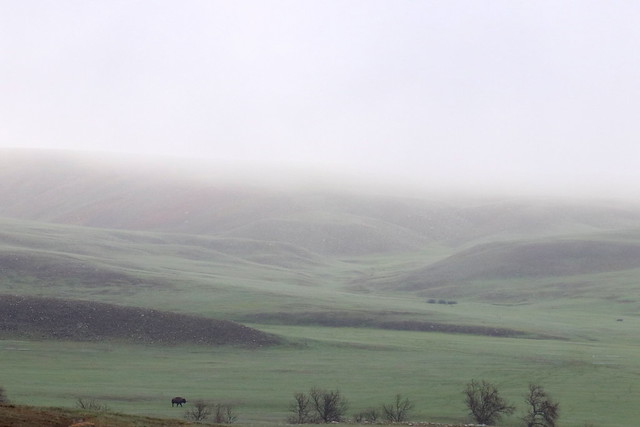 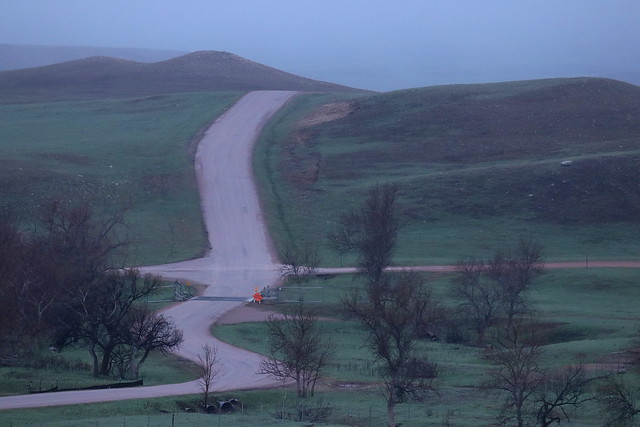 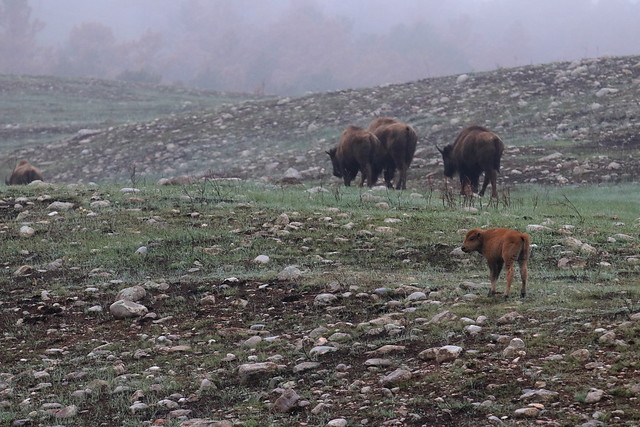 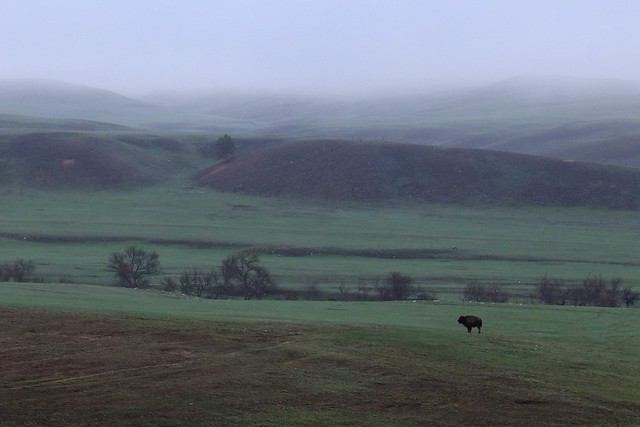 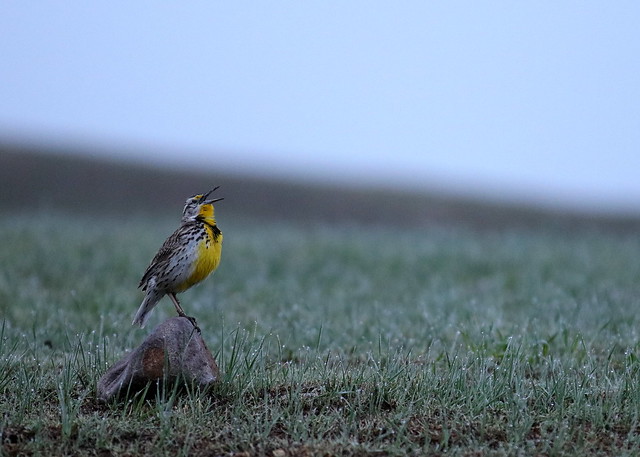 It amazes me that anyone could look at such glorious beauty and not be struck to the heart by awe of our Creator. God’s glory is on full display in the wonders of His Creation. If my heart needs a revival, a walk in God’s woods or a drive through His prairielands and hills reminds me of the God I serve and love, and how good He truly is.

An early morning drive to enjoy the dawn and to photograph the sunrise in the Park didn’t turn out exactly as planned, but no drive with a camera in hand and eyes to see God’s goodness is ever really wasted. Towards Hermosa, I drove into a large fog bank, completely obscuring the sunrise, and the fog slowly moved west, coming to a stop against the rim of the Hills. The Wildlife Loop was bright and clear, though banks of fog could be seen hanging in the trees towards the east. The beautiful Wolf Moon, waning now, hung in the western sky like a pearl. 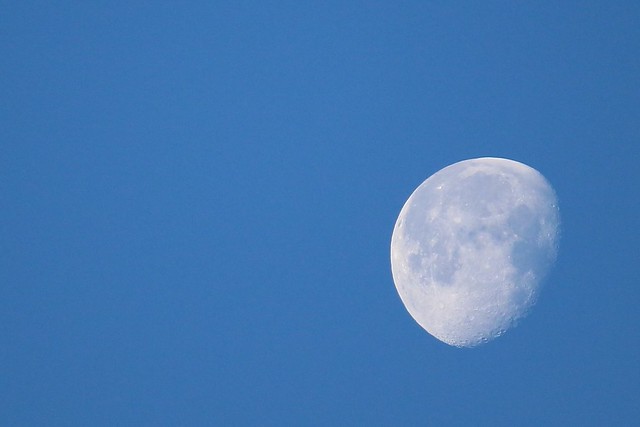 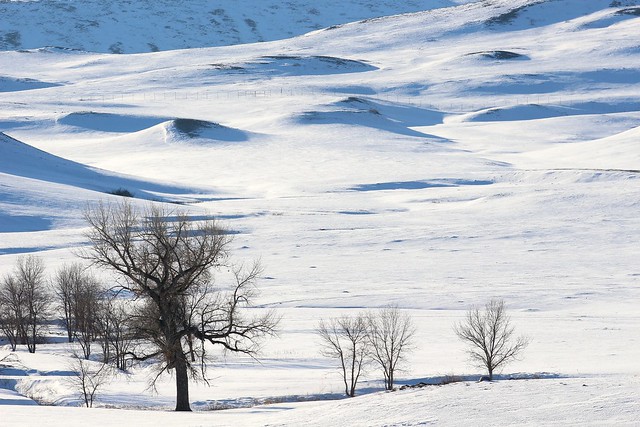 There was an element of sadness driving through the Park and seeing the destruction left in the wake of the Legion Lake Fire. The snow whitewashed over much of the evidence of the fire, but the blackened hillsides, the charred or browned trees, and the smell of ash gave it away. I have to admit, it was worse than I thought it would be. Parts of the Park will look very different, with the standing dead, charred and blackened, scarring the landscape. Once the needles fall off the dead trees, it will be even more striking. The torched trees, blackened from root to crown and completely denuded, were grotesque against the snow, with yellowed trees on this side and that, somehow having escaped being torched. In places, the fire had eaten through fence rails like acid, though other stretches of fenceline were untouched. Lots of manpower will go into repairing those fences. 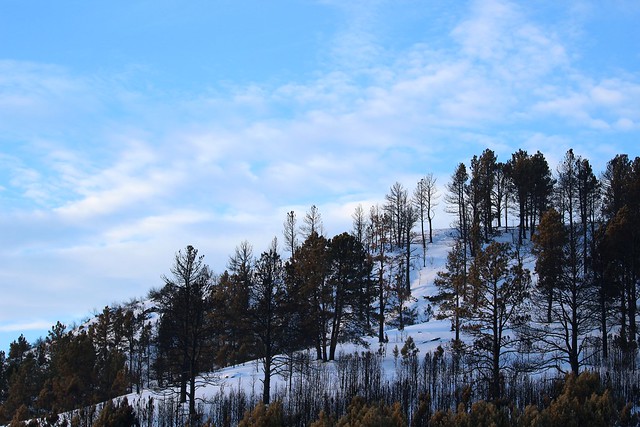 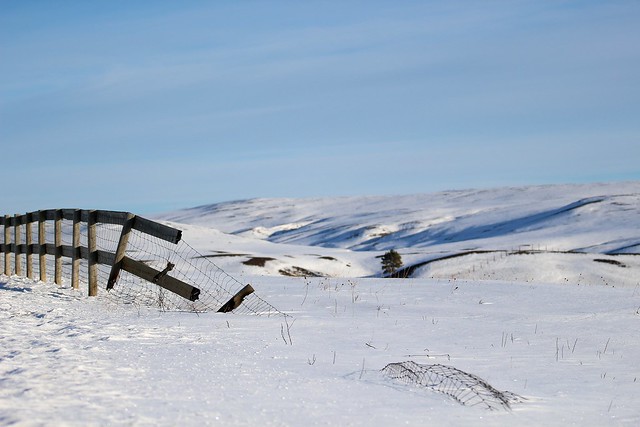 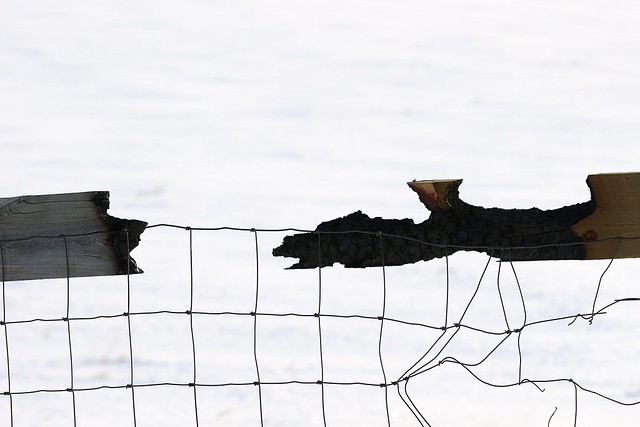 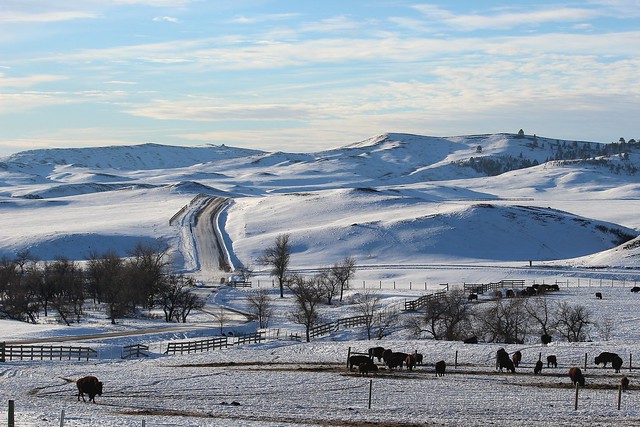 How amazing: fire, while destructive on the one hand, is one of the means of renewal that God has put in place for the maintaining and flourishing of this world. Change is just a part of life. While everyone is fond of Custer State Park and we’re used to it looking a certain way, that just isn’t how nature works. It isn’t meant to stay the same. Change is one of the ways in which equilibrium is maintained. There is a natural ebb and flow, a cycle of life and death and life again, a cycle of destruction and renewal, which occurs on the micro scale, as well as with large-scale natural disasters. I know that the forest will renew itself or will change, and life will go on. I also know that come springtime the Park is going to be greener and more vibrant than it has been in years, with all the old grass and underbrush burned away. It will be a sight to behold! 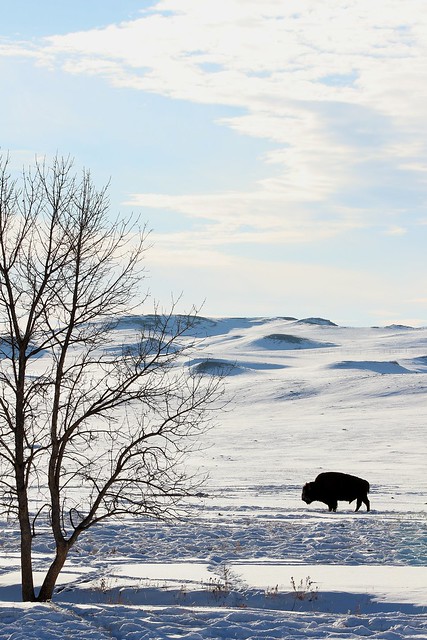 And even now, in the meantime, life goes on. The buffalo were mostly in the corrals, feeding on hay, since their food supply was drastically affected and they will require hay for the rest of the season. A handful of youngsters frisked and played, chasing one another, though the solemn buffalo look never left their faces. Buffalo are such serious-looking critters. A few prairie dogs popped out of their little holes in the ground, and a sassy squirrel raced up and down a dead tree. The tiniest of creatures, happily going about their little lives in the wake of a deadly fire. 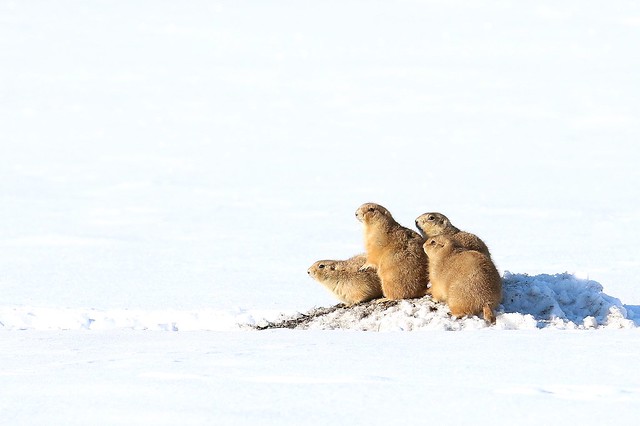 Don’t under estimate the sheer resilience of God’s Creation. He has equipped it well.

After picking plums this morning, I took a quick jaunt onto the Wildlife Loop, and to my delight found the buffalo herd. Unfortunately, tourist season is still underway and a number of tourists had found the herd as well, but the buffalo were scattered and it was possible to get some good shots. 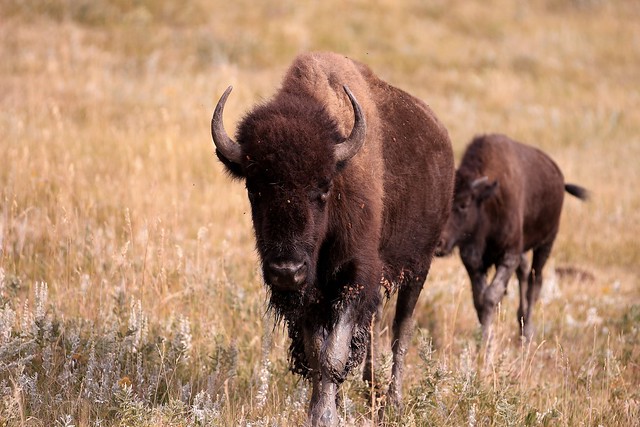 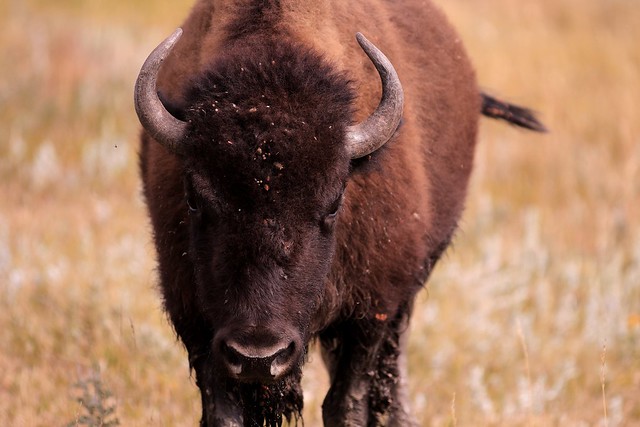 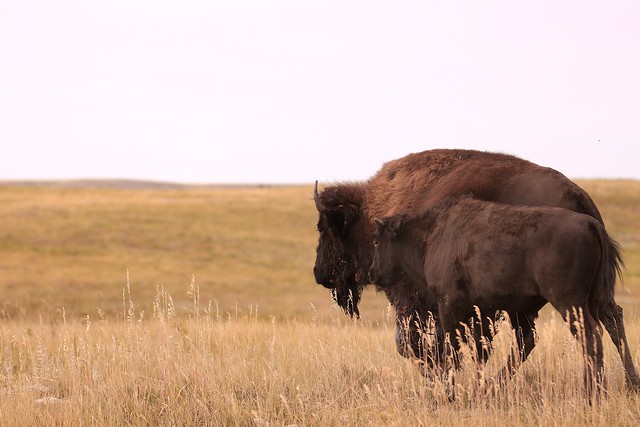 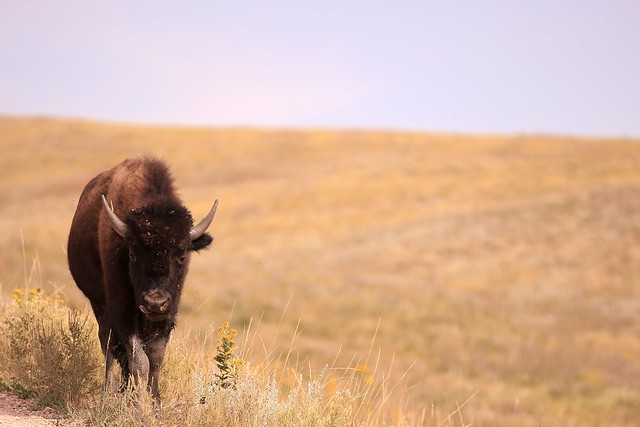 We headed out around 6:00 this morning, just Mom and I, hoping to catch a sunrise over Custer State Park. The smoke had lifted some from yesterday, but a thick haze still obscured the colors of the sunrise. The buffalo were nowhere to be found. Those were the main things that I wanted to photograph, but a drive through the Wildlife Loop (or anywhere in the Hills for that matter…) never disappoints. 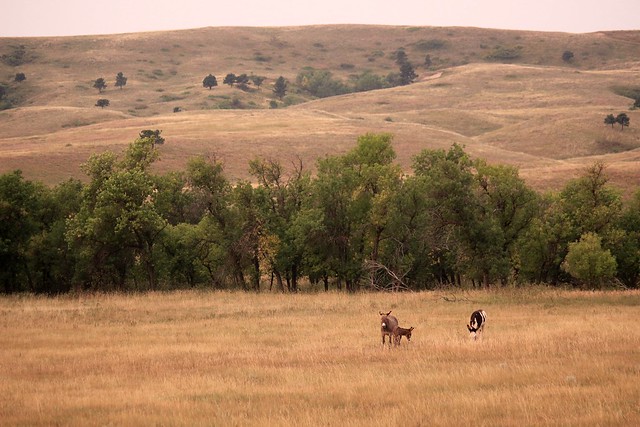 An early drive through the Park means very little competing traffic, and we buzzed down side roads and backtracked here and there, all in all driving the Loop about two and a half times over the course of the morning! Little splashes of color in the fading grasses and shrubs caught our eyes, including these vibrant hawthorn berries. 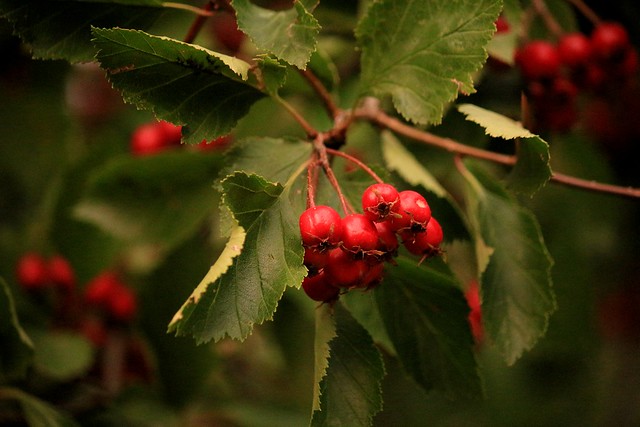 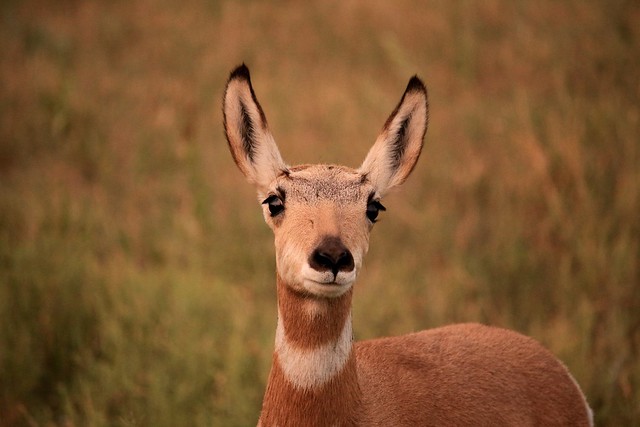 We enjoyed a small herd of pronghorns, and this curious little darling, who frisked about with his elders. A few burros ambled along near the road, a couple pair of mamas and babies, a few yearlings, and a few adults. The burros have such wistful eyes, and funny expressions on their fuzzy faces. 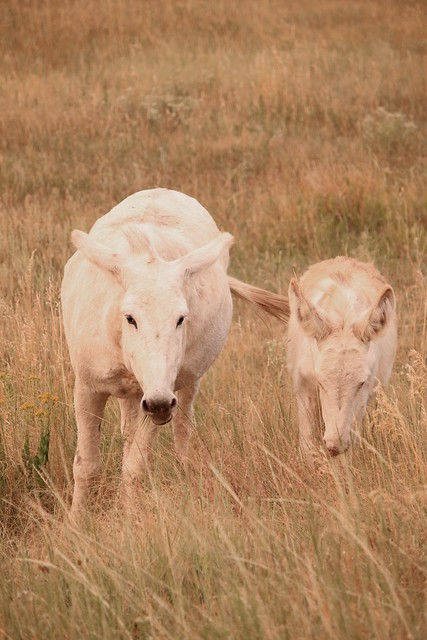 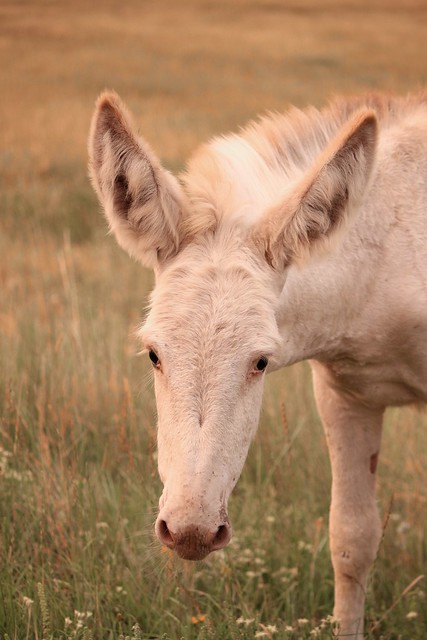 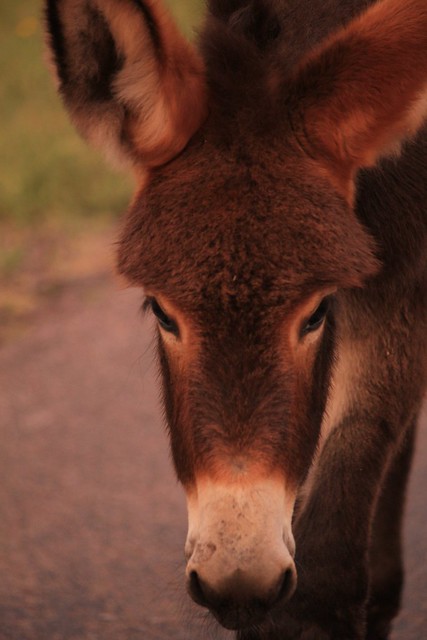 I don’t know that I could name the highlight, but I was pretty hungry on the way home. A beautiful thicket of wild plums was sure a treat. 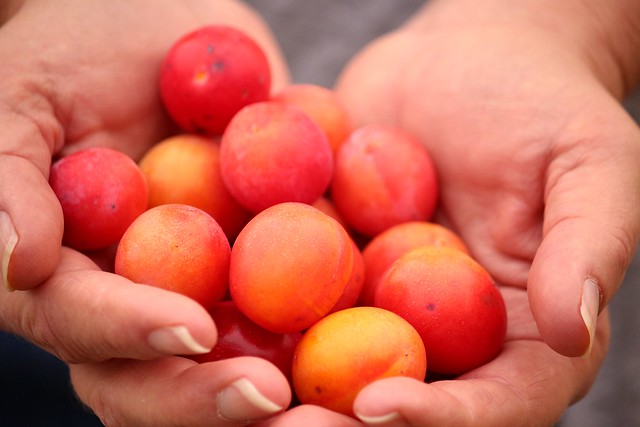 Like I said, a drive through the Hills never disappoints…

The cool weather was perfect for hiking the 3-mile Prairie Trail loop in Custer State Park. I knew immediately that I wouldn’t want to hike it on a day with temperatures in the 90s! Although there is some tree cover, it is mostly prairie and open sky, with a couple of steep ups and downs to warrant a “moderate” rating. The trail is a loop, so it can be hiked two directions. Taking the left hand fork is preferable, since it allows the steepest slope to be climbed down, instead of up. 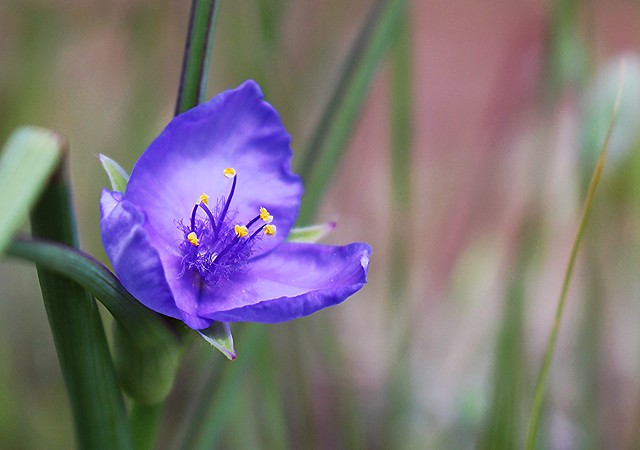 The wildflowers were blooming plentifully, and the spiderwort in particular caught my eye. I’ll have to hike this loop again later in the summer, to see what other wildflowers are gracing the trail. Some wonderful open views looked down on the Wildlife Loop Road and part of the buffalo herd along one of the fence lines. This trail is open to the buffalo, so be aware of that. We didn’t come across any on this hike, but according to Hannah the buffalo tend to congregate in the area of the trail in the fall. 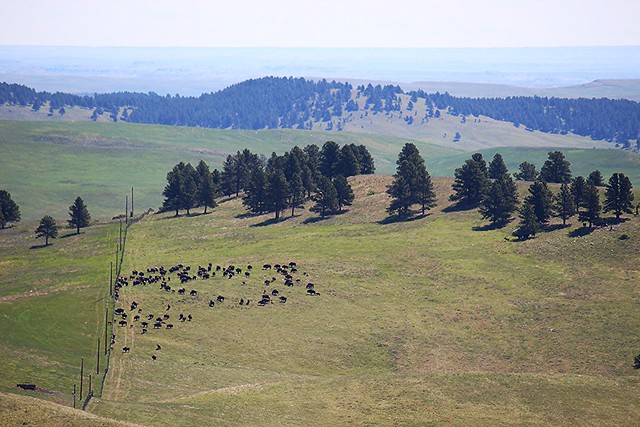 Standing partway up a good long slope, breathing hard and sweating, Hannah and I extolled the benefits of hiking. I’ve never been a runner, she has never been a runner, and unless there is some weird drive a person has to go running, why run? A good hike is just as good exercise, without ending up needing knee replacements at the age of 60. 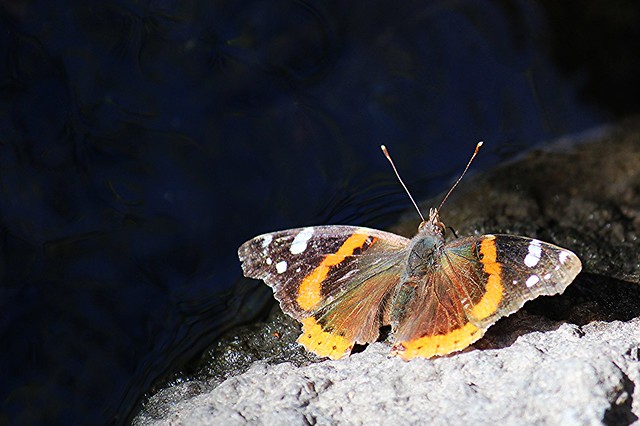 There are a couple of creek crossings, and plenty of poison ivy, so long pants (or caution) are recommended. Sunscreen also recommended, because of how exposed the trail is! Pack water and a picnic lunch – There is a beautiful picnicking spot at about the halfway point, under a small stand of trees, shortly after a steep downward slope and just before the trail emerges again onto the open prairie. A good place for a picnic.  This is a great hike if you’re not wanting to spend all day hiking – I believe this took us about an hour and a half.

It is so good to be able to get away from the distractions of everyday life, and into God’s glorious Creation!

After such a good drive through the Wildlife Loop on Monday, I couldn’t resist and I drove it again (yes, I burned a lot of fuel this week!). The buffalo weren’t much in sight of the road, and the burros had made themselves scarce. However, these photos made it all worth it. 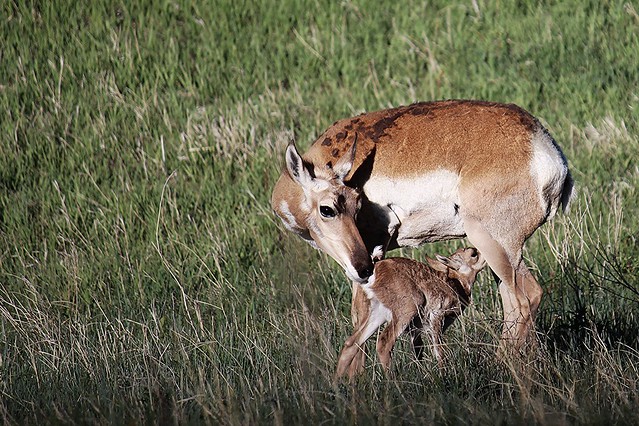 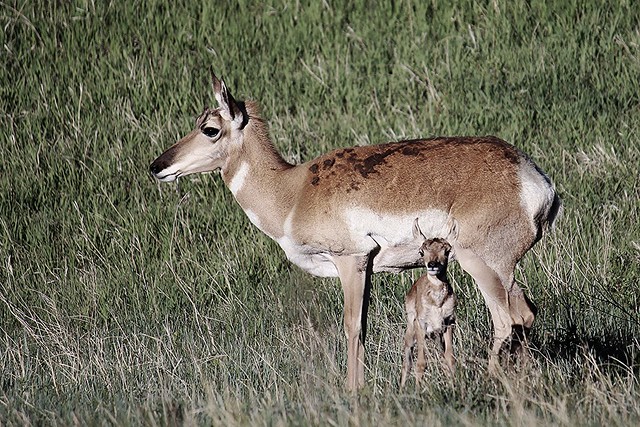 I caught sight of this mama and baby antelope over an embankment, close to the road but almost sheltered from view by the slope and the guardrail. Fortunately, there were no other vehicles behind me to scare them away. Mama antelope was as contented as can be, cleaning her little kiddo’s bum while he nursed. When my little sister saw that picture, her response was: “That’s just wrong.” No, it isn’t! That’s mama antelope taking good care of her little one!

What a darling pair.