After several days of tantalizingly springlike weather, winter decided it wasn’t moving out just yet. Which is just fine with me. “No travel” advisories were issued, and I hunkered down at home to read, edit pictures, and play in the snow. It was a beautiful, still, gentle snowstorm, with areas in the Hills receiving a foot or more of snow. We received a delightful 7 or 8 inches. And it was a wet snow! Wildflower season is coming up! 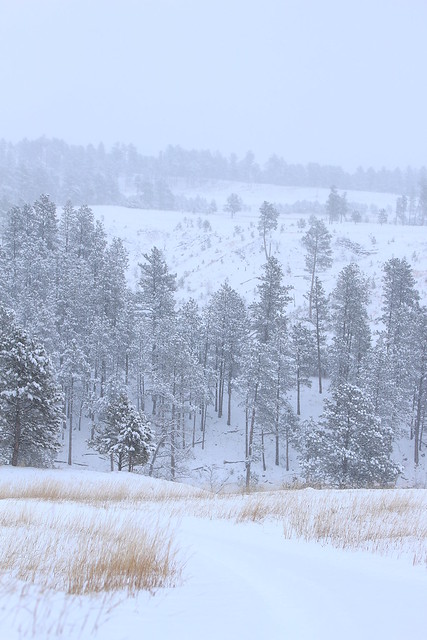 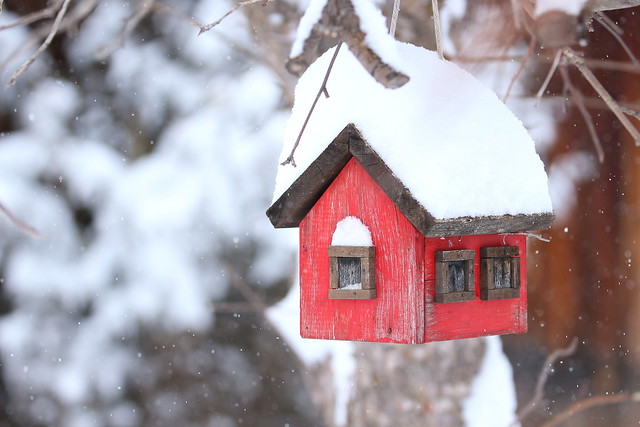 As always, Trixie, our snowdog, was positively invigorated and raced around insanely, with a giant goofy grin on her funny little face. I walked up to Grandma’s to get vanilla for snow ice cream, and along the way Trixie found herself a treasure – a deer leg, perfectly intact. She carried it around and gnawed on the nasty thing. She tried to avoid me, since she doesn’t trust us not to take her treasures away, apparently, and finally resorted to burying it. 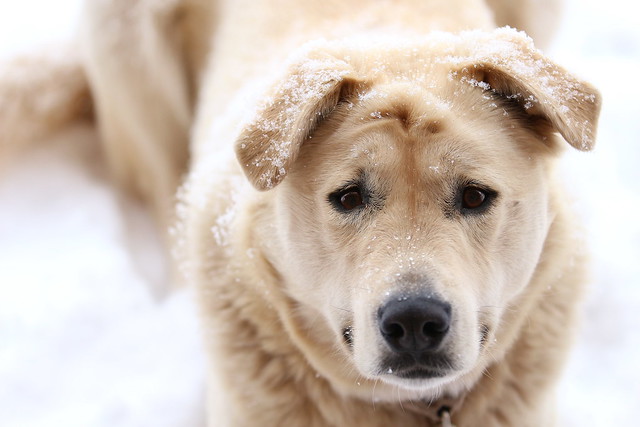 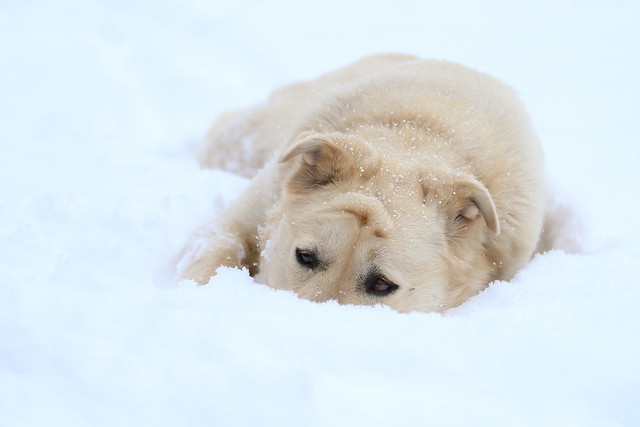 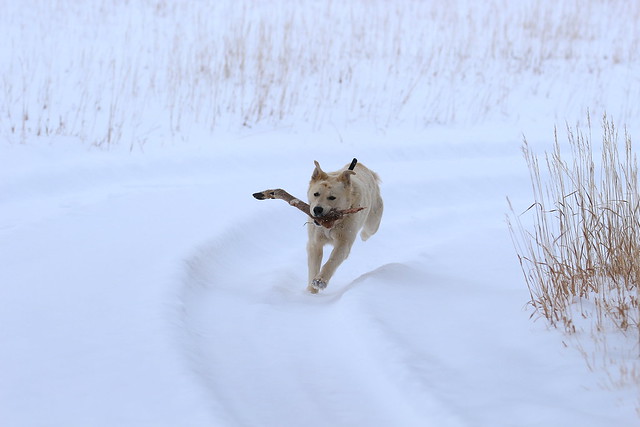 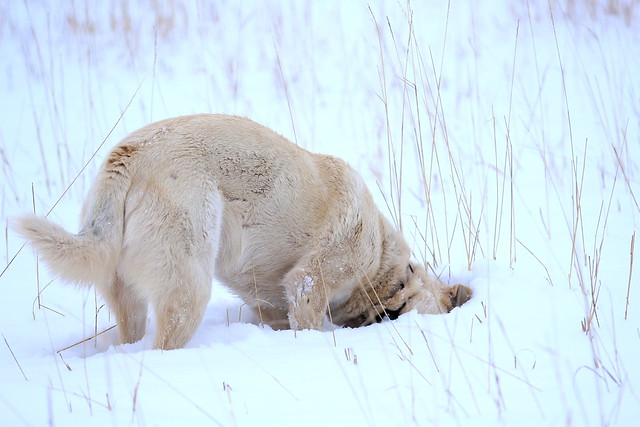 Over the last few weeks, the birds have really started to sing again, and the birdfeeder up at Grandma’s house is routinely covered with a host of the feathered things. Little bird footprints mark the snow beneath the feeder. The tiny creatures hardly seem to feel the cold. 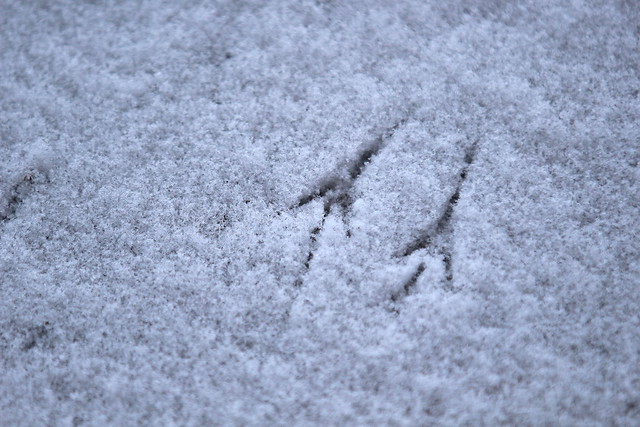 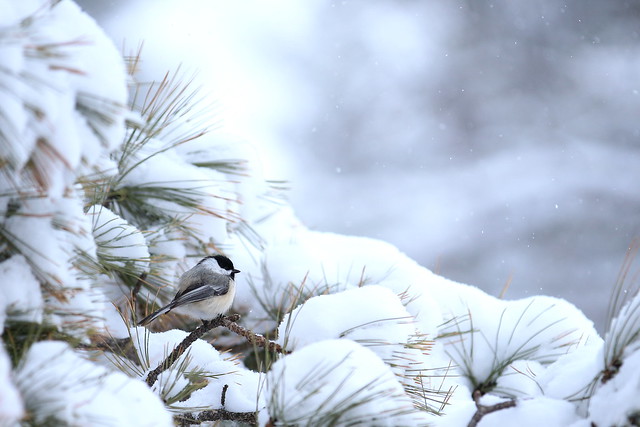 Spring is just around the corner. But for now, I’ll enjoy another rush of winter.

Over lunch break today, I and the other scribe at the clinic went for a walk over by Rapid Creek. We wound up back at Canyon Lake, near where I got pictures of the killdeer nest a few weeks ago. I had gone over there recently to check up on the nest, but there were enough slightly ruffled goose parents and their fluffy yellow chicks, I didn’t want to risk getting flown at. But today, once again I heard the killdeer before I saw it, and even then I could barely see it in the grass near the shore. The bird was almost in the throes its wounded bird imitation, so I knew that either there was another nest and we were close to it, or it had chicks. 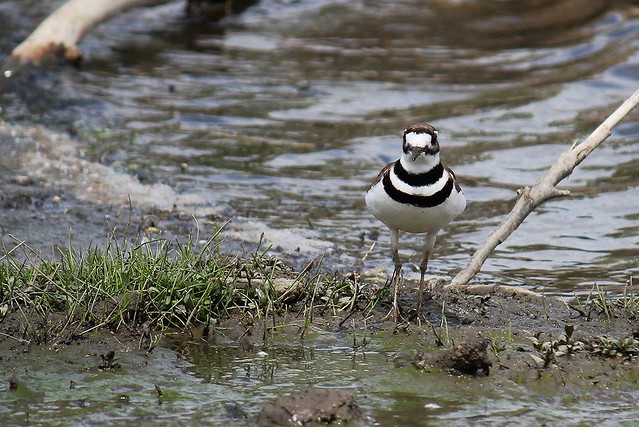 We hunted around for a few minutes, and could see a second killdeer a little ways away. They called to each other, hunkered down in the grass, flew this way and that, and almost had me convinced to come back later. But then there was a little flurry of tiny movement, and not one, not two, but three baby killdeer were scampering around on the shore. 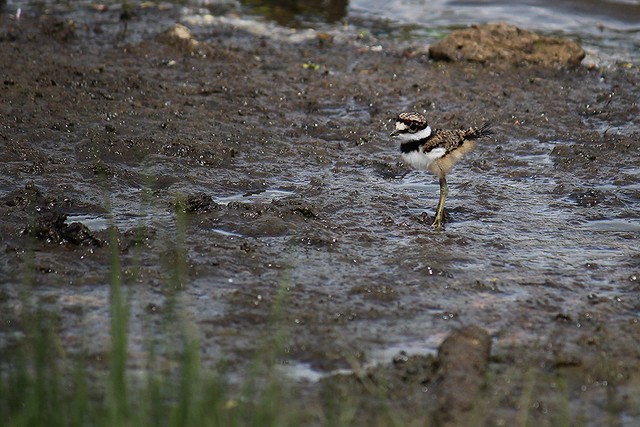 We watched them for probably ten minutes, laughing at their antics and trying not to terrify the parents too much. The babies were almost fearless, but I knew if I got too close, I would have an angry parent flying at my face. The babies’ movements were comical, so perfect and coordinated that they looked almost awkward, their little feathers still downy and short, in spite of their grown-up coloring. 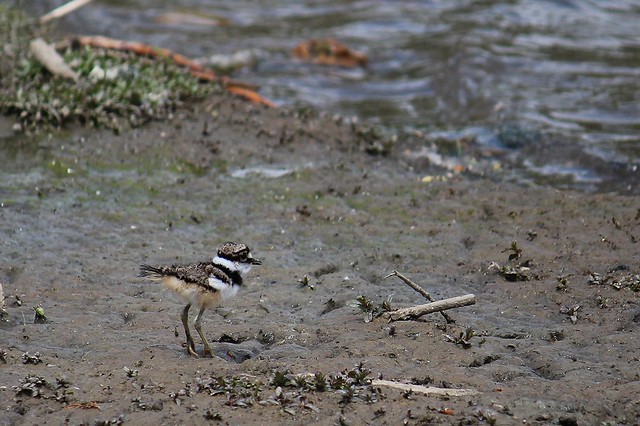 Hard to believe that something that tiny and helpless will be flying and protecting its own nest before too long!

There is nothing like the unmistakable ringing song of a meadowlark in springtime or summer. Perched on a fence post or fence wire, the little brown bird with the warbling voice and the bright yellow throat is a constant sight on the prairies and in the foothills. 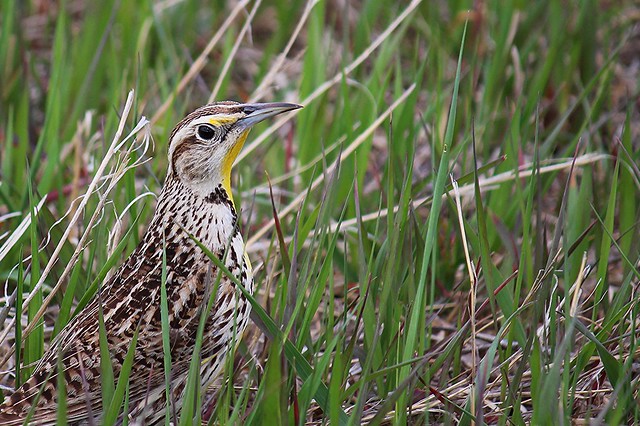 It wouldn’t be springtime in the Hills without the wild, winsome tuning of this little darling.

Yesterday I mused wistfully that Harney Peak frosted white would have been stunning under a clear blue sky. The drive to church this morning didn’t disappoint! We’ve hardly seen the sun in the last week or so, but this morning it finally decided to come out and wake everything up! Amazingly enough, we had left sufficiently early for church this morning so that we actually had time to pull over on Palmer Creek Road on Hwy 244 so I could snap a few pictures. 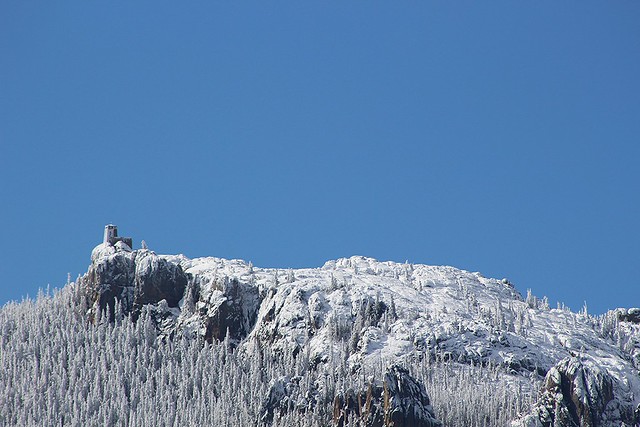 Other than on Harney Peak and the rest of the high-elevation hills which were glazed with frost, everything has greened up, refreshed by the rain and snow we’ve had over the last couple of weeks. Over the next few weeks, spring will truly come rushing in! 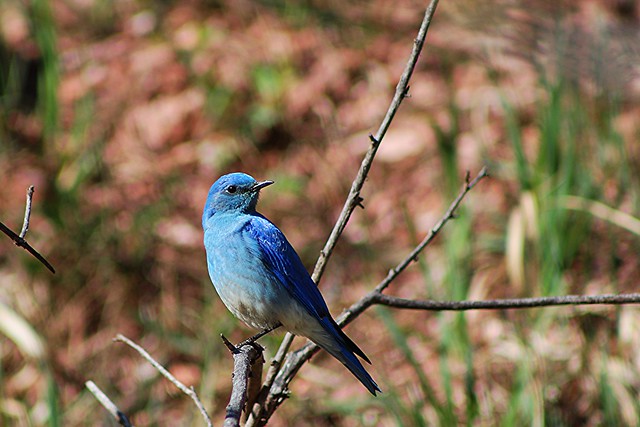 Twitterpated birds are busy nesting, making a racket in every tree. Goldfinches have gotten their summer plumage and no longer look scruffy, and bluebirds flicker brightly in pastures and from fence post to tree to shrub. Meadowlarks are back to sitting on fence wires, singing their little hearts out – What a life!

This really is a glorious time of the year. What other time of the year can one enjoy the serene beauty of winter and all the fire and life of springtime, all in the same day? And I’m really so glad we live in a world with color.  God didn’t need to create color. But He did.

The parental instincts of wildlife are nothing short of miraculous – And, often, a sign that God Almighty has a sense of humor. If you’ve ever taken the time to marvel at a killdeer, and pester him a bit, you should be familiar with the miracle, and the humor. Killdeer are ground nesters, and mama and papa stick pretty close to their eggs to guard it, sit on it, and to steer predators away. 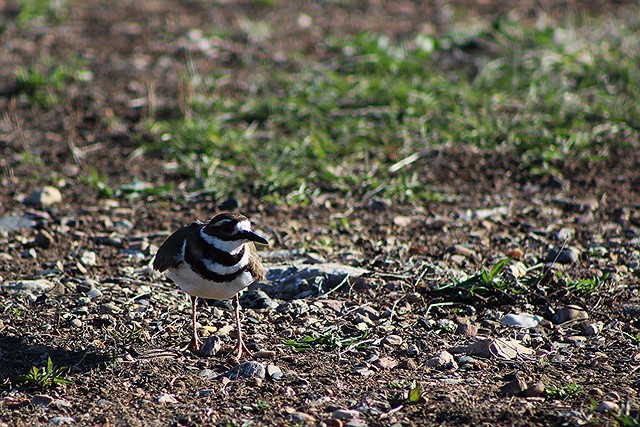 They are birds roughly the size of a robin,  not gifted in areas of strength or intimidation. But they are very talented actors. When a threat is near their nest, mama and papa tag-team to draw the predator away, by keening and taunting, staying just close enough to the predator to keep the attention of the predator, and always moving further away from the nest. But if the threat gets too close or approaches the nest, the little birds launch themselves into a charade of dying birds, flopping around on the ground rather realistically. 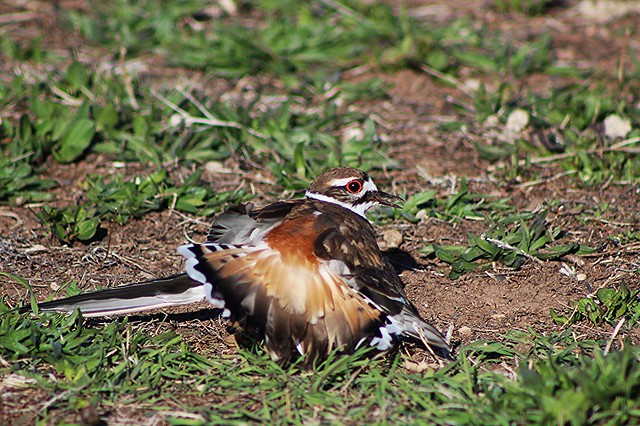 I had been informed of a killdeer nest near the shore of Canyon Lake and went to find it after work today. Sure enough, mama and papa successfully drew me away from the nest the first time, and put on a pretty convincing dying-bird act when I actually approached the nest. As quickly as possible, I snapped a few pictures,  staying a healthy distance from the nest and trying not to look too vicious – I would have felt pretty bad if one of the parents had a heart attack or something. Not to mention, if I had gotten any closer I’m not at all sure that one or both of the parents wouldn’t have flown at my head. Parental instincts, and all. And what beautiful treasures they had to protect! 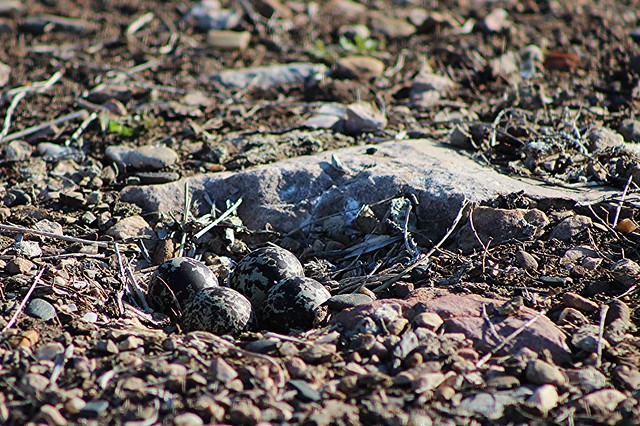 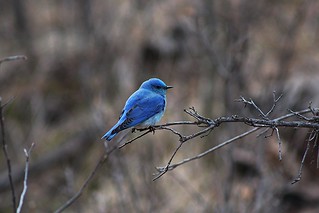 One can cover a lot of beautiful ground by following a well-worn trail, a path countless feet have beaten down, smoothed and deepened. But there is sometimes something in my heart not quite satisfied with simply following a trail – being bound by miles or hours,  not knowing what is over this hill, or what the view looks like from the ridge above. There is something to not following a trail, giving oneself permission to stray to the side, to discovered unseen vistas, or subtle deer trails. There is something delightful about taking the long way around, of creating detours and following one’s sense of curiosity, and allowing oneself to revel in the beauty of the outdoors. 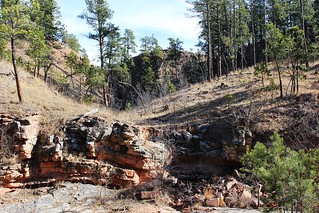 Sometimes that giving in to curiosity and delight comes with simply changing one’s vantage point. Walking along a ravine floor is a completely different view than walking along the rim. The enchantment of rising granite steps, moss covered, and slanting shadows and cool, green lichen contrasts with the beauty of the open sky, the rolling hills, quivering rabbitbrush, and the treelines. A ravine followed from top to bottom, with 5-foot ledges to scramble, looks wholly different when followed from bottom to top. The 5-foot ledges become a different sort of obstacle, when scrambling up instead of down. 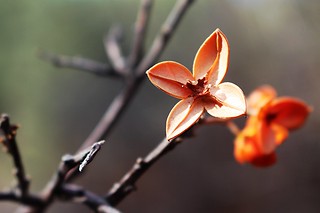 A trail taken in the morning, when the air is cool and warming, when frost and dew shimmer in the grass, when the trees are singing with early birds, when the air in the sheltered valleys is damp and cool and rich, yet warm and fragrant on the sunlit hillsides above – it is entirely other than walking the trail in the afternoon or evening, when the birds have quieted, when the dew of morning has been replaced by the frost of evening, when quiet and hush have settled. 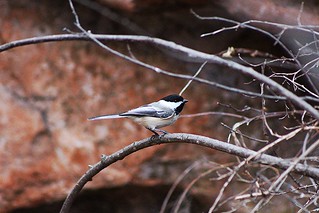 In the morning hours, the chickadees and bluebirds were talking to themselves and flitting from branch to shrub to rock. The bluebirds were like little pieces of sky, so bright and blue. And the chickadees, feisty little masked things, were darting and diving in a ravine, drinking ice melt from a little green pool. I clambered up on the ledge and tried quietly to take out my camera. They watched me curiously or indignantly, I wasn’t entirely sure which, and let me take their pictures before disappearing, their little hoarse, laughing calls disappearing with them. 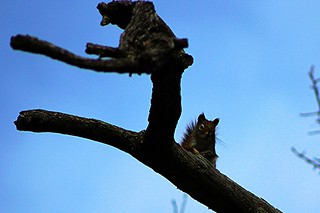 Taking the time to chase down sunbeams on birchbark. Chatting with a sassy squirrel.  Watching migrating flocks of geese. Wondering at ancient trees, wizened and hunchbacked. Slipping and sliding down slopes covered in pine needles and loose rocks, crawling up ledges, ducking under deadfall, plunging into the shadow of the trees, where light filters through the deep green needles and glows and flickers on the bark, the earth, and snow white pieces of quartz – They say to take the path of least resistance. But sometimes the path of more resistance is a lot more rewarding. Giving in to the delight of curiosity, straying from the beaten trail, lingering to watch and listen and breathe deeply of the air. Halted by awe. Driven by a question: What’s next? 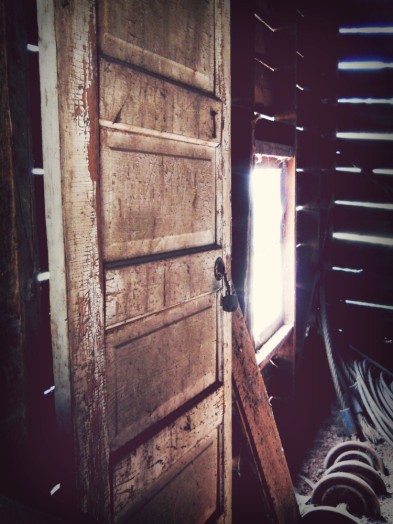 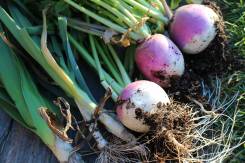 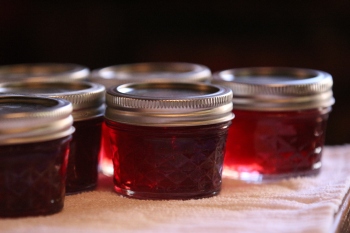