We live under the shadow of a snake-infested ridge.

Okay, so that’s a bit of a stretch, but rattlers have been seen from time to time on the ridge above our house.   Yesterday, I went out to my truck, parked to the right of the old chicken coop, just in time to see two entwined rattlesnakes come tumbling down the face of the ridge and disappear behind the chicken coop.

After a rush of some heavy adrenaline while we made sure the pets were all out of the way, we went back to observe. We watched one of the snakes slither slowly back to the top of the ridge and that was that. Or so we thought. Fifteen minutes later, we heard rattling and ran back over to watch the show. Two snakes, probably the same two, were entwined and rattling furiously above the cliff, on a steep grassy slope. Their curious dance brought them further and further down the slope until they tumbled in a writhing mass off the face of the ridge. Once again, we watched as they slithered back to the top. That was the last we saw of them, and Sarah and I left for an evening hike with Jessie and Roy, two friends from church who live in the neighboring town.

But when we got back that night, and after we had been standing in the yard talking for twenty minutes, Jessie suddenly said, “That’s a snake over there. He’s a big one!”

Sure enough, there was a rattler, coiled up not twelve feet off at the end of our sidewalk. And there had been people coming and going for the last half hour!

We weren’t entirely sure what to do with it, but he sure couldn’t stay there. We watched him for twenty minutes or so, amused by how he reacted to shadows passing over his body when we waved our hands in front of the yard light, listening to the fascinating sound of his rattle, and amazed at how long he could hold his body up, unmoving and perfectly silent. Beautiful and dangerous. We kept our distance.

Finally, it was time to get rid of him. Roy picked him up with a pitchfork like a piece of spaghetti on a dinner fork, and took the angry, rattling creature over to the ridge.

Fortunately, seeing rattlesnakes in this quantity or with this frequency is rare. But it was all still a little unnerving.

We let him go this time. But Mom’s determined to get rid of it for good if we see it again. 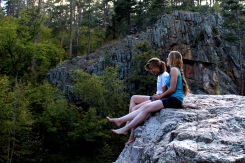 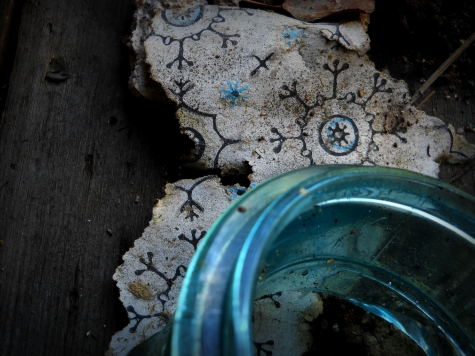 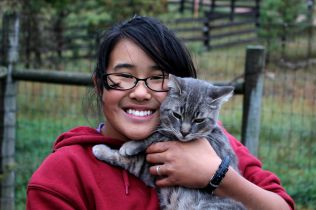